Security forces in Venezuela have arrested 27 members of the National Guard who took part in a public mutiny against the regime of Nicolas Maduro. Previously, the guardsmen urged Venezuelans to take to the streets. 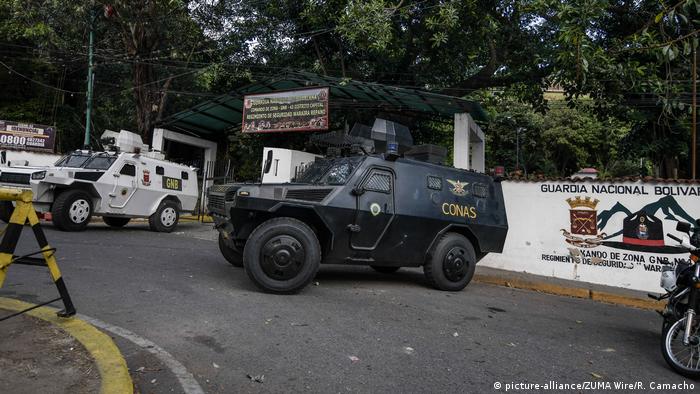 Venezuela's military put down an uprising by a group of soldiers in Caracas on Monday, after surrounding a command post claimed by the mutineers and arresting 25 soldiers. Another two were arrested at a different location, officials said.

"They were neutralized, surrendered and captured in record time," Diosdado Cabello, a close aide of President Nicolas Maduro, said of the rebelling troops.

"They are already confessing details and the first thing they said is that they were offered villas and castles but were left alone, they were tricked," he added, without providing details.

Previously, the mutineers used social media to decry their army leaders and the Maduro regime. A man who identified himself as Sergeant Alexander Bandres Figueroa urged the people to back them up by gathering in the streets.

"You wanted us to light the fuse, so we did. We need your support," he said in a video, with several armed men and a National Guard truck visible behind him.

According to Defense Minister Vladimir Padrino, the men had captured several prisoners, including a police captain, and had raided an outpost for "weapons of war." They then proceeded to a different outpost, where they were captured.

Padrino said the stolen weapons were retrieved and that the rebels would face "the full force of the law."

The mutineers' call to action prompted a gathering in front of the command post, with police firing tear gas to disperse the protesters.

'We are not asking you to shoot'

Maduro has managed to maintain the loyalty of Venezuela's army chiefs, despite the economic meltdown and political chaos in the country.

The uprising comes as government critics prepare for another push against the Maduro administration. The opposition-dominated parliament recently declared Maduro a "usurper" and called for a day of protests on Wednesday.

Ahead of the news of the rebellion, parliament chief Juan Guaido urged the military leaders to break ranks with Maduro.

The parliament also offered amnesty to the members of the military and state officials if they abandoned Maduro.