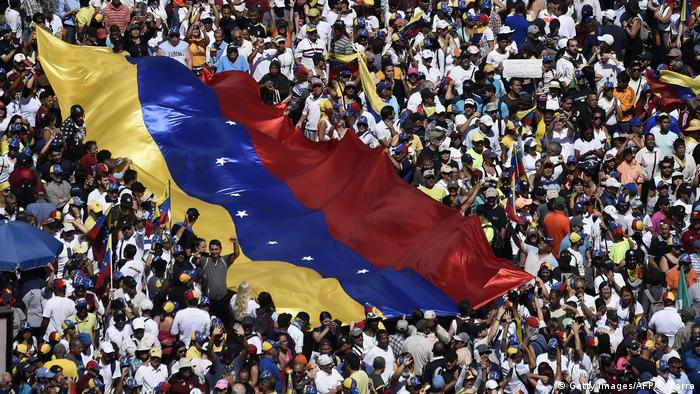 Venezuela's self-proclaimed interim president, Juan Guaido, on Saturday called for a "peaceful show of force" against Nicolas Maduro's government, his latest bid to force the socialist leader from office.

Guaido's opposition movement organized 333 anti-government marches across the country, with a key event held in the capital, Caracas, attended by more than 100,000 people.

Nearly two weeks after declaring himself acting head of state, Guaido told supporters that "change in Venezuela is imminent."

"Maduro isn't protecting anybody, the Constitution is," he insisted. 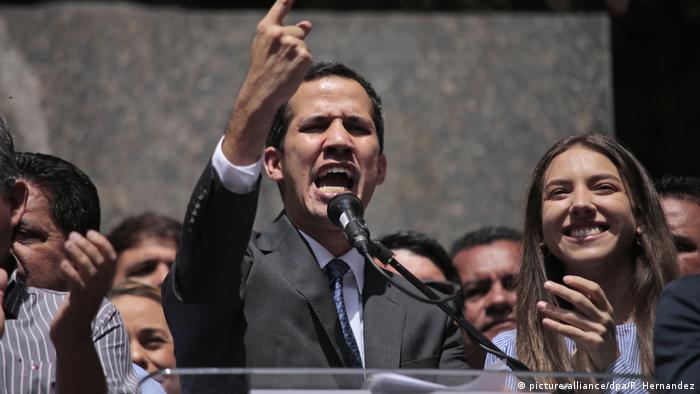 Guaido called for a further protest on February 12, before turning to the plight of those worst hit by the country's economic crisis.

Guaido: Aid on its way from abroad

"Today we announce a global coalition for humanitarian aid and freedom in Venezuela," Guaido said, adding that the opposition would soon start distributing aid from Colombia and Brazil.

He urged soldiers to allow the flow of vital supplies, which Maduro has so far barred, into the country.

Thousands of state employees and Maduro supporters, including members of a pro-government militia, gathered at Bolivar Avenue in central Caracas.

In front of his own supporters, Maduro once again proposed holding early elections for the National Assembly (NA) this year. The suggestion is seen as an attempt to outmaneuver the opposition, which controls the country's legislature.

Maduro said it would be up to the pro-government Constituent Assembly — which he set up in 2017 to weaken the NA's power — to decide whether or not to back his proposal. 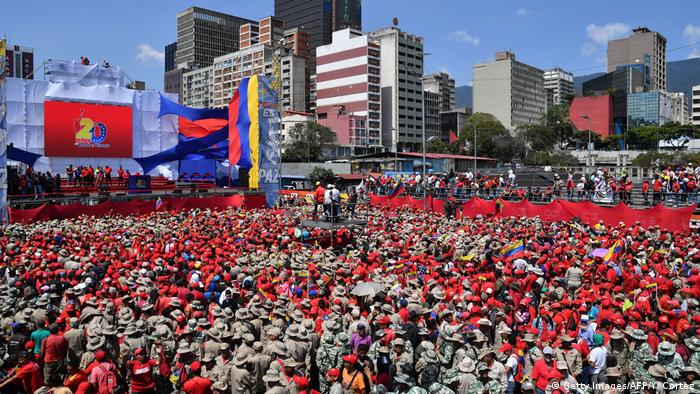 Maduro's supporters gathered in another part of Caracas to mark the 20th anniversary of the rise to power of his socialist predecessor, Hugo Chavez

Sunday deadline unlikely to be met

Earlier this week, key European countries gave Maduro an ultimatum, threatening to recognize Guaido as president if the government fails to call for fresh elections by midnight on Sunday.

Guaido supporters vowed to ratchet up the pressure on Maduro ahead of the deadline.

Protester Ziomara Espinoza, 59, said she felt a change of energy among the anti-government crowd.

"We are around the corner from freedom," she was quoted as saying by The Associated Press.

Hours before the rival rallies were set to start, a senior officer of the military's high command rejected Maduro's authority and endorsed his opposition rival.

In a video circulating on Twitter, the uniformed man identified himself as Air Force General Francisco Yanez, before denouncing Maduro's "dictatorial and irritating authority."

"I recognize Juan Guaido as the president in charge of the Bolivarian Republic of Venezuela," he said.

"The time for democracy has arrived," Yanez added.

The general said that "90 percent" of the armed forces were against Maduro, and called on civilians to "take to the streets and peacefully defend our president Juan Guaido."

The air force general also said that "friends of democracy" were telling him that the embattled Maduro had "two planes ready at all times." In the video, he proclaimed: "Let him leave!"

Venezuela's high command lists Yanez on their website as the head of air force strategic planning, complete with a photo resembling the man in the video.

On its Twitter account, the country's air force slammed Yanez as a "traitor" who "kneels before imperialist pretensions."

Yanez is the second high-ranking military officer to openly endorse Guaido, a week after Venezuela's military attache to the US, Jose Luis Silva, resigned from the post and called for new elections.

The military is a key pillar of support for the deeply unpopular Maduro and until now, they have maintained their allegiance to his government. But Guaido has claimed he has had "clandestine meetings" with leaders of the military and security forces and tempted them to switch sides with offers of amnesty.

EU foreign ministers had almost found a common position on Venezuela, but they just barely missed the opportunity to support the opposition leader. It is an infuriatingly avoidable failure, writes Barbara Wesel. (02.02.2019)