EU foreign ministers had almost found a common position on Venezuela, but they just barely missed the opportunity to support the opposition leader. It is an infuriatingly avoidable failure, writes Barbara Wesel. 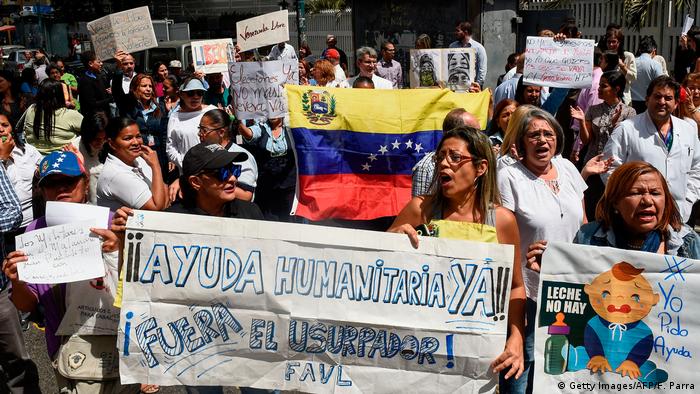 On Thursday, the European Parliament voted to recognize Venezuelan opposition leader Juan Guaido as interim president. Although it is not normally the parliament’s job to make such declarations, the measure was a symbolic show of support for the embattled President Nicolas Maduro's opponent.

At the same time, EU foreign ministers were gathered in Bucharest at one of their regular meetings. This would have been an opportunity to add to its recognition a crucial aspect: A joint declaration of support for the opposition in a country sinking into chaos. But this failed — only because of a single minister's resistance, as was later revealed. With a bit more effort and willingness, perhaps an agreement would have been possible.

And so, a possibility for one of the rare positive signals of unity in European foreign policy was wasted. But the sole holdout was not entirely to blame; the failing also has to do with the weak structure of the leadership. Every six months, a different country takes over the presidency role for the EU Council and summits. Romania currently has this role, and has filled it with its government, shaken by corruption scandals and a striking lack of presentable and experienced politicians. The discussion on Venezuela unfortunately revealed all the system's weaknesses.

Finland had offered to relieve the poorly prepared Romanians of their council presidency ahead of its beginning on January 1, but Bucharest would not agree to it. Had that occurred, the government in Helsinki would certainly have managed to pass a resolution on Venezuela. In this case a particularly weak EU member state occupying the president's role met with a breakdown of the system.

The EU could certainly make itself useful in Venezuela, even if it has little historical foothold there. As Russia and the US continue to trade barbs over their spheres of influence, the EU could take up the role of negotiator and facilitator, especially for the Venezuelan people suffering due to the complete breakdown of essential services. President Maduro has not yet granted access for humanitarian aid, which is why the mass exodus continues. And Maduro is now aggravating the situation by arresting foreign journalists and making their work impossible. There is every indication that the struggle between the regime and the opposition is now entering its decisive phase.

The decision could have been so simple

Against this backdrop, it should not have been so difficult for the EU to take a stand and put aside political ambivalence. However Moscow and Washington define their political interests in Venezuela, Europe could have sent a clear message by siding with the opposition.

Almost all EU states will gradually declare their support for Guaido over the next week. But with this method, the message and a rare chance for common ground will peter out. Europe is stronger when it sticks together, especially on foreign policy. This failure in Bucharest is simply an exasperating disappointment  — and one that could have been avoided.

Venezuela's socialist rulers have lived well off the nation's oil industry for many years. But planned US sanctions could call time on Nicolas Maduro's rule and stop the flow of foreign currency. (01.02.2019)

Supporters of Nicolas Maduro took the streets in central Caracas as opposition backers gathered for a rival rally in a different area of the city. Previously, an air force general publicly renounced Maduro. (02.02.2019)

Brexit: UK to restart trade talks with EU after threatening to quit 32m ago