One week after Juan Guaido declared himself acting president his supporters have hit the streets again in protest. Guaido revealed he had held secret meetings with the military. 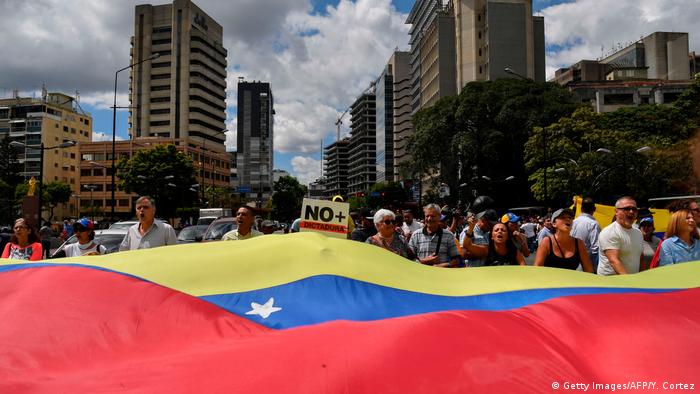 Thousands of Venezuelans took to streets across the country on Wednesday in support of self-proclaimed interim president Juan Guaido and demanding that President Nicolas Maduro step down. They ended the walk out by singing the national anthem.

A broad cross section of people voiced their desire for a different future for the embattled South American country in what organizers say were protests in 5,000 cities and villages. Some, like physician Hugo Rosillo, were protesting the dire medical situation that has gripped the debt-ridden state. Rosillo said that his hospital had been turned into a "storeroom for cadavers" because he and his colleagues lacked the medicine needed to treat curable illnesses.

The protests took place exactly one week after Guaido declared himself interim president to tens of thousands of cheering supporters.

In a New York Times article, Guadio said he had held "clandestine meetings with members of the armed forces."

"The military's withdrawal of support from Mr Maduro is crucial to enabling a change in government," he wrote. "The majority of those in service agree that the country's recent travails are untenable."

'We don't want to leave the country'

Guaido himself made a surprise appearance in Caracas. He said that a Supreme Court decision barring him from leaving the country was of no concern, saying: "We don't want to leave the country. We want people to return."

Millions of Venezuelans have fled the country since its turn to socialism under former President Hugo Chavez. The situation has worsened substantially under Maduro, who has overseen a catastrophic economic downturn that has driven inflation to more than one million percent.

Maduro, who has led the oil-rich country since taking over from Chavez in 2013, has thus far refused to step down, claiming that he is the country's rightful president. Many international observers say that his 2018 reelection — which was boycotted by the opposition — was a sham.

Maduro has appeared on state TV daily, flanked by military leaders in a show of strength. The United States, which signaled support for Guaido before his declaration and publicly recognized him as the country's rightful leader just minutes after he made it, has said that Maduro's support among the military is crumbling.

US Special Envoy to Venezuela Elliot Abrams said that although the generals may still be with Maduro, rank-and-file soldiers are not. Guaido has consistently made pleas to the military to stand with the people, not with their oppressor.

'Will you defend your commander-in-chief?'

Maduro has claimed that the United States is attempting an overthrow, and warned the US that it should avoid another Vietnam.

Several US officials cautioned Maduro not to make any moves against Guaido, who is the duly elected leader of the opposition-controlled National Assembly. Abrahms said, "The security of interim President Guaido is a concern," noting that action against him would be an "extremely foolish move." National Security Advisor John Bolton said Venezuela would face "serious consequences" if anything should happen to Guaido.

Last week the US raised concern by saying "all options are on the table" including military action.

European leaders have warned against heavy-handed reactions by Maduro and his security forces. On Wednesday, German Foreign Minister Heiko Maas was clear about the need for Maduro to to step aside: "To be clear: Nicolas Maduro lacks any democratic legitimacy. He is not the democratically elected president of Venezuela." Maas said free and fair elections needed to be held quickly.

Though Maduro told reporters from Russian state-run RAI Navosti news agency that he would be willing to meet with opposition leaders to find a way out of the impasse, he has said nothing of new elections.

The United Nations says that Venezuelan authorities arrested some 700 people in a one-day crackdown last week, and that some 40 people were killed. Maduro and his allies have placed blame on the opposition for the ensuing violence and have said that the death toll is exaggerated.

Opposition leaders have called for another mass protest on Saturday.