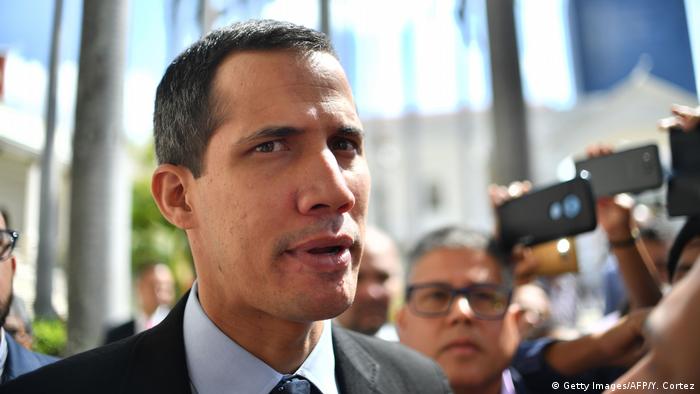 Venezuela's Supreme Tribunal of Justice on Tuesday imposed a travel ban on opposition leader Juan Guaido and froze his bank accounts, the president of the court said.

The United States, which announced sanctions against Venezuela's state-run oil company on Monday, warned the South American country against taking measures against Guaido.

In a tweet earlier Tuesday, US National Security Adviser John Bolton warned of "serious consequences" if the investigation request from Saab, who Bolton called an "illegitimate former Venezuelan Attorney General," was approved.

Guaido, who as thus far avoided arrest since his declaration, said earlier Tuesday that he did not underestimate the threat of imprisonment, but did not believe it was "anything new."

"We are here. We will keep acting and working to confront the humanitarian crisis," Guaido told a news conference outside Venezuela's national assembly.

Guaido attempts to seize power: On January 23, Guaido declared himself the acting president, telling supporters in front of the National Assembly that he would install a "transitional government and hold free elections." The declaration came less than two weeks after Maduro, who won re-election in a vote the opposition called illegitimate, was sworn into office for his second presidential term.

International support: Guaido's move has received backing across the globe. The US, Brazil, Canada and the Organization of American States voiced their support for Guaido. The European Union has yet to formally endorse the opposition leader, though German Foreign Minister Heiko Maas said Berlin supported new elections in Venezuela.

Read more: Venezuela crisis: How the world sees it

Maduro rejects snap election: Maduro on Wednesday rejected calls for a snap presidential election, but said "it would be very good" to conduct early parliamentary elections. "Presidential elections in Venezuela have taken place, and if imperialists want new elections let them wait until 2025," Maduro told Russian news agency RIA Novosti, in an apparent reference to Washington.

Maduro's court: Several members of Venezuela's Supreme Court are close allies of Maduro. The court seized power from congress in March 2017, a move that the opposition-controlled legislature at the time characterized as a "coup," but reversed the decision a day later. Former Supreme Court Justice Christian Zerpa, who fled Venezuela to the United States earlier this month, said that the court was an "an appendage of the executive branch," claiming the court often got instructions directly from the presidential palace.

Opinion: Venezuela at a crossroads