EU nations get behind Venezuela′s Juan Guaido as acting president | Europe | News and current affairs from around the continent | DW | 04.02.2019

EU nations get behind Venezuela's Juan Guaido as acting president

The EU is increasing the pressure on Venezuela's President Nicolas Maduro to call elections, after a raft of EU states recognized his rival Juan Guaido as interim president. Italy reportedly blocked a joint EU statement. 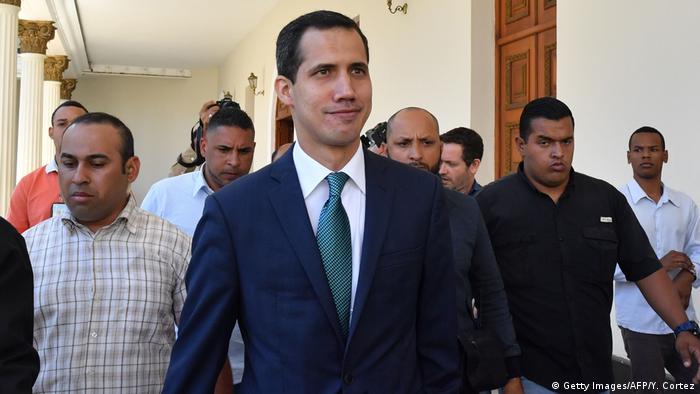 What started as a trickle has turned into a flow of EU countries who have now officially declared Guaido as interim president.

The coordinated move to recognize Guaido by France, Spain, Germany, Britain, Portugal, Sweden, Denmark, Austria, the Netherlands, the Czechia, Latvia, Lithuania, Finland and Luxembourg comes after the expiry of an eight-day ultimatum for Maduro to call a new election.

German Chancellor Angela Merkel, who is on a two-day visit to Japan, said at a news conference that "we recognize Juan Guaido as interim president of Venezuela, tasked with starting the political transition and leading the country to free, transparent and credible elections." She added that she hoped Guaido would initiate those elections as "quickly as possible."

Foreign Minister Heiko Maas said that Germany, once the political circumstances allow it, would also consider providing humanitarian assistance worth €5 million ($5.7 million) to help ease the plight of Venezuelans who are suffering the effects of a country in economic free fall.

Spain was the first leading EU country to recognize Guaido as interim president.

A spokesman for Prime Minister Theresa May said the UK was looking at options to help expedite peace and democracy in Venezuela, including the use of sanctions. At this stage, it appears that sanctions on individuals rather than measures that would affect the public, such as the oil sector, are being considered.

Italy stopped short of recognizing Juan Guaido on Monday after it reportedly blocked a joint EU declaration on the political crisis.

Instead, Rome said that it "supports the desire of the Venezuelan people to soon hold free and transparent presidential elections in a peaceful and democratic process."

The two ruling parties in Rome are split over the issue.

While the far-right League is in favor of ousting Maduro, the Five Star Movement fears chaos or a possible military intervention in Venezuela, according to the DPA news agency.

Europe's support has not gone down well with Russia, one of the first countries to throw its support behind Maduro as the crisis evolved. The Kremlin on Monday described European backing for Guaido as foreign "meddling" and repeated its stance that domestic issues should be solved by Venezuela and its people.

Meanwhile Guaido, already recognized by the US, Canada, Australia and several Latin American countries, said he would soon lobby the EU for badly-needed humanitarian and economic aid.

The question is whether the latest pressure will actually make a difference. So far Maduro has rejected and ignored EU ultimatums. On Monday the government said it would revise bilateral ties with those EU member states that have now officially recognized Guaido.

In a statement, the government said it "expresses its most energetic rejection of the decision adopted by some European governments, in which they officially submit to the US administration's strategy to overthrow the legitimate government of President Nicolas Maduro."

Later this week a so-called international contact group of four Latin American and eight European countries is set to meet in Uruguay to discuss the situation in Venezuela.