There is a solid case to be made for regime change in Venezuela as advocated by the US and many of its allies. Still, scholars say, the US' record and some key Trump administration players are cause for concern. 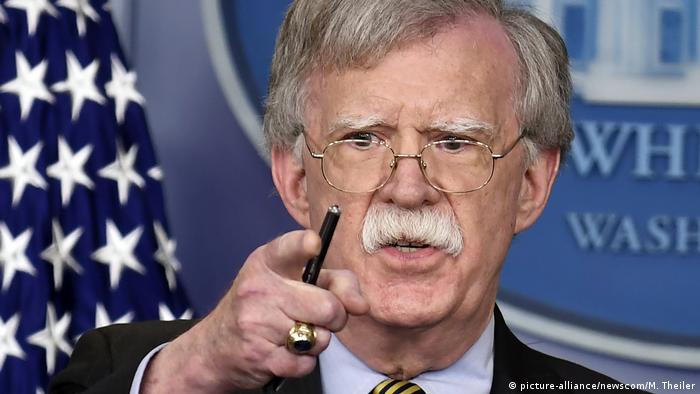 After years of economic disintegration led to widespread hunger, hyperinflation and the exodus of some 3 million people from what should be one of the richest countries in South America, the United States, followed by many European countries, finally decided to call for regime change in Venezuela.

Both the Trump administration and EU countries, including Germany and France, recently recognized opposition leader Juan Guaido as Venezuela's legitimate interim president instead of Nicolas Maduro, who was inaugurated recently for a second term after a highly controversial election victory.

The situation in Venezuela has gotten so dire that even scholars who are traditionally deeply skeptical about US regime change efforts, find it difficult to categorically reject such a move in this case.

"I am generally on the record as opposing this sort of thing," said Barry Posen, a prominent proponent of the realist school in international relations who directs the Security Studies Program at the Massachusetts Institute of Technology (MIT). In his most recent book, Restraint, Posen argued for a more limited US role in global affairs.

But, Posen said, "there are millions of Venezuelans who voted with their feet to leave the country, and it looks to the naked eye that the economy is in a kind of free fall, and the politics of the regime seem to do things to further divide the country, not unify it."

"This is Saddam Hussein-class mismanagement," Posen said, comparing Venezuela's Maduro to the Iraqi leader who was toppled after a US-led military intervention in 2003. Hussein was ousted by force. That may not even be necessary in Venezuela.

"It may not even come to the need for some sort of Western military action. This regime may begin to biodegrade before your very eyes," said Posen who noted that the actions of the Maduro government were deemed egregious enough that most Latin American countries, Canada and most European countries have backed the Trump administration's call for regime change in Venezuela.

"This is an extraordinary combination of political forces, that folk who otherwise would be at odds with the Trump administration, would be in agreement on this matter," said Posen. But while he cannot entirely oppose this latest effort by the US to oust a foreign government, he also cannot fully back it. 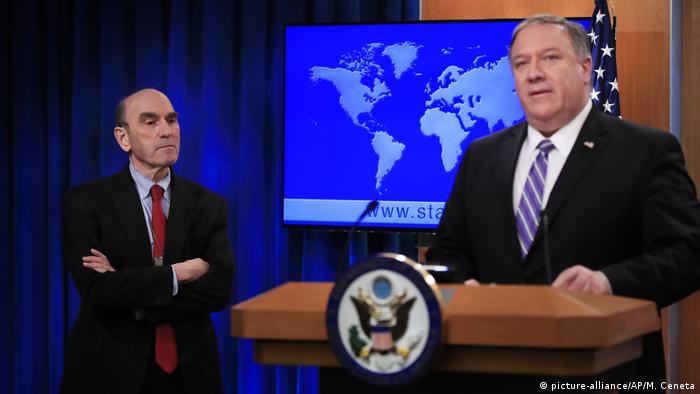 Special Envoy for Venezuela Abrams with Secretary of State Pompeo

"Every now and then I have been moved to support one and usually I regret it after the fact because usually, it has gone bad – even the ones that seemed like they made sense," said Posen. "So I am pretty much a once burned skeptic - but this doesn't mean that this might not be the one."

"Both my research and that of a number of scholars on regime change have found that it tends not to improve the political and economic relations between the countries, rarely leads to democracies and whether the operations are conducted covertly or overtly they tend to increase the likelihood that the target civil war and things like mass killings", said O'Rourke. "There is very little reason for optimism."

President Trump has repeatedly not ruled out military intervention and opposition leader Guaido has not ruled out backing such a move,

O'Rourke does not think military action is imminent or likely. But she strongly advises against it because of the negative consequences even a successful intervention could have in a country where according to polls a majority of people hold an unfavorable view of the US.

"Potentially they could topple the regime," she said. "But I think they would just be opening up a Pandora's Box of other problems in that case. It would be very likely to incite a nationalist backlash against the United States."

But it is not just the bleak record of US military interventions that gives O'Rourke and Posen pause, it is also the record of key Trump officials driving the administration's Venezuela policy: Trump's hawkish National Security Advisor John Bolton and newly minted special envoy for Venezuela, Elliott Abrams.

Bolton's general neoconservative leanings have been well reported. But his recent designation of Cuba, Venezuela and Nicaragua as the "troika of tyranny" garnered comparatively little media attention. But in a speech in Miami, the day before the midterm elections, in language clearly reminiscent of Bush's "axis of evil" coinage, Bolton made a bold promise. "The Troika of Tyranny in this Hemisphere — Cuba, Venezuela, and Nicaragua — has finally met its match," he vowed.

Like Bolton, Abrams also served in a senior role in the Bush administration. As the president's Deputy National Security Advisor for Global Democracy Strategy, Abrams worked on "the promotion of democracy and human rights."

But Elliot also served as an Assistant Secretary of State for Western Hemisphere Affairs during the Reagan administration where he backed military support for Nicaraguan rebels, the so-called Contras. He became enmeshed and was convicted in the so-called Iran-contra arms affair, but then pardoned by President Bush.

Elliot, according to a Human Rights Watch report, also played a controversial role in the 1981 El Mozote massacre in El Salvador where close to 1000 people were killed by American-trained troops. "During the Senate hearing, Assistant Secretary of State for Human Rights Elliott Abrams artfully distorted several issues in order to discredit the public accounts of the massacre," concluded the report.

The involvement of Bolton and Abrams, who was reportedly being considered for a top State Department role early on until Trump found out that he had criticized him, is cause for concern, noted the scholars. 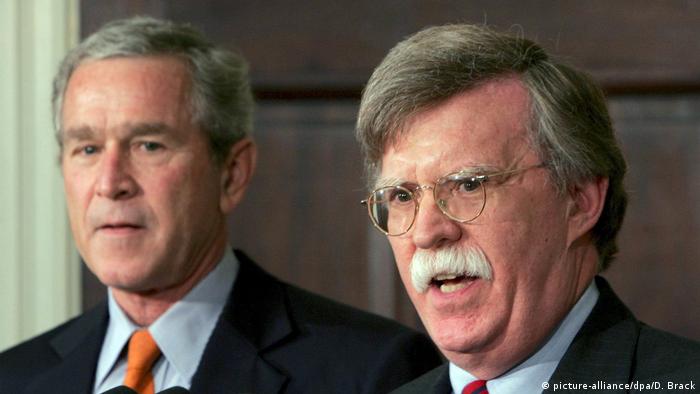 "When you are trying to make sense of these things you have working hypotheses," said MIT's Posen. "And one of them is this is a kind of a little neocon project. The stars have aligned to let this neocon project come to fruition. That's one very viable hypothesis here. But it's not the only one."

He added that Washington's stance vis-à-vis Venezuela could also be designed to put Tehran on notice. "It is certainly not beyond Bolton to imagine a good way to get a message to Iran is to take the Venezuelans who are weaker and closer at hand and crush them to let the Iranians know you might be next and these are the tools we have."

For O'Rourke, the emergence of Bolton and Abrams as key players and Bolton's rhetoric has triggered a déjà vu effect. "Yes, absolutely," she said. "Some of his language down to the "troika of tyranny" sounds awfully reminiscent of the "axis of evil". It's kind of surprising to me actually how similarly they have framed some of the topics and somehow the talking points are being repeated for all these different countries."

Venezuela's embattled leader Nicolas Maduro has rejected an ultimatum from European countries to call elections. The move clears the way for seven EU countries to recognize his rival Juan Guaido as president. (03.02.2019)

The self-described interim president said police special forces went to his home in search of his wife, while his baby daughter was there. Venezuelan police said the allegations were "totally false." (01.02.2019)