Talking to DW, Kuleba said Zelenskiy "fully realizes how difficult it is to make a deal with Russian President Vladimir Putin and make him withdraw from Ukraine and de-occupy Donbass."

Kuleba was in Berlin for talks with German Foreign Minister Heiko Maas.

After the meeting, Maas once again called for a cease-fire in eastern Ukraine. He said that a solution to the conflict is possible "only through a permanent and verifiable cease-fire" upon the terms of the Minsk agreement.

"Ukraine has recently demonstrated that pragmatic action is possible during the recent mine clearance program," Maas said, calling on all parties to compromise.

Key to this are further crossings along the frontier between Ukranian troops and pro-Russiam rebels. There are currently only five along a 400-kilometer front.

Kuleba said that Ukraine was "very open to broad compromises". But there are "red lines" that should not be crossed, which include Ukraine's national security, sovereignty and territorial integrity. 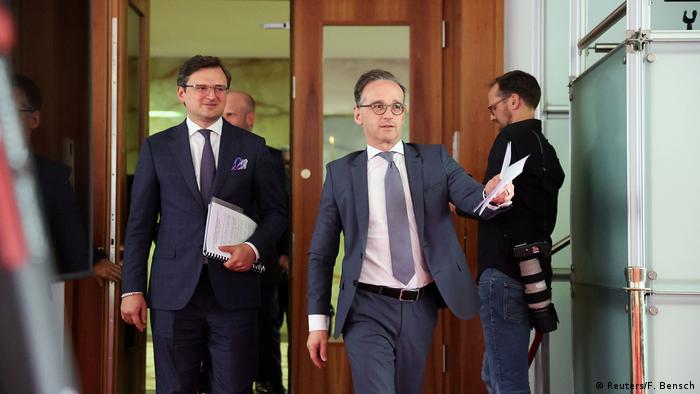 On Crimea and Donbass

After Tuesday's meeting, Kuleba called for support from Germany on the Crimea issue.

"We should not also forget Crimea, which also has to be de-occupied," said Kuleba, talking about the region that saw the worst East-West crisis in the post-cold war era, when the pro-Moscow Ukranian president Viktor Yanukovych was removed from office during the 2014 Ukranian Revolution.

Russia then moved to seize control of the Crimean Peninsula. In a controversial referendum that followed, the region which has a Russian-speaking majority, voted to join Russia. Ukraine and the West declared the referendum illegal.

Kuleba also spoke about the Donbass region in eastern Ukraine where an armed conflict between Ukrainian troops and pro-Kremlin separatists has raged since 2014.

Russia supports the pro-Kremlin separatists in the conflict, who have proclaimed the so-called People's Republics in Luhanskand Donetsk. Over 13,000 people have been killed in the conflict.

"We will never surrender sovereign control over Donbass or over Crimea, and it doesn't matter how much time it will take us, but we will deoccupy those territories and reintegrate them into Ukraine," Kuleba told DW.

Efforts to explore a peace solution had recently stalled again. A summit of heads of state and government in the so-called Normandy format — Germany, France, Ukraine and Russia — originally slated for April, had been canceled due to the coronavirus pandemic.

"We suggest to Russia a very simple solution: We will never cross our red lines, which are sovereignty and control of our border. In return we are ready to negotiate the special status of those regions within Ukraine, without providing them with the right to have a veto on any nationwide decisions," said Kuleba.

Longing for peace in Ukraine

Kuleba's meeting with his German counterpart is being seen as an attempt to lay the diplomatic groundwork for the next meeting between the presidents of Russia and Ukraine.

"I believe that diplomacy does have a chance. We will make an effort to take that opportunity and take that chance to achieve the goal. It is a difficult exercise because it is difficult to negotiate with Russia, but with such a partner as Germany and particularly Minister Heiko Maas, who has demonstrated a very clear commitment to facilitating the process, we hope, to make progress and achieve the goal," he said.