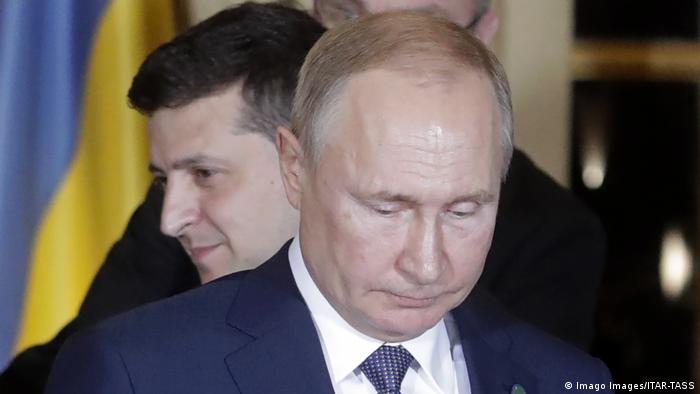 Pro-Russian rebels in eastern Ukraine on Tuesday signaled their willingness to participate in a ceasefire agreed in France the previous day. Russian President Vladimir Putin and his Ukrainian counterpart, Volodymyr Zelenskiy, signed a deal, mediated by France and Germany, to withdraw forces from the conflict zone by the end of March 2020.

The EU also voiced its support on Tuesday, saying it welcomed the "important" steps being taken, but cautioned that concrete steps must be taken quickly or the truce would risk the same fate of the oft-violated 2015 Minsk ceasefire.

"Their quick and thorough implementation is essential and would have a direct positive impact on the lives of people in eastern Ukraine on both sides of the contact line," an EU spokesman said in a statement.

'Putin does not lose and Zelenskiy will not win'

One of the key agreements of the deal is a prisoner swap, but while the separatists welcomed the deal, they said they would be willing to swap 53 Ukrainians for 88 rebels, in a sign that the ceasefire might already be on precarious ground. The day before, Zelenskiy had said 72 Ukrainian prisoners would be home before the year's end.

Casting further doubt on the process was recently elected President Zelenskiy seeking to distance himself from the deal's consequences, claiming, "It's a very difficult situation; we are hostages of the Minsk deal.''

"Many questions were tackled and my counterparts have said it is a very good result for a first meeting. But I will be honest, it is very little; I wanted to resolve a larger number of problems," Zelenskiy said.

One of the major sticking points for the Ukrainian president is the issue of border controls between Russia and Ukraine. He wants to be sure there is solid protection there before the local elections sought by Moscow and the rebels.

Putin, for his part, has sought sweeping autonomy for the rebel-held regions and said that Ukraine should provide amnesty to rebel fighters.

Wolfgang Ischinger, who chairs the annual Munich Security Conference, summarized the situation on Twitter: "De facto, Berlin and Paris accept the perspective of a frozen conflict. Thus, Putin does not lose, and Zelenskiy will not win. Not good at all. But could have been a lot worse."

The war in the breakaway region of Donbass began in 2014, shortly after a change of government in Ukraine and Russia subsequently annexing the Ukrainian Black Sea peninsula of Crimea. At least 13,000 people have died and more than 1 million Ukrainians have been displaced by the conflict.

Ukrainian President Volodymyr Zelenskiy, who has said resolving ongoing disputes with Russia would be his top priority, has called for internationally mediated talks. Moscow says it will consider the request. (08.07.2019)

Leaders of Ukraine, Russia, Germany and France have agreed to revive their "Normandy format" Ukraine talks for the first time since 2014. The renewed effort follows several breakthroughs over the summer. (15.11.2019)