German Foreign Minister Frank-Walter Steinmeier has called for a second international conference in Geneva. He said one way to "put an end" to Ukraine's violence was OSCE mediation at local level across Ukraine. 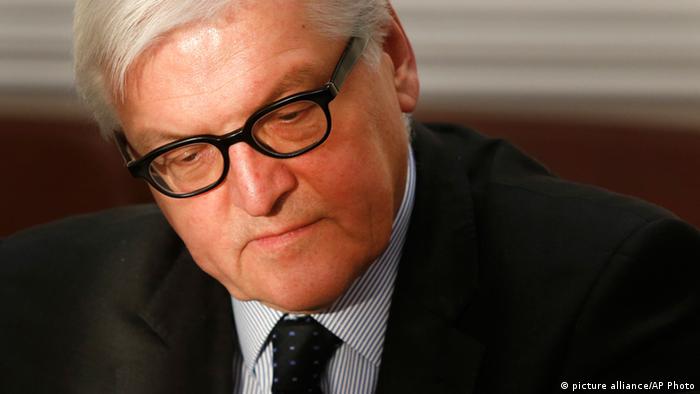 Germany called on Sunday for a second Geneva conference to defuse the escalating crisis over Ukraine as Russia and Kyiv continued to accuse each of undermining a previous deal reached in April.

Steinmeier said he had proposed a fresh round of Geneva talks during telephone conversations with EU foreign policy chief Catherine Ashton, US Secretary of State John Kerry, Russian Foreign Minister Sergei Lavrov and the Organization for Security and Cooperation in Europe (OSCE).

"In the many discussions I've had in the last couple of hours, I've been campaigning ... to hold a second meeting in Geneva to follow up on the first one," he told ARD television, according to a text of an interview aired Sunday (04.05.2014).

Steinmeier said Friday's violence in Ukraine's southern city of Odessa was a "tragedy" that "must be a wake-up call for all participants."

Germany's top diplomat also proposed a greater mediation role for the OSCE, including the convening of local "round table" talks in Ukraine to defuse conflicts.

Steinmeier said the purpose of a second Geneva conference would be "finally to make clear agreements on how we can put an end to this conflict and gradually move towards a political solution".

On April 17, the US, Russia, Ukraine and the EU struck a deal in Geneva that included the disarming of militants, the departure of activists from occupied public buildings and a Ukrainian national dialogue on constitutional reform.

OSCE observers were charged with overseeing the first accord's implementation. Seven monitors operating under OSCE rules were freed on Saturday.

Late on Saturday, Lavrov called his US counterpart Kerry to demand that Washington use its influence over Kyiv to stop what he called Ukraine's "war against its own people."

The Russian foreign ministry said Lavrov had also called for a greater mediating role for the OSCE and curbs on the Right Sector - a Ukrainian nationalist group active in western Ukraine.

Merkel and Putin also discussed the supply of Russian gas and its transit, based on the results of a recent meeting in Warsaw on Friday. During those recent talks, Russia threatened to cut natural gas supplies to Ukraine in June if it receives no pre-payment. The move was part an escalating row between Moscow, Ukraine and the European Union over energy supplies.

Kerry reportedly also favored a greater OSCE role, but also warned Lavrov of the "possibility or the reality of sectoral sanctions" targeting Russia amid Western claims that Moscow is steering unrest in Ukraine.

The head of the OSCE in Europe, Swiss President Didier Burkhalter, will visit Moscow on Wednesday for talks on the crisis in Ukraine, the Kremlin said.

Moscow has dismissed the Kyiv government's plans for a presidential election on May 25 as "absurd" given the country's spiral into conflict.

Separatists in eastern Ukraine plan to hold an independence referendum next Sunday.

Western powers and Russia have traded barbs at an emergency meeting of the UN Security Council, accusing each other of hypocrisy in handling the conflict in eastern Ukraine. They met as fighting intensified and spread. (02.05.2014)