Ukraine as turning point for Europe? | Europe| News and current affairs from around the continent | DW | 03.05.2014

Ukraine as turning point for Europe?

Some crises profoundly change the world order - the eurozone crisis led to a European banking union, for example. Could the crisis in Ukraine have a lasting effect on the European Union, like in energy policy? 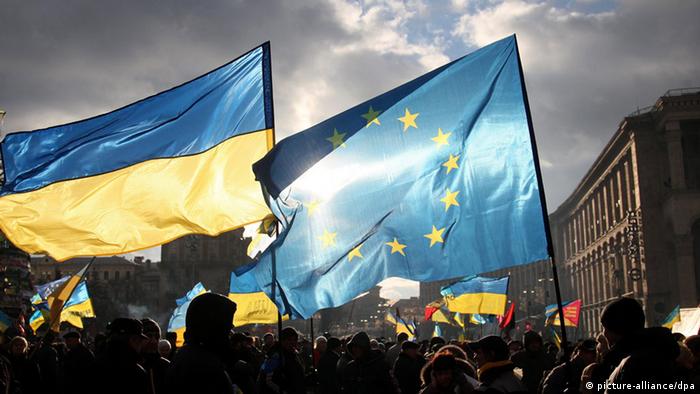 When it comes to energy policy, EU member states have not been keen to liaise with other members of the bloc. After Fukushima, when Germany decided to quickly phase out nuclear energy, Germany's neighbors weren't involved in the decision-making process - they were simply left to take note of the policy change, as the issue of energy is largely in the hands of individual member states.

But the crisis in Ukraine could see European member states move toward more energy integration. The debate kicked off after Poland's Prime Minister Donald Tusk coined the term "energy union" - and the discussion about more independence from Russian oil and gas imports has picked up pace ever since.

Tusk had also brought up the idea of common EU energy purchases from Russian energy giant Gazprom, but an energy union could even go further than that. According to Guntram Wolff, head of the Brussels-based think tank Bruegel, huge investments into European infrastructure would kill two birds with one stone: It would make sense for Europe, and also have sufficient symbolism as an end to the bloc's austerity policy. It would be a good way to revive people's interest in the European project, Wolff added.

Tusk's idea of an EU energy union has not only met with approval from experts and European parties campaigning for elections on May 25, but it's also been praised by numerous heads of state and government. EU energy commissioner Günther Oettinger wants to present a proposal by June that could include expansion of pan-European grids for natural gas, as well as a uniform price for Russian gas. 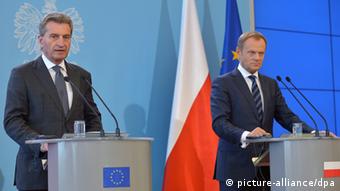 Oettinger (left) and Tusk are pushing for a joint energy union

According to Jan Techau, who heads the think tank Carnegie Europe, the crisis in Ukraine will spur integration on the energy market. "It might not lead to a uniform energy policy, but it will definitely lead to massive investments in order to become less dependent on Russia," he said.

However, he doesn't expect only Europe's energy policy to change in the long run. Europe's understanding of how far the bloc can push in terms of cooperation with its neighbors to the east could change, as well.

The crisis in Ukraine destroyed Europeans' illusions that they could form agreements with the east without experiencing counter-pressure from Russia. In the aftermath of the crisis, Europe has had to take power politics into account - much more than it had done before. "Russia has shown us that power politics, politics of strength, military threats, blackmailing - all these things - are going to be political instruments," Techau said.

A rift within Europe

There's not been much talk about the EU's Common Security and Defense Policy (CSDP) lately - but some of the larger political parties' election programs have hinted at building up a European army. Techau is rather skeptical on that point. "It's a dream that won't be possible for a long time." Quite the contrary: He argues that the CSDP is one of the losers in the Ukraine crisis. "NATO has gotten a boost, but Europe hasn't."

While people from the Baltic States, Poland and Scandinavia are worried for their safety - people are quite outspoken about their fear of Russia - others such as Germans, French and Dutch have been more relaxed. And so are Mediterranean people. At the moment, Europe has been speaking with a single voice, said Janis Emmanouilidis, director of the European Policy Centre in Brussels. However, as the conflict drags on, it will become more complicated to maintain unity, he said.

According to Techau, after the 2003 war in Iraq, the rift within Europe dividing the continent in its east and south could be felt quite clearly. It's not just about perceived threats, but also about financial interests, he said: "The EU pays two-thirds of aid under its European Neighborhood Policy to the south, one-third goes to the east. Mediterranean countries such as Spain, Italy and Greece don't want money to be pulled from the Mediterranean to be given to the east." 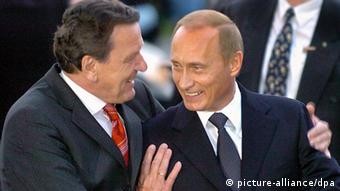 This rift does not work in Germany's favor. With its close economic and political ties to Russia, Berlin struggles with its promise to provide foreign policy leadership. "Germany is expected to lead, to bring about some calm, to reassure safety for eastern partners. But it's difficult for the Germans, who have always had a slight weakness for Russia, and who are closely watched because of that," Techau said.

But according to Germany's partners, Berlin is sending mixed signals - quite the contrary to its firm position in the euro crisis. Germany could end up losing out in the Ukraine crisis, both on the economic front as well was in terms of EU political influence.

The EU Energy Commissioner wants member states to pay a single price for Russian gas. DW's Henrik Böhme would like to see Europe move faster toward reducing its dependency on Russia fuels, regardless of the price. (02.05.2014)