UEFA has refused to light the Allianz Arena in rainbow colors in support of LGBTQ rights, a decision Munich's mayor has labeled as "shameful." One Hungarian activist group said the action would have "meant the world." 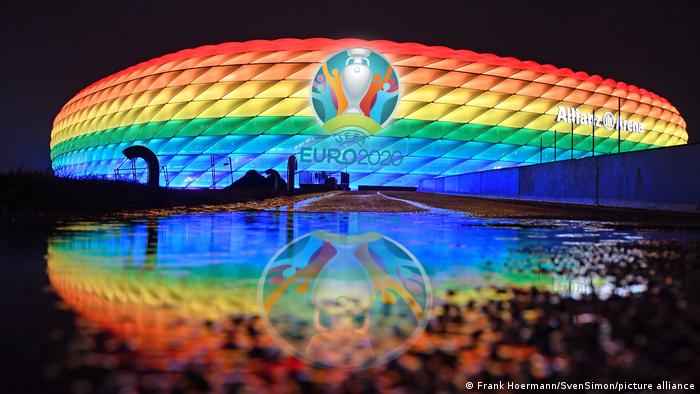 European football's governing body, UEFA, has declined a request to allow Munich's Allianz Arena to be illuminated in rainbow colors in support of LGBTQ rights, saying it would represent a political statement.

LGBTQ activists and the Munich City Council had requested the action for Germany's Euro 2020 match against Hungary on Wednesday, after legislation was passed through the Hungarian parliament banning LGBTQ content for minors.

In a statement on Tuesday, UEFA said the action would have signaled a political message and suggested alternative dates.

"UEFA, through its statutes, is a politically and religiously neutral organisation. Given the political context of this specific request – a message aiming at a decision taken by the Hungarian national parliament – UEFA must decline this request," the statement read.

"UEFA has nevertheless proposed to the city of Munich to illuminate the stadium with the rainbow colours on either 28 June – the Christopher Street Liberation Day – or between 3 and 9 July, which is Christopher Street Day week in Munich."

Several German politicians have reacted with disappointment to UEFA's decision, with the mayor of Munich slamming the idea to show the colors on another day as a "ridiculous counterproposal."

"I find it shameful that UEFA forbids us to set an example for diversity, tolerance, respect and solidarity," Dieter Reiter said in a statement.

"I am also disappointed with the DFB, which, despite the overwhelming approval from all over the country, wasn't willing to position itself to influence the outcome," Reiter said.

Dagmar Freitag, chairwoman of the Sports Committee of the German Parliament, also expressed dissatisfaction with UEFA's move, claiming that its actions don't support its words.

"The city of Munich really offered a great opportunity to fight against discrimination, to show an outstanding sign for tolerance and diversity," Freitag told DW. "UEFA really does not show ambition to stand up for equality, they just claim it" she added.

The politician added that "soccer is a sport with a real impact on our society. And they could have made this step." Asked about the idea of lighting the stadium despite UEFA's ban, Freitag highlited that several other public places in the country will be lighted up in rainbow colors: "There will be many, many signs in Germany to show what it is all about."

Munich city council is expected to vote in favor of donning the town hall in rainbow flags and illuminating the Olympic Tower.

"We will not let UEFA stop us from sending a strong signal to Hungary," Reiter added.

For Hungary's largest LGBTQ organization, the Hatter Society, lighting up the Allianz Arena in rainbow colors on Wednesday would have been a major show of support.

"As [Hungarian Prime Minister Viktor] Orban and [his ruling party] Fidesz have pumped endless money into football, attempting to revive it again as a source of national pride, having to walk into a stadium illuminated in rainbow colors would have been quite ironic," a spokesperson said, referring to over €2 billion ($2.4 billion) invested in football infrastructure in Hungary by the government since 2010.

"We have experienced immense support from international bodies, but this would have been an obvious sign of solidarity."

Family is Family launched a campaign – #nemvagyegyedül (#youarenotalone) – to support LGBTQ people after the new legislation in Hungary was passed. They were hoping for a similar showing of solidarity in Munich.

"A similar message coming from UEFA or from the players would have meant the world for many people," a spokesperson told DW.

"We are disappointed that the rights of LGBTQ people is 'too political'. Banning programs and products that even mention LGBTQ topics is not political, it's the attempt to erase our community." 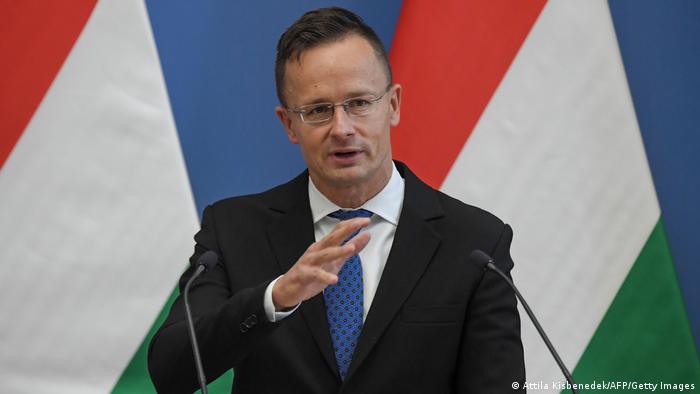 Hungarian foreign minister Peter Szijjarto had defended the new law on Monday and said that sporting events had nothing to do with national legislation.

"We have passed this law to protect Hungarian children and Western Europe is now fighting against it," he said. "I find it harmful and dangerous to confuse politics with sport. Historical experience shows that. If anyone, the Germans know this for sure."

Germany international Leon Goretzka, meanwhile, had spoken out in support of lighting the stadium, saying at a Monday press conference that it was a "great idea."

And other Bundesliga clubs have promised to fill the void, with Cologne and Eintracht Frankfurt planning to illuminate their stadiums in rainbows during the Hungary match.

“If Munich is not allowed on Wednesday, then other stadiums in the country have to show their colors,” Eintracht Frankfurt’s board spokesman Alex Hellmann tweeted.

“Deutsche Bank Park will switch on the rainbow for the game against Hungary.”

Meanwhile, Germany team captain Manuel Neuer will continue to wear a rainbow-colored captain's armband, which was subject to a UEFA investigation.

In contrast to its ruling on lighting up the Allianz Arena, that investigation concluded that the armband is a "symbol of diversity and thus a good cause" and therefore does not fall foul of UEFA's rules around "political symbols" which are forbidden and usually results in a fine for the national association. 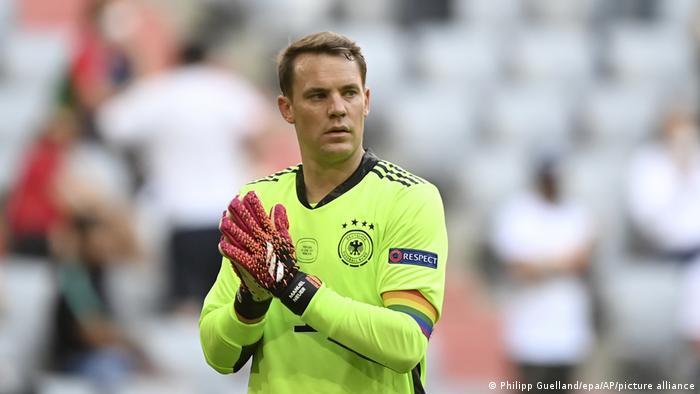 Manuel Neuer will once again wear a rainbow-colored captain's armband.

CSD Deutschland, which acts as an umbrella organization for all Christopher Street Day associations in Germany, had hoped to see a "clear position" from the DFB and UEFA.

Member of the board of directors Kai Bölle highlighted that professional football still has a problem with homophobia through "shaming, chants, insults and exclusions," and that athletes and organizations had a platform to make a difference.

"To this day, there are only openly gay professional athletes once their careers are ended," he pointed out.

"Nobody takes this risk... it suggests that it's not a safe place. Although there's support you don't know if that's really the case. That's why it's all the more important that players, national team players and associations take a stand."

The Hatter Society echoed those views.

"Unfortunately most professional sports have a lot of racism, sexism and homophobia they need to tackle," the spokesperson said.

"Campaigns like rainbow laces or taking the knee go a long way, because they spread awareness about social issues and can reach audiences activists rarely can."

In Februay this year, more than 800 male and female German footballers pledged to support any gay footballers as part of the "Ihr könnt auf uns zählen" ("You can count on us") campaign led by football magazine 11Freunde.

For CSD Deutschland, there is a long way to go when it comes to professional sports supporting LGBTQ rights. A symbol of solidarity at the Germany-Hungary match on Wednesday would have been a promising start.

Bölle had predicted that UEFA would reject the proposal.

"The DFB says its having a hard time in this situation, because it is a European Championship and because UEFA sets the framework," Bölle said before UEFA's decision.

"There probably won't be a big action [at the game]. But we hope that conditions will slowly change in professional sport."

Carl Nassib of the Las Vegas Raiders has announced that he is gay, becoming the first active NFL player to do so. The 28-year-old said he wanted to "cultivate a culture that's accepting and compassionate."