Turkey's president is showing livestreamed footage of the mass shooting in Christchurch to his supporters at campaign rallies. New Zealand's foreign minister has warned such actions could cause real damage. 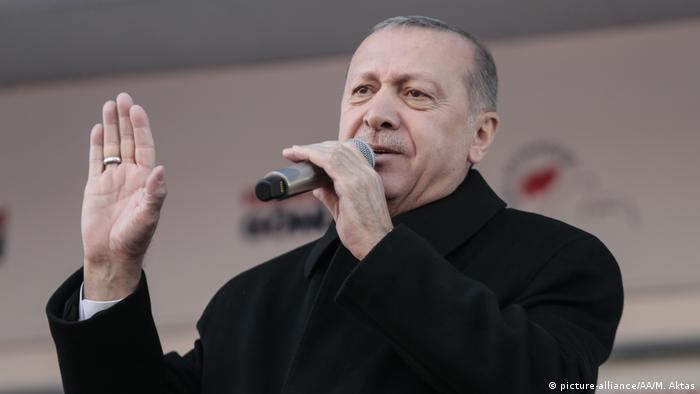 Foreign Minister Winston Peters told a press conference on Monday that the Turkish president's decision to screen footage from the Christchurch shooting could endanger New Zealanders.

Fifty people were killed in attacks on two mosques in the southern city on Friday. The alleged gunman, Australian Brenton Tarrant, broadcast the carnage live on Facebook. Social media companies have been scrambling ever since to remove the viral video from their platforms.

Now the footage has made an appearance at several political rallies in Turkey. President Recep Tayyip Erdogan used snippets from the recording at televised campaign events over the weekend in an apparent attempt to boost support ahead of upcoming polls. He also projected excerpts purported to be from the gunman's manifesto onto a giant screen and told the crowd the suspect had made threats against Turkish Muslims.

When asked about Erdogan's use of the footage, Peters said it was "totally unfair."

"Anything of that nature that misrepresents this country, given that this was a non-New Zealand citizen, imperils the future and safety of the New Zealand people and our people abroad," he said.

The minister added that he had made it clear to Turkish Foreign Minister Mevlut Cavusoglu and deputy Vice President Fuat Oktay — who are both visiting New Zealand — that the country's image should not be distorted.

"We are for a free and open society ... we did not start or bring about this disaster, and they clearly understood that," he said.

New Zealand authorities have ordered news outlets and social media users not to share the graphic content. Facebook said it had removed 1.5 million videos in the first 24 hours after the attack, but critics accused the social media giant of being too slow to act. A New Zealand teenager charged with distributing the footage appeared in court on Monday.

At his weekend campaign events, Erdogan said the 28-year-old suspect had twice visited Turkey in 2016 and had railed against Muslim Turks in a white supremacist manifesto posted online.

"All Muslims, our country, our nation and myself are targeted," he told his supporters.

While showing video footage of the attack, Erdogan took aim at the leader of Turkey's main opposition Republican People's Party (CHP), Kemal Kilicdaroglu, for warning against "terrorism rooted in the Islamic world."

He also drew links between Kilicdaroglu and right-wing Australian politician Fraser Anning, who sparked an outcry when he blamed the New Zealand attacks on Muslim immigration.

"We have lived through something in New Zealand, haven't we?" Erdogan was quoted by The New York Times as saying. "A poor imitation of a politician there said something. What did he say? He holds Islam responsible for terror."

CHP lawmaker Gursel Tekin called the use of the video "irresponsible" and accused the president of exploiting the tragedy for political gain.

Erdogan is seeking to rouse his conservative base as the country prepares for local elections on March 31. Although the Turkish leader remains popular, an economic recession and soaring inflation have taken a toll on voters.

The country remained on a high security alert following the deadly terror attack on mosques in Christchurch. Victim burials were expected to begin as PM Jacinda Ardern and her Cabinet prepared to meet and propose action. (18.03.2019)