Grief and shock, but ′still home′ in Christchurch the day after terror attacks | World | Breaking news and perspectives from around the globe | DW | 16.03.2019

Members of the Muslim community in Christchurch are expressing their grief over terror attacks targeting two mosques. Amid the fear were displays of solidarity, as Samantha Early reports.

Abbas Nazari first arrived in Christchurch as a child refugee from Afghanistan. He and his family were taken in after the international sea rescue standoff in 2001, known as the Tampa Affair.

New Zealand gave them and fellow Afghans "a home, a place, a future, hope," he said. Now it's where they have also experienced terrorism.

On Saturday, Nazari turned out to support the dozens of people at an emergency response center set up for friends and relatives of the victims of Friday's deadly terror attacks on two of the city's mosques.

Guarded by armed police, the center, along with a nearby site where people gathered to lay flowers and tributes, were busy locations in a city that was otherwise subdued.

Nazari told DW that everyone in Christchurch's small, tight-knit Afghan community knew someone who was in the hospital or had died. He said he came out to help them coordinate relief efforts.

"This is still home," he said, explaining how neighbors had come to his family's house after the shootings offering flowers, food and a place to feel safe. "There was so much darkness around, those are the tiny pinpricks of light we can look to."

Describing an "overwhelming response of kindness and love," Nazari said he still wanted to point out that such violence did not "just happen."

"There is an underbelly of hate and racism in every society and because it's not as potent here in New Zealand, we shouldn't say that it doesn't exist. Because it does," he said. "Yesterday we saw this in its most potent and most extreme form."

Nazari said his mother had racial slurs and abuse shouted at her because she wears a headscarf. His younger brothers, too, had experienced racism.

"I hope people realize that we have to call it out when we see it," Nazari said.

Sheik Ashad Ali was visiting Christchurch from Auckland and told DW he was at prayers in the mosque in Linwood with one of his three sons when the shooting started. 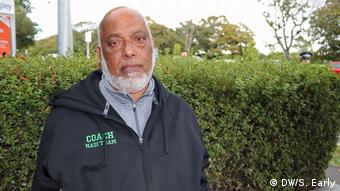 The 67-year-old football coach witnessed people being killed and couldn't find his son until several hours later. He had survived.

Ali said one of his Muslim friends in Christchurch was too afraid to leave his home or open his door after the attacks.

Despite what he has been through, Ali said he doesn't blame all New Zealanders.

"The people are very good in New Zealand. Only one or two people here who spoil the country, spoil the name," he said.

He urged the New Zealand government to take away people's privately owned guns, saying, "If [there are] no gun[s], we all shall be safe."

Ginny Sutherland, who was supporting a longtime friend whose relative was feared killed, told DW it was heartbreaking to witness bereaved families who wanted to see their loved ones but who had to wait for police and coroners to do their jobs.

It's customary in Islam to bury the dead within 24 hours. The bodies of the victims had not yet been released to families because investigations were ongoing, but Police Commissioner Mike Bush said Sunday they were "aware of the cultural and religious needs" and working as quickly as possible.

"This is going to take Christchurch a long time to get over. Getting the trust back and getting people to heal," said Sutherland.

Sutherland was among several people who compared the citywide trauma of the terror attacks to the series of earthquakes, some deadly, which struck the city starting in 2010. 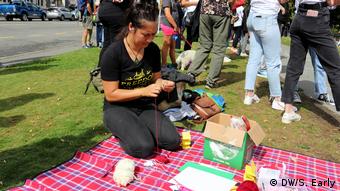 "The last one was mother nature, but this is not mother nature. This is man-made, so what can you say," said Sanjay Dutt, who brought his family to a makeshift memorial outside the city's Botanic Gardens where people were laying flowers.

Dutt, who moved to Christchurch in 2011 to help the city rebuild, described the shootings as an attack on all New Zealanders.

Catherine McFedries, who brought craft materials for her children and passers-by to create messages for the memorial, said she wanted to express shock, sadness and solidarity.

"Being Christchurch, we've been through quakes together and this is just so far from who we are," she said of the attacks, adding a message for the Muslim community. "We are just devastated with you. So many tears."

At least 49 people have been killed in two attacks targeting Muslims in the New Zealand city of Christchurch. Officials have called it a "right-wing extremist terrorist attack." DW has the latest. (15.03.2019)