Australia's government plans to censure a far-right senator who claimed Muslim immigration was to blame for the New Zealand mosque attacks. The Islamophobic comments also caught the attention of a teenager with an egg. 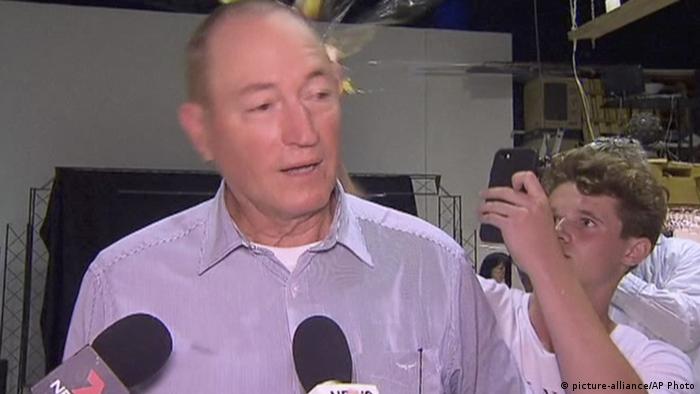 Anning, a far-right, independent politician from the state of Queensland, sparked outrage in the massacre's aftermath when he wrote on Twitter, "Does anyone still dispute the link between Muslim immigration and violence?"

The terror attacks targeting mosques in the city of Christchurch on Friday killed 50 Muslim worshippers and injured dozens of others.

Anning later released a statement denouncing the shooting, but insisted "the real cause of the bloodshed" was "the immigration program which allowed Muslim fanatics to migrate to New Zealand in the first place."

'Those views have no place in Australia'

Morrison said his conservative coalition government and the opposition Labor party had agreed to pass a bipartisan censure motion against Anning when Parliament returns in April.

"I would normally not want to give this any oxygen, but I want to absolutely and completely denounce the statements made by Senator Anning ...  in his attack on Islamic faith specifically," the prime minister said.

"These comments are appalling and they're ugly, and they have no place in Australia ... let alone the Australian Parliament," Morrison added. "He should be, frankly, ashamed of himself."

Given that Anning is an independent politician, censure is the strongest action the two major parties can take against him.

The senator's comments also appeared to rile a 17-year-old protester, who smashed a raw egg on the back of Anning's head during a Melbourne press conference on Saturday.

The incident, which was captured on camera, showed the politician spin around and punch the boy in the face before they could both be restrained. A police statement said the boy was arrested but later released without charge.

It's not the first time Anning's comments have sparked a furor. In August, he called for a "final solution" to Australian immigration. Critics accused him of making a thinly veiled reference to the Holocaust, but he claimed to be unaware of the phrase's connection to the Nazis' extermination campaign.