Senator Fraser Anning delivered a racist speech to parliament, which has drawn condemnation. The freshman senator defended his use of the term "final solution" referring to a vote on immigration. 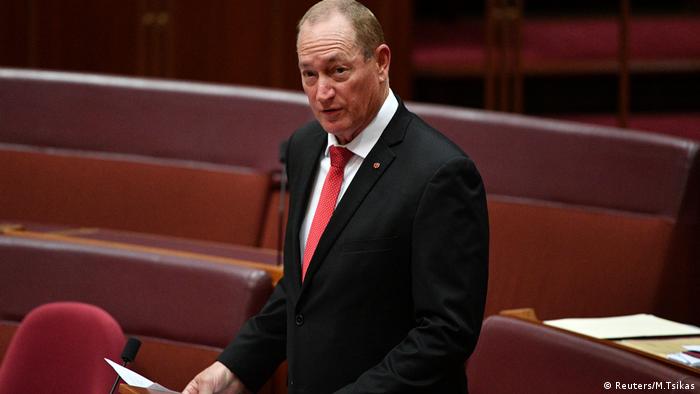 Australia's prime minister and politicians from across the political spectrum on Wednesday condemned a speech by a freshman senator calling for only white immigration and a "final solution" to end Muslim immigration.

Senator Fraser Anning used his first speech in parliament on Tuesday to call for a return to a "White Australia" immigration policy that reflects the "European Christian composition of society," echoing a policy that barred people of non-European descent from immigrating. The policy was abolished in 1973.

"I believe that the reasons for ending all further Muslim immigration are both compelling and self-evident," Anning, a member of the right-wing Katter's Australian Party (KAP), told a mostly empty hall of lawmakers.

"While all Muslims are not terrorists, certainly all terrorists these days are Muslims, so why would anyone want to bring more of them here?" he said, going on to claim Muslims were the least able to integrate, didn't work and were welfare-dependent.

He later called for a national vote on immigration, saying the "final solution to the immigration problem is of course a popular vote," not a decision by a government.

"We need a plebiscite to allow the Australian people to decide whether they want wholesale non-English-speaking immigrants from the Third World, and particularly whether they want any Muslims, or whether they want to return to the predominately European immigration policy… I for one will be happy to abide by their decision," Anning continued.

Muslims make up about 3 percent of Australia's population.

Prime Minister Malcolm Turnbull struck back at the controversial comments, arguing that Australia was one of the most successful multicultural societies in the world.

"So we reject, we condemn racism in any form, and the remarks by Senator Anning are justly condemned and rejected by us all," he said.

"You have to be pretty outrageous to be condemned by everybody in the Australian parliament, but Senator Anning has managed to do just this," he said.

"You may have your grievances on what Fraser Anning has said, don't direct them at me," she added. "It's got nothing to do with me." Anning was elected on the One Nation ticket before switching to Katter's Australian Party.

Critics immediately latched onto Anning's use of the term "final solution," a phrase used by the Nazi regime to refer to the policy of exterminating Jews during the Holocaust.

However, Anning said that he "didn't even think" that using the term would be offensive and refused to apologize.

"All I said was the final solution to the immigration problem is a vote of the Australian people," he said. "That has nothing to do with the 'Final Solution,' the thought police got onto that."

"If people want to take it out of context that's entirely up to them. It was never meant to denigrate the Jewish community and it's two words and if that offends anyone unfortunately that's the way it has to be," he said.

Anning has been a supporter of Israel and in June he told Sky News Australia that Australia should follow the United States and move its embassy from Tel Aviv to Jerusalem.

Australian Prime Minister Malcolm Turnbull has called on a senator to apologize after he was accused of "slut-shaming" a fellow parliamentarian during a heated debate over legalizing pepper spray to protect women. (03.07.2018)

Amidst the worst drought in living memory, the world's driest continent is also heating up due to climate change. Critics say too little is being done to prevent increasing temperatures and decreasing rainfall. (09.08.2018)