Amidst the worst drought in living memory, the world's driest continent is also heating up due to climate change. Critics say too little is being done to prevent increasing temperatures and decreasing rainfall. 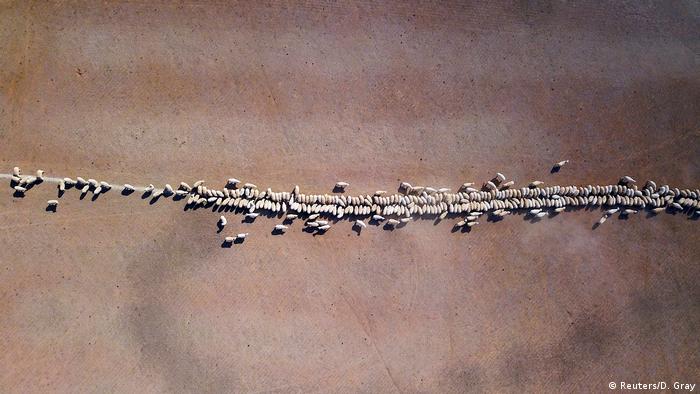 New South Wales, which is Australia's most populous state and about the size of France, was declared 100 percent in drought on Wednesday.

Despite the fact that it is winter, farmers in the state and throughout the southern region of Australia are struggling to maintain their livelihood as crops fail and livestock die.

With grazing land turned to dust, some farmers have resorted to hand-feeding to keep their stock alive. They also have permission to shoot kangaroos that compete for pasture. Depression and suicide among farmers are on the rise.

And yet, there is no end in sight to this crippling drought, unseen for generations. The predicted start of bushfire season has been brought forward two months in New South Wales to prepare for what could be an apocalyptic summer scenario.

Though Australia is the driest inhabited continent on Earth and has regularly experienced intense droughts since modern record-taking began after European colonization, the relatively fertile southern regions continue getting hotter while receiving less rain.

Autumn of 2017 in southern Australia was the driest for 116 years. And 2017 was also the hottest year ever in New South Wales.

A drought crippled New South Wales in 2006 as well

"These regions experienced increasing intensity and frequency of hot days and heat waves over the past 50 years, in turn increasing drought severity," said Lesley Hughes, a professor of biology at Sydney's Macquarie University and councillor with the Climate Council — a climate change information nonprofit created after the current government closed down the state-funded Climate Commission.

But the "source of the problem is complex," she told DW.

Scientists are confident that warming linked to human-induced climate change "has contributed to a southward shift in weather fronts from the Southern Ocean, which typically bring rain to southern Australia during winter and spring," Hughes explained of the reduced precipitation.

As rain-inducing weather fronts drift away from land to the Southern Ocean, the risk of drought has increased, especially in agricultural heartlands such as the Murray Darling Basin in New South Wales.

Benjamin Henley, a research fellow in climate and water resources at the University of Melbourne, shares this view.

"Climate model projections suggest that with anthropogenic emissions, the storm track will shift south, reducing rainfall [over land] in the south," he told DW.

But global warming could also be increasing the intensity of drought. "Higher temperatures during droughts, which influence evaporation rates, can be due to both the lack of rain itself [due to the reduced evaporative cooling], and the higher probability of warmer temperatures due to climate change," Henley explained. 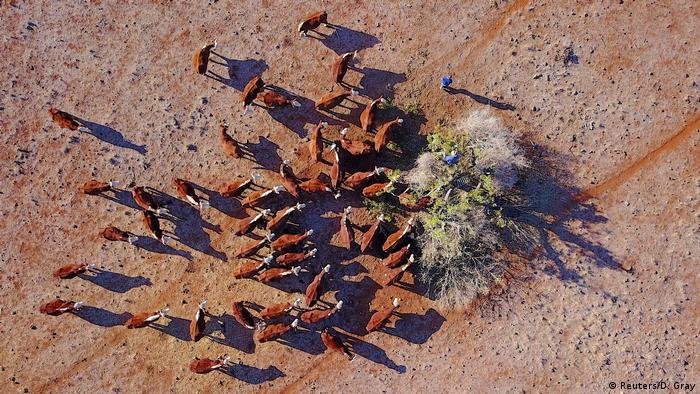 Working with colleagues at the University of Melbourne, Henley has been tracking cool and warm season rainfall patterns over 800 years in an effort to better understand whether this drought, and the so-called Millennium Drought of the 2000s that was the longest in history, are in any way unusual.

In an article published this past May in The Conversation, Henley and his co-authors concluded that "major droughts of the late 20th and early 21st centuries in southern Australia are likely without precedent over the past 400 years."

Paradoxically, while southern Australia has been overly dry, the tropical north has been "unusually wet" over recent decades.

While Henley says that "natural climate variability is likely playing a large role" in these patterns, he acknowledges the southern Australia droughts "will likely worsen with climate change ... given the drying rainfall projections."

While the Australian government has announced a comprehensive relief package for farmers, there's concern that an essential part of the problem is not being addressed: climate change.

Members of the conservative government, including former Deputy Prime Minister Barnaby Joyce, have declared that climate change mitigation will do nothing to help farmers.

But Australian Prime Minister Malcolm Turnbull is at least willing to concede that the climate is changing.

"I think everyone agrees that we're seeing rainfall that is, if you like, more erratic — droughts that are more frequent and seasons that are hotter," Turnbull told state broadcaster ABC.

Turnbull, who has owned a livestock farm in New South Wales since 1982, reiterated the collective sense that this was the worst drought in living memory.

But the government has stopped short of attributing the changing climate to human-induced global warming, and enacting policy accordingly.

Turnbull's predecessor scrapped a carbon tax scheme introduced by the center-left Labor government, and the new leader has since failed to introduce an alternative emissions trading scheme. Australia has also back-pedaled its commitment to cutting carbon emissions. 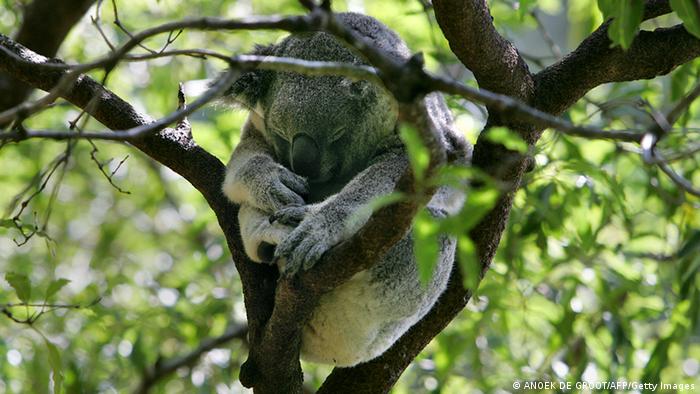 Hughes says current emission reduction targets are "not even close" to combating rising temperatures. Under the Paris agreement, Australia has committed to reducing CO2 emissions 26 to 28 percent from 2005 levels by 2030.

"This has been widely judged as inadequate," Hughes said, noting that cuts of 45 to 60 percent had been recommended before the Paris deal.

Most concerningly, Australian emissions have actually been increasing every quarter since March 2015. There are real doubts that even the current, lowered target will be met.

According to Hughes, the Commonwealth Scientific and Industrial Research Organisation (CSIRO) and the Bureau of Meteorology have projected that winter and spring rainfall could decrease by up to around 15 percent across southern Australia by 2030.

Meanwhile, rainfall could decline by 20 to 30 percent later in the century, depending on levels of greenhouse pollution. The southwest could see rainfall declines of 50 percent, which would be a nightmare scenario for the farmers who contribute a large part of Australian exports.

"The combined effect of increasing temperatures and declining rainfall mean that without deep and rapid cuts in greenhouse gas emissions, there is high confidence that the time spent in drought will increase in coming decades in southern Australia," Hughes concluded.

Another sign of the Australian government's lack of committment around climate action are plans to mine more coal, the dirtiest fossil fuel and a major source of carbon pollution on the planet.

The conservative government is backing the construction of one of the world's largest coal mines, the so-called Adani mine located inland from the Great Barrier Reef.

In addition to high greenhouse gas emissions, the mine will also be a major drain on precious water resources. "While farmers struggle with drought, Adani's coal mine is allowed take up to 9 billion liters of groundwater and 12 billion liters of surface water every year," noted a tweet under the #StopAdani campaign on Twitter.

Across Australian media, there's a perception that fossil fuel profits come before the drastic need to preserve water and mitigate climate change.

In response, political leaders are happy to recycle the idea that the climate has always changed.

"We are the land of droughts and flooding rains," said Turnbull this week. "It's a very volatile and often capricious climate, and Australian farmers are resilient."

Yet as Australian carbon emissions continue to grow instead of decline, a widely predicted increase in drought and temperatures may ultimately force many of these farmers off the land.