India′s Adani signs off on controversial Australia coal mine | Business | Economy and finance news from a German perspective | DW | 06.06.2017

India's Adani signs off on controversial Australia coal mine

The Indian mining giant has announced it will start work on its Carmichael coal mine project in north-east Australia despite concern from environmentalists that it will damage Australia's Great Barrier Reef. 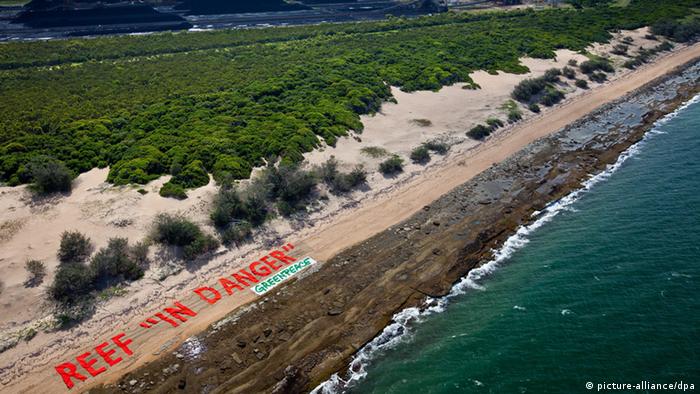 Adani chairman Gautam Adani said in Townsville, Australia, on Tuesday that the board had made its "final investment decision" which marked the "official start" of the Carmichael mine project, destined to be one of the world's largest coal mines.

The coal mine will cover an area of 447 square kilometers (172 square miles) in the Galilee Basin, including six open-cast pits and five underground mines. It is set to operate for 50 to 60 years.

The controversial project, worth $16 billion (14 billion euros), is the biggest investment in Australia ever by an Indian company. It encountered numerous regulatory and legal hurdles, leading to seven years of delays, with a lease finally granted last year.

The Carmichael mine has been slammed by environmentalists who say it will hurt Australia's Great Barrier Reef - a World Heritage-listed biodiversity site stretching along Australia's northeastern coast, which is already threatened by climate change.

This is because the development proposes exporting coal to India from a massive open-cut and underground coal mine 160 kilometers (100 miles) northwest of Clermont in central Queensland, home to the reef, via a 189-kilometre rail link to port.

Environmentalists said Tuesday Adani had yet to reveal how it would fund the mine, with numerous banks ruling out finance for the project. Greenpeace Australia called it "toxic" and a "disaster for the climate", while WWF-Australia chief Dermot O'Gorman warned of a risk to the reef.

"Carbon pollution from burning coal is the single largest cause of global warming," he said.

They cited public opposition, risks to miners' health, the potential impact on the reef, and India's reputation as reasons not to proceed. "The Australian and Queensland governments should be investing in actions that protect the reef, not a new mine doomed to fail, that will hasten the reef's destruction."

The reef - already under threat from farming run-off and the crown-of-thorns starfish - is in the grip of a second successive mass bleaching event this year, which has been blamed on global warming.

However, Adani hit out at activists who had challenged the project for years, accusing them of exploiting legal loopholes to stall development.

Australia's Resources Minister Matt Canavan also brushed off activist concerns, saying they should remember the "quarter billion Indians who don't have electricity at all".

"It is about providing a benefit to those people to have electricity and bring them from the suffering of poverty and disadvantage," he said. "That does a lot more for the world, our globe, our environment, than anyone tweeting in air-conditioned rooms in Sydney who might be opposed to it."

The conglomerate forecasts it will produce 60 million tones of thermal coal a year for export. It also estimates it will generate 10,000 direct and indirect jobs, with pre-construction works starting in the September quarter of 2017.