In some parts of Australia's much-loved reef, 70 percent of the coral has been killed by bleaching. Australia is pledging vast amounts of money to mitigate the loss and stop a UNESCO downgrade of its status. Up to 70 percent of the coral has been killed in some parts of the 2,300-kilometer reef system, due to rising sea temperatures during March and April.

The area hit hardest was north of tourist hotspot Port Douglas, where an estimated 70 percent of shallow water corals died.

Across the whole reef, 29 percent of shallow water corals died from bleaching in 2016. Initial estimates had put the figure at 22 percent. Deeper water corals were affected but scientists were unable to systematically assess them. Southern parts of the reef escaped the worst.

Coral bleaching and the effects of Cyclone Debbie will likely cause further loss in 2017, the report said.

"Ongoing bleaching, tropical cyclone Debbie, crown-of-thorns starfish and coral disease are all having impacts," a government statement said. "The long-term trend of coral decline is expected to continue and accelerate."

Terry Hughes, head of the Australian Research Council's Centre of Excellence for Coral Reef Studies, said on Twitter that about 19 percent of the reef had been bleached so far in 2017.

"Australians will be shocked that the nation's top reef scientist says about 50 percent of all the Great Barrier Reef's coral has been killed by bleaching in just two years," WWF-Australia Head of Oceans Richard Leck said in a statement. "The Reef is a global treasure and on our watch global warming has cooked half the coral."

Bleaching occurs when abnormal conditions such as warmer sea temperatures cause corals to expel tiny photosynthetic algae, draining them of their color. Corals can recover if the water temperature drops and the algae are able to recolonize them, but repetitive bleaching events can make recovery difficult. 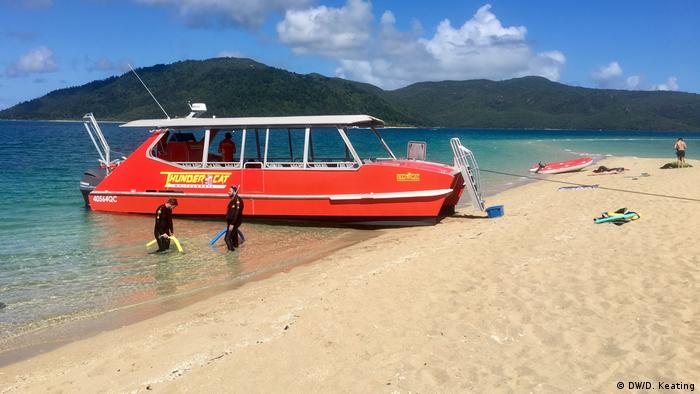 In April the Australian Council released a report that found bleaching could cost the region 1 million visitors a year and AU$1 billion (665 million euros or US$745 million) in tourism revenue.

"Over the next two to three decades, bleaching events are likely to become even more frequent and severe in Australia, with catastrophic impacts on reef health and the economy," the report said.

"Extremely warm water [is] causing particularly severe bleaching now in the middle sections of the reef, which of course is where most of the tourists visit," ecologist Lesley Hughes said. "This will have enormous economic and employment consequences for Queensland."

The UNESCO World Heritage organization will decide in July whether to list the reef as "in danger," prompting political concern in Australia. In a bid to appease the council, Prime Minister Malcolm Turnbull pledged a AU$1 billion fund to address water quality and ecosystem health.

This month Foreign Minister Julie Bishop took 75 foreign ambassadors on a snorkeling trip to show off its preservation efforts and to fight back against claims the reef was dead.

China's Ambassador Cheng Jingye told local daily "Cairns Post" that he planned to relay to China's leaders how the Reef was "well-preserved."

Last week the GBRMPA hosted a summit with more than 70 of the world's leading marine experts to discuss possible responses, such as developing coral nurseries, strategies to boost culling of crown-of-thorns starfish, expanding monitoring systems and identifying priority sites for coral restoration.

Chairman Russel Reichelt said the need to slash greenhouse gas emissions was key to the talks.

Many countries around the world agreed in Paris in 2015 to limit average warming to 2 degrees Celsius (3.6 degrees Fahrenheit) over pre-industrial levels, mainly by trying to curb fossil fuel usage.