India′s Adani looks to push ahead with coal mine near the Great Barrier Reef | Asia | An in-depth look at news from across the continent | DW | 29.03.2017

The controversial coal mine project in Australia's Queensland state is looking more likely to become a reality later this year. But it remains plagued by legal hurdles, environmental issues and fierce public opposition. 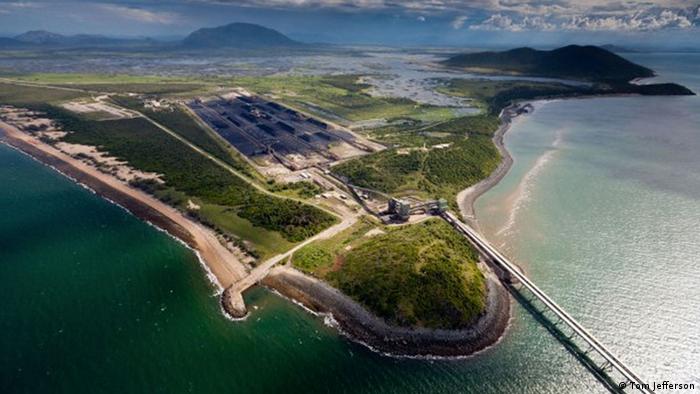 Ever since its proposal, the project has been mired in near-continuous controversy, including being blocked by the federal government in 2015.

Adani's final investment decision on the mine is expected as early as next month, as the company seeks a subsidized loan from the Northern Australia Infrastructure Facility in order to build a railway line between the newly constructed mine in the Galilee Basin and the port at Abbot Point in Far North Queensland.

If the matter is resolved, the $22 billion (20 billion euros) project would become Australia's largest coal mine, with up to five underground mines producing 2.3 billion tons of coal over an estimated lifespan of 60 years. It would also eventually facilitate the development of more coal mines in the resource-rich Galilee Basin.

Since the coal mine was proposed six years ago, Adani has faced at least 10 major legal appeals and judicial processes aimed at stopping the project from going ahead. Many of these have focused on the potential environmental consequences.

The Director of the Center for Energy and Natural Resources Law at Deakin University, Professor Samantha Hepburn, told DW the coal mine poses a serious environmental risk. 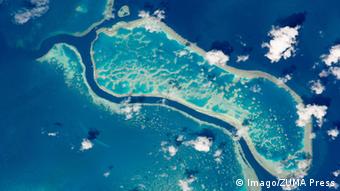 The Great Barrier Reef photographed from aboard the International Space Station

"The Adani mine has been predicted to generate 128 million tons of carbon dioxide every year," she says. "This is equivalent to a quarter of Australia's total current emissions from fuel combustion. It does not matter that the coal will be burned overseas - climate warming from greenhouse gas emissions is a global phenomenon."

"The distance between the mine and the reef is not great. There is likely to be an impact on endangered species as well as groundwater depletion even if the advice from the independent scientific committee is implemented.

"In ignoring the impact of greenhouse gas emissions from burning the coal, Australia is disengaging with its global climate change objectives and endangering an area of national environmental significance even further - with potentially catastrophic consequences given the existing levels of coral bleaching."

Despite these concerns, the Queensland state government has upgraded the project to "critical infrastructure" status, making its development a top priority and allowing environmental and other approvals such as water licenses and road access to be fast-tracked.

As Australia's executive pushes for reform of environmental laws, momentum is growing against development of coal energy in the country. But the matter is still far from settled. (11.09.2015)

Canberra has given its approval to the building one of the world's largest coal shipping terminals near the Great Barrier Reef. Environmental groups have condemned the plan for both local and global reasons. (22.12.2015)

Such a move is rare and is typically reserved for investments which will somehow benefit public education, health or national security. From an economic perspective, Adani has estimated that the coal mine will generate at least $16.5 billion for the Australian economy.

However, its financial viability has been called into question by a number of analysts, including financial firm Morgan Stanley, which in 2013 valued the mine at $0 based on a dramatic price drop in Australian thermal coal. But prices have recovered since then and currently hover around $86 (79 euros) per metric ton.

"The Queensland government's continued support for the project is most likely to be because state governments are eager for new sources of revenue and rural employment."

Hepburn says the financial benefits of the mine remain speculative as it ignores so-called "climate change economics."

Adani has signaled that it hopes to become a world leader in renewable energy. This week it became the first Indian company to join the Global Energy Interconnection Development and Cooperation Organization (GEIDCO). The group aims to promote worldwide energy sustainability as well as climate change initiatives.

However, the company continues to pursue multiple coal operations and investments across Australia and Indonesia, as well as India. The vast majority of the coal from the Carmichael mine will be shipped to India, where it will supply power plants with enough material to provide up to 100 million people with electricity. 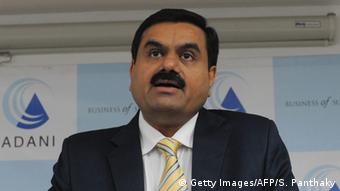 Hepburn says this ultimately comes down to politics and India's increasing energy requirements.

"Transitioning to renewable energy is expensive and takes strong political willpower," she underlined. "Energy production via coal is still the most viable option for countries with weaker economic frameworks and an increasing population with growing energy demand. Australia and Indonesia are amenable to these economic incentives because of their vast coal reserves."

The apparent imminent construction of the Carmichael coal mine has not dampened the resolve of those who remain fiercely opposed to the project.

In a recently issued open letter to Adani's founder and CEO, Gautam Adani, 76 prominent Australians - including high-profile cricket veterans Greg and Ian Chappell - urged the billionaire to abandon the project, citing climate change and strong public opposition.  The letter also warned of the potential impact the coal mine may have on bilateral relations.

Adani was quick to brand the signatories as "a very small group of misled people," however Hepburn believes people power can still have a significant impact.

"Australia is a public resource country," she says. "The coal belongs to the state - but the rights of the state must cohere with the interests of the public. The community is very powerful and there is a large collective awareness in Australia that this type of mining has a limited future."