There are a host of problems and issues for Germany and Turkey to discuss. Some in Germany have criticized giving the authoritarian Turkish leader military honors and a banquet. 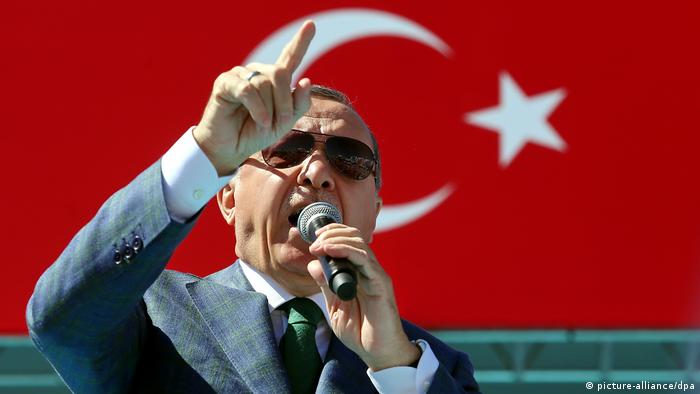 The Turkish president will meet with German President Frank-Walter Steinmeier, with military honors and an official state banquet on the agenda. It was unclear if Erdogan would meet with Chancellor Angela Merkel or other officials.

The two NATO members have witnessed relations plummet in recent years amid German concerns over the deterioration of human rights in Turkey and the country's authoritarian trajectory. However, Turkey remains an important strategic, military and economic partner for Germany and the European Union.

It will be Erdogan's first state visit to Germany since he became president in 2014 and moved to cement his control over Turkey through a controversial referendum last year granting him sweeping powers. It also comes months after Erdogan's enhanced powers and the dismantling of the parliamentary system went into effect following June elections.

German daily Bild first reported in late July that there were plans for Erdogan's first official visit in four years. The trip is not without controversy, with many German politicians criticizing the idea of rolling out the red carpet for the authoritarian Turkish leader.

Turkish-German relations soured after the German parliament passed a resolution in early 2016 recognizing the Armenian genocide by the Ottoman Empire.

Ties then nosedived in the wake of the July 2016 failed coup attempt against Erdogan. The arrest of tens of thousands of people in a post-coup crackdown and deterioration in the rule of law have caused concern in European capitals

German nationals have been caught up in the arrests, including Die Welt correspondent Deniz Yücel and human rights activist Peter Steudtner.

Escalating tensions between the two countries were somewhat eased after the release from prison of Steudtner in October last year followed by that of Yücel in February.

Turkey accuses Germany of harboring followers of the Gulen movement, which Ankara blames for the coup attempt. Ankara also accuses Berlin of allowing the outlawed Kurdistan Workers' Party (PKK) to operate in Germany.

The planned visit would also come at a critical time in the civil war in Syria as the Assad regime regains control over large swaths of territory.

Turkey has carved out zones of influence in the north of Syria and taken in more than 3.5 million refugees.

That makes Turkey a key to the European Union's efforts to prevent uncontrolled migration from reaching the bloc.

Separately, the visit would come at a time when Turkey's economy is under severe pressure, with double-digit inflation, record high bond yields, a widening current account deficit and a nearly 30 percent loss of value of the lira against the dollar since the start of the year.

Germany and Turkey are major trade and investment partners. Erdogan will therefore be looking for signs of an improved relationship with Germany to give a boost to fading international confidence in the beleaguered Turkish economy.

There are some 3 million German-Turks in Germany. It is unclear if Erdogan will hold an event to address his supporters, a move that would be criticized in Germany.

Andrew Brunson case: US takes narrow view in dispute with Turkey over pastor

There are a plethora of issues straining US-Turkish ties. So it is odd that the fate of one US pastor has sent relations between the two NATO allies into a tailspin. (05.08.2018)

President Erdogan announced the meeting without confirmation from his counterparts in the other three countries. Russia and Turkey have backed opposing sides in the conflict. (29.07.2018)