Andrew Brunson case: US takes narrow view in dispute with Turkey over pastor

There are a plethora of issues straining US-Turkish ties. So it is odd that the fate of one US pastor has sent relations between the two NATO allies into a tailspin. 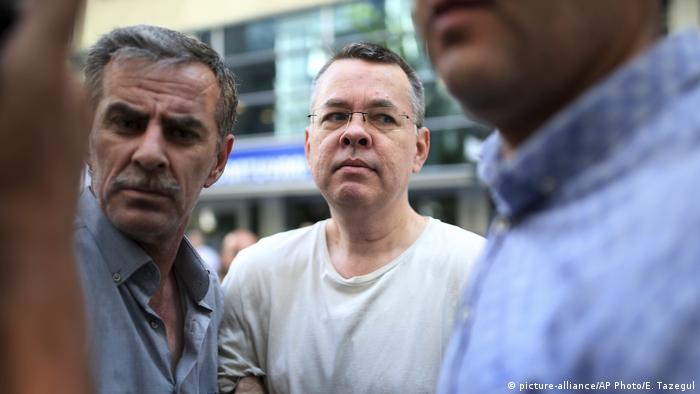 The US decision on August 1 to impose sanctions on the Turkish justice and interior ministers over the continued detention of US pastor Andrew Brunson may have been largely symbolic. Neither Turkish Interior Minister Suleyman Soylu nor Justice Minister Abdulhamit Gul are likely to feel the pain of narrowly targeted sanctions.

The immediate effect of the sanctions was to spook markets, sending the already beleaguered Turkish lira to record lows against the dollar. While there is no telling where this latest crisis in US-Turkish relations will end, there is a clear risk of a cycle of escalation, including further US sanctions.

However, the whole affair has revealed a willingness on the part of the United States to engage in hostage diplomacy with Turkish President Recep Tayyip Erdogan's authoritarian government. It also seems to demonstrate the Trump administration's focus on a single evangelical Christian over broader human rights issues in Turkey and a host of other strategic questions.

"It appears that Trump was actually willing to offer Erdogan some real concessions in exchange for Brunson's release, if their deal had gone through," said Merve Tahiroglu, a Turkish research analyst at the Foundation for Defense of Democracies, a DC-based think tank.

"The Trump administration should have never entered into such negotiations with Turkish officials. The fact that it did shows just how transactional the bilateral relationship has become," she said.

A bombshell report this week in Bloomberg, citing Turkish and American officials, outlined how the two sides were close to a deal for Brunson to be released before Ankara made additional last minute demands.

The deal would have allowed Hakan Atilla, a former top executive at Turkish state-owned bank Halkbank, to return to Turkey to complete his prison sentence. Atilla was convicted in the US on charges of Iran sanctions-busting.

The US Treasury is widely expected to level a multibillion-dollar fine against Halkbank for its role in the sanctions-busting scheme, a move that could send Turkey's fragile economy off a cliff. Under the reportedly failed deal, the US would have lessened or even dropped any fine on the state-linked bank. 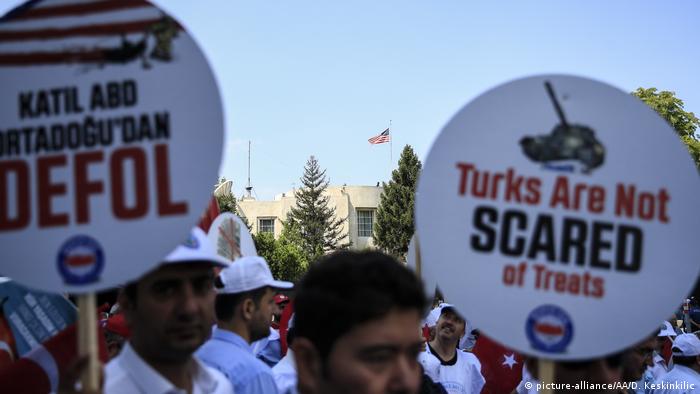 In another concession, the Trump administration had secured the release from Israel of Turkish national Ebru Ozkan, who was arrested there on suspicion of aiding Hamas. Ozkan is now in Turkey.

Brunson was set to be released and deported at his hearing on July 18. Instead, he was moved from prison to house arrest, a move that infuriated the Trump administration.

The deal reportedly broke down when Turkey added the demand that the United States drop any additional investigations into Halkbank. During Atilla's trial in New York, damning details about corruption within the Turkish government were revealed.

"If this deal had actually gone through, it would have removed a major challenge to Turkey's economic prospects and may have even cleared Halkbank's name in the eyes of international financial institutions," said Tahiroglu.

"The argument that this deal fell through because of further demands by Ankara that the US drop all investigations into Turkish sanctions-evasion schemes is truly mind-blowing. Erdogan could have walked away from all of this as a winner. Instead, he's earned Trump's wrath."

The Trump administration has repeatedly accused Turkey of holding Brunson as a "hostage." The evangelical pastor from North Carolina has been in detention for nearly two years.

He faces charges of terrorism and espionage, which were leveled against him in the wake of a crackdown following the failed July 2016 coup attempt.  Ankara blames the coup bid on US-based cleric Fethullah Gulen. Tens of thousands of people in Turkey have been imprisoned since the coup attempt.

In contrast to Brunson's case, the Trump administration has not shown the same level of interest in the case of two dual Turkish-American nationals and three foreign national US consulate employees facing similar trumped-up, terrorism-related charges in Turkey. Nor has it taken action over massive human rights abuses and the deterioration of the rule of law in Turkey.

NASA scientist Serkan Golge has been imprisoned for seven and a half years and professor Ismail Kul is banned from leaving Turkey pending trial. Two of the three US consulate employees are in prison, while the third is under house arrest.

The US Treasury statement announcing the sanctions on the Turkish ministers specifically mentioned Brunson and vague "serious human rights abuses" in Turkey.

Meanwhile, Trump and Vice President Mike Pence, a devout evangelical, both took to Twitter to praise Brunson as a great Christian and "innocent man of faith."

Erdogan has gone so far as to say Turkey would not bow down to US threats and blamed Washington for displaying an "evangelical, Zionist mentality," in apparent reference to evangelical Christians' support for Israel.

The implication of the Trump administration's rhetoric is that US pressure on Turkey could be dropped if Brunson were released. That makes the myopic focus on Brunson, whose cause has been picked up by Trump's evangelical base, problematic.

"Brunson's detention is egregious, and the United States should be making every effort to secure the release of American citizens unjustly imprisoned overseas. That said, by justifying human rights-related sanctions only on the grounds of the Turkish government's treatment of Brunson, rather than on that government's abysmal human rights record writ large, the administration has clearly placed a disproportionate emphasis on a single individual," said Rob Berschinski, the Senior Vice President for Policy at Human Rights First.

"It's hard not to infer that the administration is using the Brunson case to pander to its supporters, given Brunson's profession as an evangelical Christian pastor, and the extent to which the administration has been much less aggressive concerning other Americans detained in Turkey," added Berschinski, a former Deputy Assistant Secretary of State for Democracy and Human Rights.

Indeed, NASA scientist Golge's wife, Kubra, told NBC News that she feels the Trump administration is "only trying to save Brunson but not us." Kubra Golge has been banned from leaving Turkey with their two sons, aged 2 and 7.

Tahiroglu, from the Foundation for Defense of Democracies, said it was a "big mistake" to only focus on Brunson's situation. "It communicates — including to Turkish people — that the administration shows favoritism towards Christians or Evangelicals, which distracts from the real issue and diminishes the legitimacy of Washington's resentment," she said.

"The issue here is not just of religious freedom, but of US national security and lack of rule of law in Turkey," she added.

More trouble on the horizon

In addition to Brunson's imprisonment, US-Turkish relations have nosedived over American support for Syrian Kurdish forces, and Turkey's demand that Washington extradite Gulen for his alleged role in the coup.

Ankara's plans to buy Russia's S-400 missile defense system are also adding pressure on bilateral ties. US Congress has ratcheted up pressure on Turkey over the S-400 deal, threatening to cut its NATO ally out of the F-35 fighter jet program.

There is also an impeding showdown over US sanctions on Iran, a major oil and gas supplier to Turkey.

Turkey's lira has fallen to a record low as US sanctions and the effects of an overly politicized monetary policy kick in. President Erdogan's virtual economics may be about to hit a wall of hard truths. (03.08.2018)

US Congress and President Trump are outraged over pastor Andrew Brunson's detention in Turkey. US President Donald Trump urged Recep Tayyip Erdogan to "do something" for the clergyman's release on Twitter. (18.07.2018)