US Congress and President Trump are outraged over pastor Andrew Brunson's detention in Turkey. US President Donald Trump urged Recep Tayyip Erdogan to "do something" for the clergyman's release on Twitter. 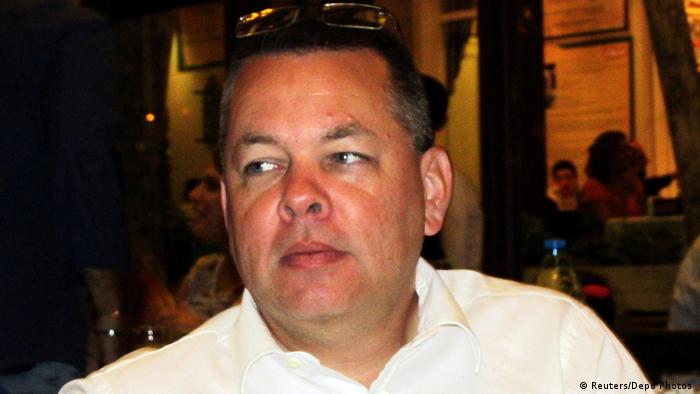 After a Turkish court denied release to US pastor Andrew Brunson, US President Donald Trump described the pastor's detention as a "total disgrace." The US president also directly urged Turkey's President Recep Tayyip Erdogan to intervene in his Twitter post on Thursday.

On Wednesday, a judge in Izmir said the clergyman would be held in jail until facing charges of terrorism and espionage.

The case of the American evangelical Christian pastor from North Carolina has added further strain to US-Turkish relations, with some members of US Congress calling for sanctions against Turkey.

Critics of Turkey have described Brunson as a "hostage."

The 50-year-old Brunson has spent nearly two years in prison, accused of links to Islamic cleric Fethullah Gulen, who lives in the United States, and who Ankara accuses of being behind the failed coup attempt of July 2016.

Last year, Turkish President Recep Tayyip Erdogan suggested Brunson's release may be tied to the extradition of Gulen from the United States.

Brunson is also accused of ties to the Kurdistan Workers' Party (PKK), which is considered a terrorist organization by Turkey, the United States and the EU.

In the court's third hearing, it was decided to keep the pastor in prison until the next hearing on October 12.

Brunson, who has lived nearly two decades in Turkey and served at a small church in Izmir, denies the charges. He faces up to 35 years in prison if convicted.

Speaking outside the courtroom on Wednesday, US charge d'affaires Philip Kosnett told reporters: "I don't believe that there is any indication that Pastor Brunson is guilty of any sort of criminal or terrorist activity."

The court decision sent the already troubled Turkish lira tumbling over fears of heightened tensions between Washington and Ankara.

The pastor's detention has become a major issue for President Trump's key evangelical constituency in the United States.

Trump, whose political base includes conservative Christians, tweeted in April that Brunson was "on trial and being persecuted in Turkey for no reason."

US Senators Lindsey Graham and Jeanne Shaheen were in Turkey in June and met with Brunson. They also held talks with Erdogan to press for the pastor's release.

US Congress has ratcheted up pressure on Turkey over Brunson's imprisonment and the S-400 deal, threatening to cut NATO ally Turkey out of the international Lockheed Martin F-35 Lightning II procurement program.

cw/jm (AFP, AP, dpa, Reuters)Each evening at 1830 UTC, DW's editors send out a selection of the day's hard news and quality feature journalism. You can sign up to receive it directly here.

New constitutional powers have consolidated the authority of the prime minister and president into one office. Erdogan has defended his new powers, but critics say the country is lurching towards authoritarian rule. (15.07.2018)

Recep Tayyip Erdogan's swearing-in as Turkey's new all-powerful president is the culmination of a long quest. But Turkey remains divided, and Germany must not abandon the Turkish opposition, says DW's Gunnar Köhne. (09.07.2018)