A Turkish-Iranian billionaire witness in the trial had implicated Turkey's president and former ministers in the Iran sanctions-busting scheme. The US judge said the Turkish banker was a small part of the plot. 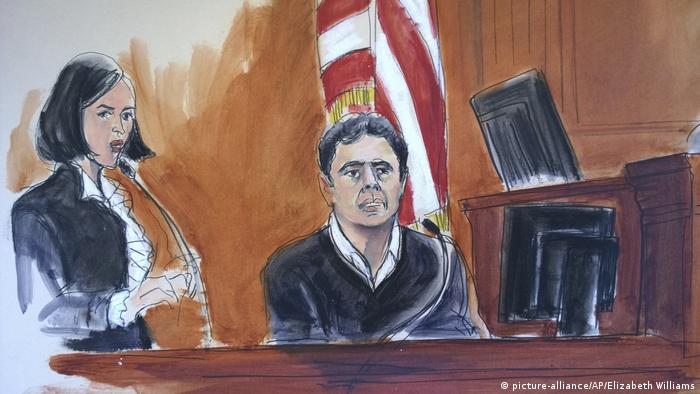 A Turkish banker convicted of violating US sanctions on Iran was sentenced to 32 months in prison by a New York judge on Wednesday, in a case that has strained ties between Washington and Ankara.

Mehmet Hakan Atilla, a former deputy chief executive of Turkish state bank Halkbank, was convicted in a US court in January for his role in an Iran oil-for-gold sanctions-busting scheme.

Prosecutors said the scheme that ran from around 2012 to 2016 enabled hundreds of millions of dollars of Iranian oil proceeds to move through Halkbank and the international banking system in violation of US sanctions.

At the center of the case was Turkish-Iranian billionaire businessman Reza Zarrab, who was arrested while on vacation with his family in the US in 2016. He pleaded guilty to seven charges as part of a deal that turned him into the prosecution's star witness against Atilla. He is yet to be sentenced.

He also testified that President Recep Tayyip Erdogan, who was then prime minister, knew about the sanctions-busting scheme, as did the then-treasury minister Ali Babacan.

Seven other defendants are accused of being involved in sanctions busting, including Caglayan and ex-General Manager of Halkbank Suleyman Aslan. All remain at large in Turkey.

US District Judge Richard Berman in Manhattan said before imposing the sentence on Atilla that he was a minor figure in the scheme and "at times a reluctant one at that," largely following orders from his supervisor. Prosecutors had asked for 20 years.

US trail raises questions in Turkey

Erdogan has repeatedly called the trial a political attack led by the United States and the movement of US-based Islamic preacher Fethullah Gulen, who Ankara blames for the failed July 2016 coup attempt.

On Tuesday, Erdogan said in an interview with Bloomberg that Atilla is "definitely innocent."

"If Hakan Atilla is going to be declared a criminal, that would be almost equivalent to declaring the Turkish Republic a criminal," Erdogan said.

Zarrab was at the center of a December 2013 corruption scandal in Turkey that almost brought down Erdogan's government.

Prosecutors in Turkey alleged he bribed high-level officials to facilitate the illicit transactions with Iran.

Three ministers implicated the corruption probe, including Caglayan, were ultimately forced to resign even though they claimed their innocence. 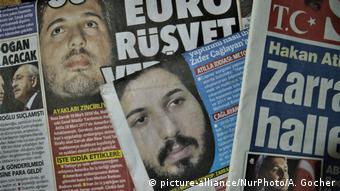 Zarrab's testimony was closely watched in Turkey for the damning information revealed against the government.

Among the evidence that Turkish prosecutors brought forward were shoeboxes of cash and luxury goods found with ministers, bankers and their relatives.

An alleged wiretapped telephone conversation was later leaked, in which Erdogan tells his son Bilal to conceal millions of dollars in illicit money.

The Turkish government said the tapes were fake and part of a plot led by Gulenist prosecutors who infiltrated the police and judiciary.

The charges against Zarrab and the ministers were ultimately dropped after Erdogan's government called the corruption allegations a coup. Prosecutors and police working on the case were sacked.

The 2013 corruption scandal was the opening salvo in a power struggle between Erdogan's government and the Gulen movement.

Read more: Real and imagined threats: the shared past of AKP and the Gülen movement

A key witness in a trial over the dodging of US sanctions against Iran has said he was attacked by a fellow inmate. Turkish-Iranian gold trader Reza Zarrab said he feared for his safety and that of his family. (08.12.2017)