A key witness in a trial over the dodging of US sanctions against Iran has said he was attacked by a fellow inmate. Turkish-Iranian gold trader Reza Zarrab said he feared for his safety and that of his family. 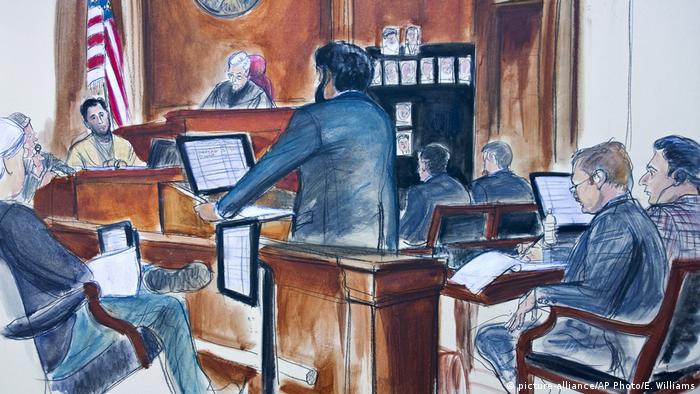 Reza Zarrab, who is US prosecutors' star witness, said he was attacked by a knife-wielding inmate who was told to kill him for cooperating with US authorities.

The trader, who finished seven days of testimony in the trial of a Turkish banker, described the attack while in court.

"I came face-to-face with an individual who tried to take my life," Zarrab said, in a dramatic ending to proceedings at the Manhattan federal court on Thursday. Zarrab said the inmate confronted him with a knife and said "he had received instructions to kill me because I was cooperating."

The trial against Turkish banker Mehmet Hakan Atilla has put a strain on US relations with Turkey, where President Recep Tayyip Erdogan called it a US conspiracy to "blackmail" and "blemish" his country. Earlier this month, Turkey seized assets belonging to Zarrab.

Zarrab pleaded guilty to charges that he schemed to help Iran evade US sanctions in October. He claims that Atilla took part in the scheme with him, but the banker says all of his institution's transactions complied with international law.

Zarrab said he paid Turkey's former Economy Minister Zafer Caglayan between €45 million and €50 million (more than $50 million) in bribes in 2012 and 2013 in order to secure his help in evading US sanctions on Iran.

US prosecutors have charged nine people with involvement in the case, although so far only Zarrab and Atilla have been arrested.

After the attack, Zarrab was removed from prison and placed in state custody. On the same day as his testimony, Zarrab was sued by a former cellmate for unspecified damages, claiming that Zarrab raped him.

Erdogan's 'Goldfinger' on trial in US

Iranian-Turkish businessman Reza Zarrab is on trial in New York, accused of violating sanctions against Iran. He has President Erdogan's support. Erdogan's family is said to have profited from Zarrab's business deals. (30.09.2016)