There are an endless number of problems and issues for German and Turkish leaders to discuss. Yet some in Germany may criticize rolling out the red carpet for the authoritarian Turkish leader. 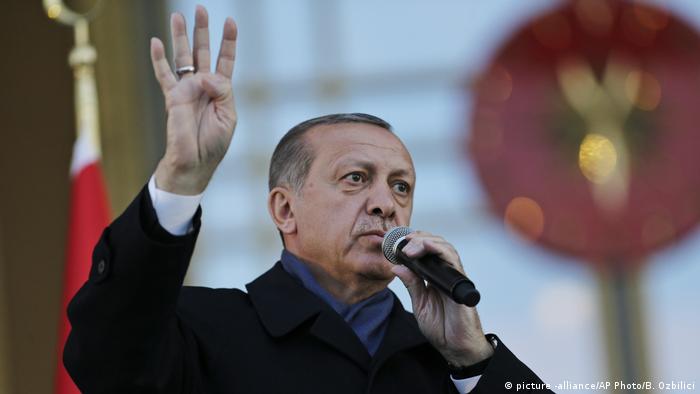 It would be Erdogan's first state visit to Germany after he became president in 2014 and moved to cement his control over Turkey through a controversial referendum last year granting him sweeping powers.

The planned visit, which Bild reported based on Turkish and German official sources, would include a military honor guard and state banquet. Neither government has confirmed the report.

The red carpet treatment would come months after Erdogan's enhanced powers and the dismantling of the parliamentary system went into effect following June elections.

In the wake of the coup bid, the Turkish government has carried out a crackdown against real and imagined enemies, drawing concerns in Europe over the deterioration of human rights and the rule of law.

Read more:  Who is Deniz Yücel — and why is the German-Turkish journalist still on trial?

German nationals have been caught up in the arrests, including Die Welt correspondent Deniz Yücel and human rights activist Peter Steudtner.

Escalating tensions between the two countries were somewhat eased after the release from prison of Steudtner in October last year followed by that of Yücel in February.

Turkey accuses Germany of harboring followers of the Gulen movement, which Ankara blames for the coup attempt. Ankara also accuses Berlin of allowing the outlawed Kurdistan Workers' Party (PKK) to operate in Germany.

The Gülen Movement Appears in Germany

However, the planned visit would also come at a critical time in the civil war in Syria as the Assad regime regains control over large swaths of territory.

The regime's offensives could next pit it against Turkey, which has carved out zones of influence in the north of Syria and taken in more than 3.5 million refugees.

Turkey is key to the European Union's efforts to prevent uncontrolled migration from reaching the bloc.

Separately, the visit would come at a time when Turkey's economy is under severe pressure, with double-digit inflation, a widening current account deficit and a 20 percent loss of value of the lira since the start of the year.

Germany and Turkey are major trade and investment partners. Erdogan will therefore be looking for signs of an improved relationship with Germany to give a boost to fading international confidence in the beleaguered Turkish economy.