The prospect of Turkish President Recep Tayyip Erdogan being received with military honors in Berlin has some German politicians up in arms. Others view the possible visit as an opportunity to hold Erdogan to account. 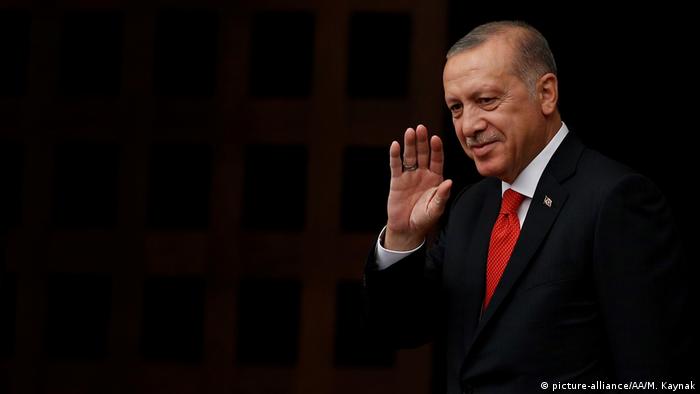 While details remain sparse on a possible state visit by Turkish President Recep Tayyip Erdogan,  the grand reception that the Turkish leader could receive has upset several German opposition politicians.

A spokeswoman with German President Frank-Walter Steinmeier's office confirmed to DW that an invitation had been extended to the Turkish president some time ago, but said that both Ankara and Berlin were still working on fixing a date.

"Planning for the visit is currently in the beginning stages," deputy presidential spokeswoman Esther Uleer said.

Not only the date, but the classification of Erdogan's visit remain up in the air. The trip could take the form of anything from a toned-down working visit to a pomp-and-circumstance-filled state visit — including military honors and a state dinner.

But some members of Germany's opposition parties feel that any sort of visit would send wrong signals.

Erdogan "is no normal president in a democracy," cautioned Cem Özdemir, an MP with the environmentalist Greens.

The Turkish leader has transformed his country "into a kind of Turkmenistan or Azerbaijan with censorship, despotism, nepotism and autocracy" and should be received as such during any visit to Germany, Özdemir told the newspapers of the Funke media group.

He urged the German government "to make it clear that any attempt to build Turkish nationalist-fundamentalist parallel structures here will not be tolerated."

The far-right Alternative for Germany (AfD) called for the visit to not take place at all, with AfD parliamentary group leader Alice Weidel saying Erdogan "should stay home."

"The government must certainly not allow Erdogan to hold another propaganda show in Berlin," Weidel wrote in a post on Facebook, adding that such an event would attempt to "incite citizens with Turkish backgrounds and residents of our country against Germany and German society."

German Chancellor Angela Merkel's government said on Monday that it was "of course" open to discussions with Erdogan and emphasized Turkey's role as a "close and important partner."

Politicians within Germany's governing coalition also viewed the state visit more positively, although they were not without their caveats.

"I've never been convinced by the argument that it would be better not to talk at all with difficult partners," Foreign Minister Heiko Maas, a member of the Social Democrats (SPD), told the daily Bild.

Members of Merkel's Christian Democrats (CDU) and their Bavarian sister party, the Christian Social Union (CSU), viewed the visit as an opportunity to address outstanding issues.

"We've already rolled out the red carpet for many other heads of state with blood on their hands. If we want to speak only with democratic leaders, then Germany will soon be very alone on the world stage," Elmar Brok, a CDU politician and the chair of the European Parliament Committee on Foreign Affairs, told Bild.

Jürgen Hardt, the foreign policy spokesman for the CDU/CSU parliamentary group, said he "welcomed" the news of Erdogan's possible visit. Still, he noted that it was important for Berlin to address outstanding issues with Germany, such as the detention of German citizens in Turkey.

"During this visit, [...] the German government should not miss any opportunity to also discuss critical issues between Germany and Turkey," Hardt said in a statement.

Erdogan on Özil affair: 'Such racist treatment is unacceptable'

Erdogan and his government have been heavily criticized by Germany and other Western allies over the state of civil rights in Turkey and its leaders' growing authoritarianism.

In the wake of a failed 2016 coup, the Turkish government carried out a sweeping crackdown that has seen numerous Erdogan critics detained — including German nationals.

Although Die Welt correspondent Deniz Yücel and human rights activist Peter Steudtner have since been released, several German nationals are still being held in detention.

Erdogan has also been vocal in his criticism of Germany, particularly after Berlin banned Turkish politicians from campaigning in Germany during a constitutional referendum last year. Erdogan also backed football star Mesut Özil's recent decision to leave the German national team over accusations of racism. Özil had also sparked controversy for meeting with Erdogan in May in London.

Despite tensions, the NATO allies are also dependent on one another.

Germany and other European Union countries have relied on Turkey to slow the number of refugee and migrant arrivals in the bloc as part of a 2015 deal. Turkey, on the other hand, is looking to boost its fragile economy amid high inflation.

Should the visit come to fruition, it would be Erdogan's first official trip to Germany since 2014, as well as his first since he assumed office as president.

President Erdogan announced the meeting without confirmation from his counterparts in the other three countries. Russia and Turkey have backed opposing sides in the conflict. (29.07.2018)