Support for Erdogan was proportionally higher among the Turkish community in Germany than it was in Turkey. That, alongside celebrations in German cities after Erdogan won the election, has drawn criticism.

Nearly two-thirds of votes cast by the Turkish community in Germany went to President Recep Tayyip Erdogan in Sunday's election, far more than the support he averaged in Turkey, according to initial results.

Erdogan supporters waving Turkish flags and chanting slogans reportedly took to the streets in multiple Germany cities to celebrate after the authoritarian ruler claimed victory in the election on Sunday night.

In Berlin, hundreds of Erdogan supporters celebrated in Breitscheidplatz and honking motorcades cruised down Kurfürstendamm avenue. Calls of "Recep Erdogan, our leader" could be heard, local media reported.

German lawmaker and former Greens party co-leader Cem Özdemir, who is of Turkish origin, criticized celebrations in the streets of Berlin.

"Let's face it: The celebrating German-Turkish Erdogan supporters not only celebrate their autocrat, but also express their rejection of our liberal democracy. Like the AfD. We must worry about this," he wrote on Twitter, referring to the right-wing Alternative for Germany (AfD).

In Dortmund, a journalist shared a video of Erdogan supporters with Turkish flags shouting "Allahu Akbar" (God is Great) and slogans against the Kurdish militant group PKK.

Marco Bülow, a member of the Bundestag for Dortmund with the Social Democrats, wrote on Twitter: "Sorry, but that makes me sick."

In the western city of Cologne, numerous Erdogan supporters in a motorcade traveled along the Hohenzollernring waving Turkish flags and shooting fireworks. 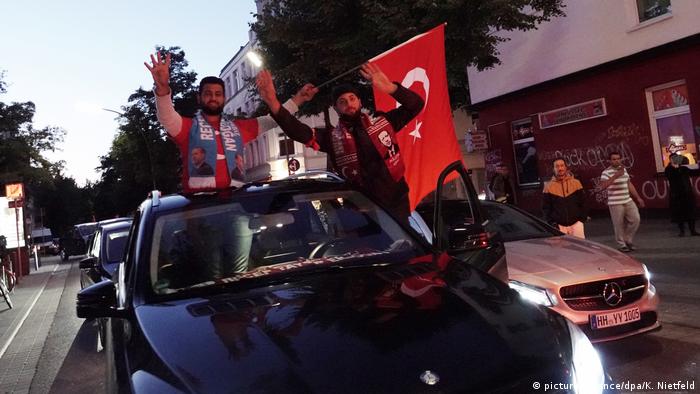 Erdogan supporters in Hamburg drive in a motorcade celebrating his presidential victory on Sunday.

Erdogan more succesful in Germany than in Turkey

Read more: Why many Turks in Germany voted 'yes' in Erdogan's referendum

Turkey's President Recep Tayyip Erdogan has won another term, securing an outright majority according to official results. The elections are the first held under a new system which gives the president expansive powers. (24.06.2018)

Cem Özdemir, a vocal critic of the Turkish government, was given a police bodyguard after meeting Ankara's delegation to the MSC, a media report says. He said the delegates showed that "they were not pleased" to see him. (18.02.2018)