Turkey's president, Recep Tayyip Erdogan, has won another term, securing an outright majority according to official results. The elections are the first held under a new system which gives the president expansive powers. 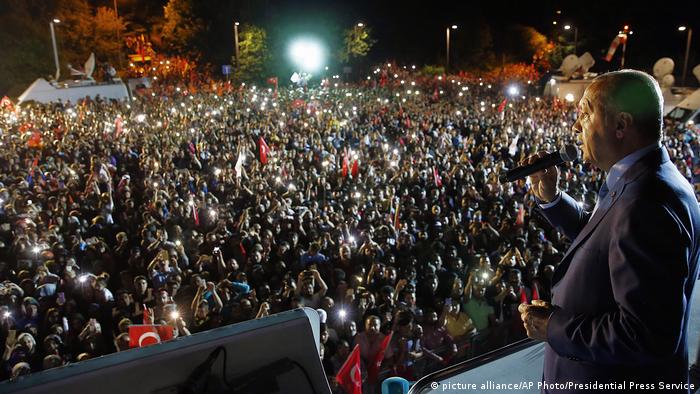 Turkish President Recep Tayyip Erdogan was declared the winner of presidential elections on Sunday, ushering in a new political system that dramatically expands his powers.

Erdogan won an "absolute majority" of votes, the head of the Supreme Election Council, Sadi Guven, confirmed early Monday, after the opposition cast doubt over the election results.

The new system gives the president expansive powers that critics and the West say sound the death knell for Turkish democracy.

"Our people have given us the job of carrying out the presidential and executive posts," Erdogan said on television from Istanbul before heading to Ankara to address party supporters. "I hope nobody will try to cast a shadow on the results and harm democracy in order to hide their own failure."

Other Erdogan rivals, Meral Aksener of the right-wing Good Party and the imprisoned Selahattin Demirtas of the pro-Kurdish Peoples' Democratic Party (HDP), each had around 8 percent.

Speaking at the headquarters of the center-left Republican People's Party (CHP) party, Ince addressed Erdogan directly asking him to "represent 80 million," referring to the entire population of Turkey.

"You are the president of us all," he said.

At the same time, Ince slammed the vote as "unfair" and "marred by blood," and warned Turkey was slipping towards one-man rule.

Ince also ejected a TV crew from the state-funded broadcaster TRT from his press conference, accusing them of bias.

Erdogan's People's Alliance, which includes his Justice and Development Party (AKP) and the ultra-nationalist Nationalist Movement Party (MHP), combined were on pace to win 54 percent of the vote for parliament, according to Anatolia. That is enough to give the two parties a 343 seat majority in the 600-seat parliament, according to early results.

However, the AKP secured only about 42 percent, meaning with 293 seats it lost its parliamentary majority for the first time in nearly a decade and a half. Meanwhile, MHP appeared to do far better than polls and political observers had anticipated with about 11 percent support.

"The electorate has decisively approved Erdogan as president as well as his presidential system, but with one caveat, they did not give AKP a majority in the parliament," Kemal Kirisci, the director of the Turkey Project at the Brookings Institution, told DW. "This will weaken Erdogan’s strongman rule and force his hand to seek shifting coalitions, leaving the opposition to play a role of checks and balances."

The opposition National Alliance grouping together with the nationalist Good Party, secularist CHP and a small Islamic-leaning party were set to win 34 percent of the vote.

Crucially, the left-wing HDP was on track to win 11 percent of the vote, suggesting that some non-Kurdish voters may have strategically voted for the party. Under Turkey's complex electoral rules, if the HDP had failed to clear the 10 percent threshold nearly all of its seats would have gone to the AK Party.

Voter turnout for the election was a high 87 percent. More than 59 million Turkish citizens, including about 3 million living abroad (mainly in Germany), were eligible to take part.

Read more: Half of Turks in Germany voted in 2018 election

For the opposition, Sunday's vote was viewed as a last chance to reverse 16 years of increasingly authoritarian rule by Erdogan and his AKP. The elections had originally been scheduled for November 2019, but Erdogan brought them forward. Polls leading up to the vote had indicated that Erdogan might not win the first round, but would likely win the presidency in a second round runoff against Ince. 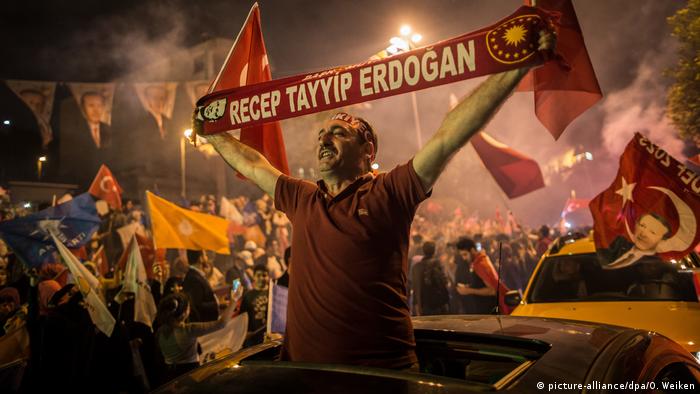 Supporters of Erdogan were quick to celebrate his victory

The opposition alliance and HDP had hoped to at least capitalize on economic and political discontent to prevent the AKP-led alliance with the MHP from securing a majority in the now considerably weakened parliament.

Having come short of expectations, "a great deal now hinges on how the opposition chooses to respond and what happens to the enormous energy generated by the opposition campaign," Nicholas Danforth, a senior policy analyst at the Bipartisan Policy Center, told DW.

Meanwhile, Erdogan still faces a range of economic and diplomatic problems, "having promised his supporters that he will now have the power to resolve them single-handedly," Danforth said.

One of the big suprises of the election was that the MHP did so well. The party had been written off when the ultra-nationalists splintered, with Aksener forming the Good Party due to the backing MHP leader Devlet Bahceli has given to Erdogan.

The MHP's success shows that Erdogan made the right calculation to join forces with the ultra-nationalists under new electoral rules that allowed alliances.

However, the electorial coalitions don't necessarily transfer into parliament, and the suprising extent of the MHP's gains now gives it the potential to play a key role in parliament.

In the run-up to the vote, the opposition had expressed concerns over possible fraud due to recent changes in the electoral law and allegations of irregularities in the April 2017 constitutional election.

Alongside international observers, opposition parties and NGOs deployed up to half a million people at polling stations to monitor the election.

The campaign was also run in an environment where the AK Party and Erdogan held incumbent advantages, with massive resources, the power of the state and domination over the media. The country is still under a state of emergency implemented in the wake of the July 2016 failed coup attempt.