A generation has grown up with Erdogan in power as prime minister or president. These young voters and their disparate views will determine their country's election and its future. Julia Hahn reports from Istanbul.

Whenever a ferry docks at the Uskudar pier on the Asian side of the Bosphorus river, Emin Sarioglu is there to greet its passengers. He tirelessly waves a massive Turkish flag, its white crescent moon and star emblazoned upon shiny, fiery red fabric.

Sarioglu is in the Uskudar neighborhood of Istanbul to campaign for President Recep Tayyip Erdogan's Justice and Development Party (AKP). Emin is 28 years old. He studied sports management, but these days he is campaigning around the clock for the president. He has admired Erdogan for as long as he can remember. "Some say our president has grown tired, but that's not true. He's bursting with energy. And that inspires me. If Erdogan isn't tired, then we young people shouldn't be tired either," says Emin. As far as Emin is concerned, Erdogan and his conservative Islamic AKP could continue to govern for decades. 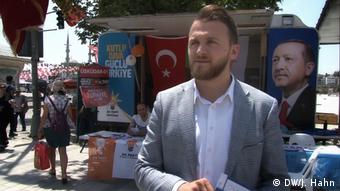 In neighboring Kadikoy, Cansu Irem Kalender is actively campaigning to make sure that will not be the case. "We say enough of this one-man regime," she yells into her megaphone. Cansu is campaigning for the opposition Peoples' Democratic Party (HDP) and its presidential candidate, Selahattin Demirtas, who has spent the last 20 months sitting in a jail cell while awaiting trial for alleged ties to terrorist organizations. "Things must finally change," says Cansu. "Many people are arrested for no reason and no one cares."

Cansu is 19 and a trained legal assistant. Now she hopes to win a seat in the Turkish parliament as a candidate for the HDP. Like Emin, she cannot remember a time when Erdogan did not lead the country. Yet unlike her compatriot, she has had enough of the president: "He spends money on war instead of education. He is a warmonger and a nationalist. He doesn't deal with the real problems citizens face. That's why we say no more Erdogan." Cansu adds, "He always boasts about all of the streets and bridges he builds. But many people don't have enough to eat. Streets don't help them." 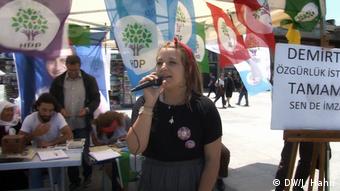 The future in their hands

Turkey is a young country. Roughly half of those eligible to vote are under the age of 30. This year, more than 1.5 million Turks will be old enough to cast their first ballot. They make up an entire generation that has grown up under Erdogan, who has been in power for 15 years, first as prime minister and then as president. Should he win Sunday's election, his power would be nearly unlimited, and he could serve for at least two more terms. Reliable polling for the likely choice of the young voters does not exist. Still, many young Turks have a very clear vision for their country's political future.

One pedestrian with long, dark hair says: "Everything has an expiration date, and Erdogan's has long passed." A young man shakes his head indecisively: "I don't know if I'll vote for Erdogan, but I don't think anyone else can fill the position." Another has no doubt: "We are happy with the Turkey that Erdogan has built. He built streets and bridges and reformed the healthcare system."

Cansu takes a break from campaigning to meet with friends in one of Kadikoy's many cafes. None of them want a future under Erdogan. The economic situation is bad, and there are not enough jobs, they say. Currently, youth unemployment in Turkey stands at 20 percent. They also complain there isn't enough freedom, and they fear Erdogan will transform the country into a surveillance state. "We are not allowed to say what we think. Luckily, Erdogan cannot look into our heads — not yet, at least," says Cansu. "But he decides everything: What we are allowed to learn, and what we are allowed to see. Things can't stay this way. We want to laugh when and where we like. We want to wear whatever we want. These are our lives, our bodies."

Meanwhile, AKP campaigner Emin is going door-to-door in Uskudar, making the case for Erdogan. Emin is convinced that the party is the best choice for young people. He says Erdogan is the only person that can solve the country's problems. "We are going to improve a few things in the education system and tackle unemployment, too," he says. "We are there for the young people. And I think we are the only party that can make that claim."

Cansu and Emin — two young Turks with two very different visions for their country's future. On June 24, it will become clear which path Turkey will take. 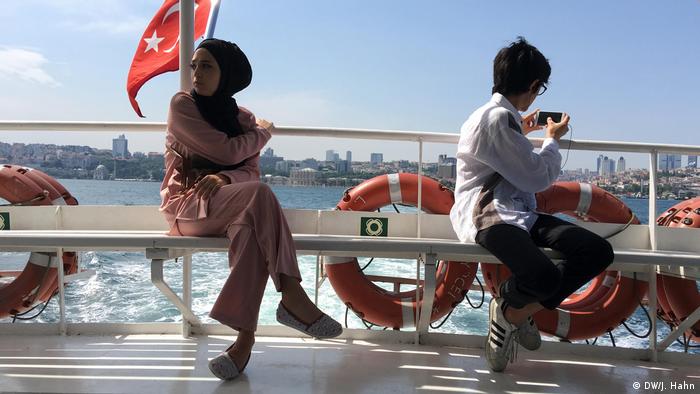 Recep Tayyip Erdogan has won every election in Turkey for the past 16 years. The current economic crisis means he is now in danger of losing his parliamentary majority — and re-election as president is far from certain. (18.06.2018)