Turkey elections: Can Erdogan really lose? | Europe | News and current affairs from around the continent | DW | 18.06.2018

Recep Tayyip Erdogan has won every election in Turkey for the past 16 years. The current economic crisis means he is now in danger of losing his parliamentary majority — and re-election as president is far from certain. 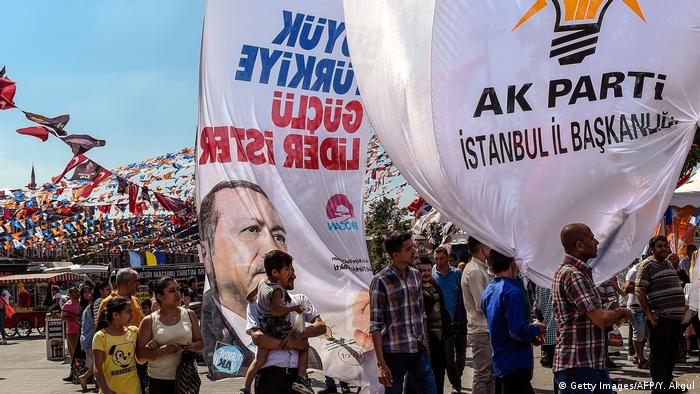 If the latest opinion polls are to be believed, between 45 and 55 percent of the Turkish electorate will cast their vote for the incumbent President Recep Tayyip Erdogan in parliamentary and presidential elections on June 24th. In reality, though, that figure could be far lower.

Hakan Bayrakci owns the opinion research institute SONAR. He says the people in power in Turkey have created a climate of fear, and as a result almost ten percent of voters won't be open about their preferred candidate. According to Bayrakci, these voters give false statements in surveys, meaning that it's highly likely the election result will deviate from the opinion polls.

Since Turkey adopted constitutional reforms in a referendum in April 2017, the electorate has had two votes: one for the new president, the other to decide which parties will have seats in parliament. Erdogan has not lost an election in 16 years, but the forthcoming elections are likely to be the most difficult of his political career. His Islamic-conservative Justice and Development Party (AKP), which has shaped Turkish politics ever since his first victory in 2002, is also preparing for its toughest election yet.

Turkey's problems are getting worse

Özer Sencar, who owns the opinion research institute Metropoll, has been following Erdogan's career for 25 years. He says Erdogan has never run such a bad election campaign. Erdogan no longer determines the agenda or presents any vision for the future; when he appears in public he seems weak and lacks passion, Sencar told DW: "He's never made so many mistakes in his speeches." Sencar doubts Erdogan will hold on to power.

Erdogan has ruled Turkey for 16 years and has long been regarded as the strongest force in Turkish politics. His greatest success was the revival of the economy. Over the past decade and a half, average annual income has risen from the equivalent of $3,500 (€3,020) to $10,000 and there has been a construction boom all over the country.

Today, though, the Turkish economy is not in good shape. Since the attempted coup in July 2016 and the state of emergency that followed, the Turkish lira has lost more than 30 percent of its value. There is almost no investment any more. The international markets' confidence in the Turkish economy is dwindling. Erdogan, who publicly rejected interest rates based on religious conviction, had to turn a blind eye when the Turkish central bank raised key rates in recent weeks. Turkey now has the fourth-highest interest rates in the world, after Argentina, Venezuela and Iran.

"For the first time in 16 years Erdogan is not successful. He can no longer run the economy. The problems in education and health care are also increasing," Sencar said. Turkish people are starting to feel the effects of the economic crisis, he added, which explains the lack of enthusiasm at Erdogan's election campaign events.

Gülfem Saydan Sanver also observes that Erdogan is finding it increasingly difficult to communicate his message to the people. Sanver won the Pollie Award of the American Association of Political Consultants with her doctorate on the AKP's electoral success. She argues Erdogan's one-man shows within the party are now a disadvantage. "He stands there alone, at meetings and giving speeches, and he can't get his message across,” said Sanver.

The main beneficiary, Sanver says, is Muharrem Ince. The presidential candidate of the social-democrat Republican People's Party (CHP) has recently increased his opinion poll rating to over 30 percent, and the main opposition is now even more motivated to win the election. "Erdogan is still trying to play to the fears of right-wing conservative voters," Sanver told DW. This, she says, is why he has been talking about military operations against the Kurdish Workers' Party (PKK) in northern Iraq in recent election speeches, in an attempt to stir up fear among the electorate. If voters are afraid, they fear a change of leader and are more likely to vote for the current president.

End of the strong presidential system?

Recent polls suggest Erdogan could still win the presidential election in the second round. The so-called "republican alliance" of the AKP and Nationalist Movement Party (MHP) could, however, forfeit its parliamentary majority to the opposition, which would mean Erdogan would no longer have a power base in parliament. The strong presidential system, which opposition politicians view as a form of dictatorship, would not materialize for him.

"If the AKP were to lose its parliamentary majority, Erdogan will face hard times ahead," said Sanver. Following the imposition of the state of emergency, Erdogan was able to pass laws and govern by decree. Sanver's assessment: "If the AKP no longer has a majority in parliament Erdogan will lose some of his current power, even if he's re-elected. He won't be an effective president, and he'll have to recognize the authority of the parliament."

Voting for Turkish voters abroad is underway. But as a visit to the polling station at Berlin's Turkish consulate found, opinion on the future of Turkey and President Recep Tayyip Erdogan is divided. (07.06.2018)

Turks living in Germany will be able to vote in their home country from this Thursday. Some German politicians fear that many are being pressured to vote for Erdogan and his party. (07.06.2018)