Could Turkey′s opposition reset ties with the EU? | Europe | News and current affairs from around the continent | DW | 22.06.2018

Could Turkey's opposition reset ties with the EU? 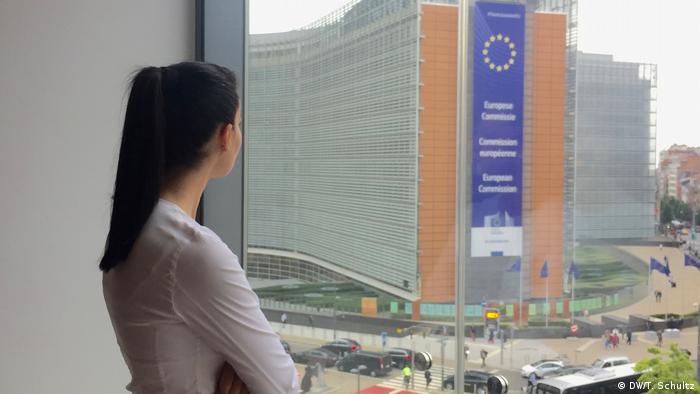 The most dominant object — literally and figuratively — in Kader Sevinc's (above) view of the world is the European Union. Representing Turkey's largest opposition party, the Republican People's Party (CHP) in Brussels, Sevinc chose an office that looks directly at European Commission headquarters in one direction and the European External Action Service in another — so close she exchanges waves with EU officials from their windows.

It's taken a third of her lifetime, but Sevinc believes having her dream of Turkey being part of those institutions is also within sight politically for the first time in many years. When she came from Turkey to work in the European Parliament more than a dozen years ago, she thought her country was on a fast track to join the European Union .

"I remember those days as very hopeful days," she told DW. Negotiations with Ankara for its EU membership were opened the same year she arrived in Brussels in 2005 and she believed both the government and opposition were prepared to embark on the necessary reforms.

"At the time we thought Turkey would move much quicker," Sevinc explained, "and that the EU would be much better prepared for Turkey's accession. Unfortunately where we ended up is completely the opposite."

However, she said, "We are going to change that."

By "we," Sevinc means the CHP and its presidential candidate Muharrem Ince. For the first time since President Erdogan and his fundamentalist Justice and Development Party (AKP)  took power in 2002, the CHP is polling high enough — helped by a struggling economy — to pose a real challenge in the June 24 elections.

Sevinc is counting on the CHP finally kicking Erdogan off his perch and his party out of dominance in parliament, if not in the first round, then in a second round that looks likely at this point. If Ince wins, he pledges to reverse recent legislation engineered by Erdogan to consolidate authority in his own hands, to lift the longstanding "state of emergency" within 48 hours, to make human rights a priority and to again steer Ankara toward Brussels. Sevinc knows a new Turkish government would also have to convince a now-skeptical EU that Turkey would return to democratic values.

"Unfortunately what Erdogan did by calling Europe 'Nazis' and trying to use the Turkish diaspora as a tool or arm against Europe and European governments and creating discomfort in those countries was that all these people got very disappointed with Turkey," Sevinc said.

European parliamentarian Rebecca Harms is one of those disappointed people, having devoted much of her time and effort to improving EU relations with the country. Speaking to DW in Strasbourg, Harms was clearly exasperated. "There is only little space left for some tiny little media and news outlets for critical reporting," she said. "You have thousands of people imprisoned for political reasons. It's a huge purge against opposition people. So it's really not the democratic Turkey which we hoped for — and worked for." 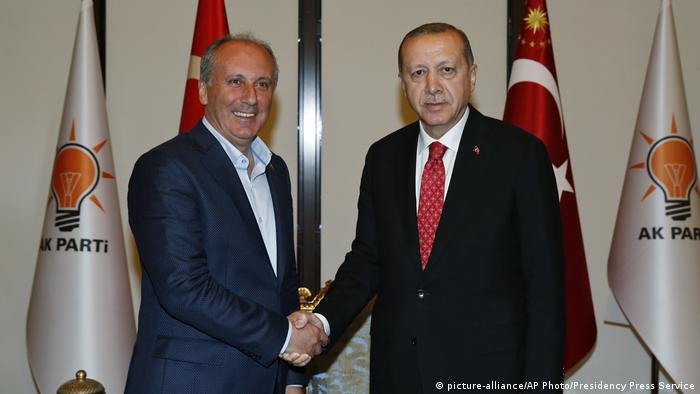 Muharrem Ince (left), leader of the main opposition CHP could pose a problem for President Erdogan

If CHP comes to power, "We will revive these relations," Sevinc said confidently. "We will make Turkey again part of these European circles. Europe will know that Turkey is an ally, not an enemy."

Marc Pierini served as the EU's ambassador to Turkey from 2006 to 2011 and now analyzes its political developments at the Carnegie Europe think tank. Given that Erdogan is still enjoying a lead in the polls, Pierini is skeptical of scenarios that envision a "complete revolution" against AKP and a rapid rapprochement between Turkey and the EU.

If Ince were to win, Pierini said, Brussels' first reaction would be "relief" because the "daily aggravation and the insults will have gone" with the departure of Erdogan, who, he said, has "destroyed any prospect for progress." However, Pierini warned, a CHP routing of AKP  doesn't mean EU leaders would suddenly find Turkey's accession "much more palatable."

"What you might face is a complete change of the atmospherics, much more cordial relations and progress on other things, such as the customs union, visas and so on," he said. "But it will still be difficult. It will still depend on how much the new leadership would be willing to restore rule of law. They say they will but we have to see it happening."

EU must stand up to Erdogan

What if, on the other hand, Erdogan wins and continues in an authoritarian direction? Roland Freudenstein of the Martens Center, the European People's Party official think tank, told DW in that case the EU should consider formally suspending accession talks, even if that pushes the Turkish leader toward Russia and Iran. "The question is what do we have to give up in order to make him turn around? I think it would be too much. It would be our own identity. We would have to stop being the West and that's a price too high to pay."

But for now, Erdogan's popularity appears to be declining and Kader Sevinc's optimism is growing. Gazing out of her window, she mused, "Every day when I come to my office, looking at these institutions, I want to see a Turk running [them]. Preferably a woman!"