Turkish voters in 60 countries have been casting their ballots in the run up to elections in Turkey. Roughly one in two voters living in Germany cast their ballot in the snap poll. 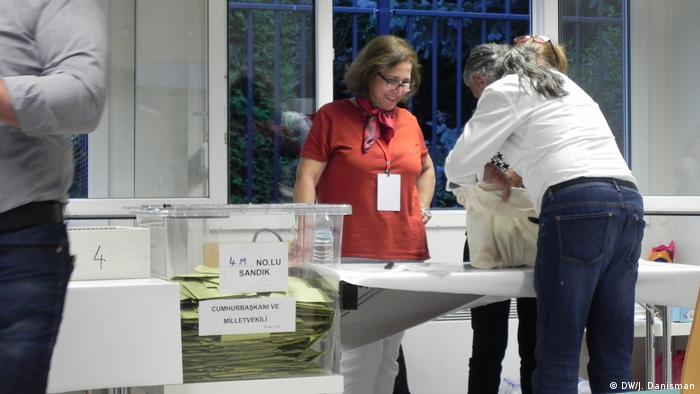 Half of Turkish voters in Germany submitted ballots ahead of Turkey's snap election on June 24.

Out of the 1.44 million Turks eligible to vote at the polling stations set up in the country's consulates and elsewhere, roughly 718,000 or 49.7 per cent, cast their ballots.

Read more: The puppy, populism and the dance: Elections in Turkey between sanity and insanity

Polls were opened in Germany on June 7 and closed on Tuesday at 9 p.m. Turkish voters were able to pre-vote in 60 countries; they can still vote at Turkey's border gates until June 24.

Inside Europe: Turkish in Germany

Turkish citizens living in Germany represent the largest national group of the 3 million registered voters outside Turkey – 5 percent of the overall electorate.

The highest voter turnout was in cities with large Turkish populations, such as Cologne, Düsseldorf and Essen.

Turkish President Recep Tayyip Erdogan, who is seeking re-election, generally has support among Turks in Germany, but relations have been strained between Germany and Turkey since a failed coup against Turkish President Erdogan in 2016 and the subsequent crackdown that followed.

Ahead of the vote, some German politicians expressed concern that Turks might be being pressured to vote for Erdogan.

"A mood of intimidation has spread among citizens of Turkish origin in Germany in recent years," said Gokay Akbulut, MP for the Left Party. "Many no longer dare to express their political views openly because they fear that this could create problems for relatives in Turkey," he continued.

German MP for the Christian Democrats, Roderich Kiesewetter, said many Turkish voters were concerned about civil rights in the country.

"Many eligible voters have become increasingly critical of the negative effects on the Turkish economy and civil rights that have resulted from Erdogan's restructuring of the country," Kiesewetter said

The Turkish Foreign Ministry cautioned its citizens to take care in Germany during the election cycle. The travel advisory comes amid a worsening of diplomatic relations between the NATO allies. (09.09.2017)