Trump-Kim summit: Stakes are high for US to show progress on North Korea | Asia| An in-depth look at news from across the continent | DW | 26.02.2019

Trump-Kim summit: Stakes are high for US to show progress on North Korea

US President Donald Trump and North Korean leader Kim Jong Un are sitting down in Hanoi for their second meeting. Denuclearization, sanctions relief and a potential end to the Korean War are all on the table. 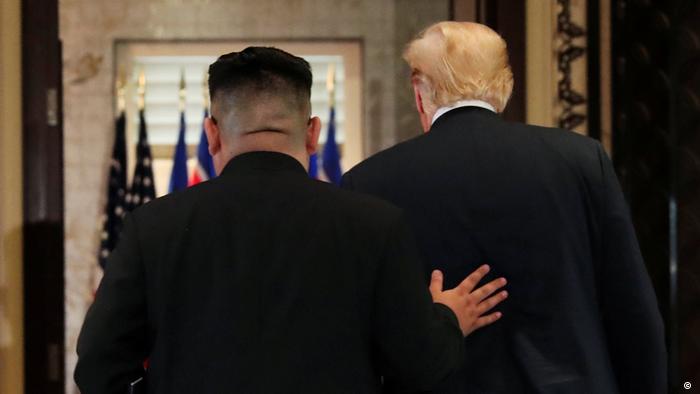 The stage is set in Hanoi for a two-day summit between US President Donald Trump and North Korean leader Kim Jong Un. During their meeting, which kicks off on Wednesday in Vietnam's capital, the leaders are expected to discuss conditions for the denuclearization of the Korean Peninsula, along with potentially ending the Korean War.

Following the last Trump-Kim summit in June 2018, progress on getting North Korea to give up its nuclear weapons has been incremental. Aside from a non-binding promise to "denuclearize," North Korea has not curtailed its weapons capacity.

Experts say that the Hanoi summit needs to produce a framework for further negotiation in order for the US to claim progress on denuclearization. The stakes are high for deliverables that go beyond the symbolic value of the Singapore summit in 2018.

"Ratings for the first summit were good, and both leaders see benefit in having a second meeting," said Scott A. Snyder, director of the US-Korea policy program at the US Council on Foreign Relations. Snyder added that the US president's improved relationship with the North Korean leader has yet to translate into action.

"Trump has bragged about the leadership chemistry, but it has not been replicated at the institutional level," he told DW. "This must happen for leader-led rapprochement to have a catalytic and sustainable effect," said Snyder, adding that this latest meeting would test the theory that these summits are effective in driving forward negotiations.

The effectiveness of Trump's "maximum pressure" sanctions campaign is also on the line as negotiations move forward. US sanctions could become less potent with time, as North Korea finds more ways to circumvent them. The US continuing to press on sanctions could also interfere with the process of détente between the two sides. Trump has said ahead of the summit that sanctions are "on in full."

Stephen Biegun, the US special representative for North Korea, said in a speech last month that sanctions wouldn't be lifted until North Korea gets rid of its nuclear weapons. Sanctions currently prevent North Korean exports and limit any international economic cooperation with the reclusive state.

Although the summit meetings and inter-Korean rapprochement are a welcome step away from 2017's "fire and fury" rhetoric between Pyongyang and Washington, North Korea's nuclear weapons and ballistic arsenal remain a threat to the US, and its regional allies South Korea and Japan.

And even if the US, along with the international community, continues to require "complete and verifiable denuclearization" in exchange for sanctions relief on Pyongyang, there is little indication that the Kim regime has any incentive, or intention, to get rid of its nuclear weapons.

On Sunday, President Trump seemed to dampen expectations of a breakthrough. "I don't want to rush anybody. I just don't want testing. As long as there's no testing, we're happy," he said.

"Expecting North Korea to simply and rapidly give up its nuclear weapons program in the current political environment — where there is no trust — was unrealistic to begin with," said Jenny Town, managing editor of the 38 North, a North Korea research and analysis website.

"North Korea has been pretty consistent about expressing the political will to work toward denuclearization as the relationship with the US changes accordingly," she told DW, adding that the follow-up of the Singapore summit wasn't as much of an impasse as it was portrayed to be.

"All negotiations start with these sort of maximal demands," she said. "I think that there has been a learning curve over the past seven months about what won't work and what might be more effective."

At the Singapore summit in June 2018, a joint statement was issued, but its language was criticized for being light on specifics. In the statement, Kim Jong Un pledged an "unwavering commitment" to the "complete denuclearization" of the Korean Peninsula.

"The Singapore summit declaration has been difficult to implement through working-level negotiations," said Snyder, adding that the Hanoi summit meeting may provide the last opportunity to create an actionable process that can be followed through at the working level between the two sides.

According to Snyder, US negotiators have pointed out differences between Washington and Pyongyang on the meaning of denuclearization, and that the Hanoi summit could contribute to making progress on the issue.

For the North Koreans, the denuclearization of the Korean Peninsula would also include the removal of the US "nuclear threat."

"North Korea defines 'denuclearization of the Korean Peninsula' much more broadly than the US," Kelsey Davenport, director of nonproliferation policy at the Arms Control Association in Washington, told DW.

"The US is focused on verifiably dismantling North Korea's nuclear weapons, missiles, and means of production. Pyongyang is focused on eliminating nuclear threats in its vicinity," she added.

"Kim Jong Un's ultimate priority is the security of his regime," said Davenport. "However, the threat of miscalculation or escalation leading to conflict between the US and North Korea is significant," she added.

North Korea's weapons program is shrouded in secrecy, but Pyongyang has repeatedly shown the world that it is capable of launching ballistic missiles that could strike targets in South Korea, Japan, Russia and China.

"It is difficult to estimate the size and scope of North Korea's nuclear weapons program given the number of covert sites involved and uncertainty surrounding the operating histories of these facilities," said Davenport.

Read more:  Is North Korea defying the US in expanding weapons production?

The Arms Control Association estimates that North Korea has produced enough nuclear material for up to 60 warheads, but the country may have only assembled roughly 10-20 weapons. Additionally, North Korea can deliver nuclear weapons on short and medium-range missiles.

"That number will continue to grow, absent a verifiable commitment from Pyongyang to halt production of nuclear materials for weapons," said Davenport.

"While North Korea has tested longer-range ballistic missiles capable of targeting the United States with nuclear warheads, these systems have been tested so few times that the accuracy and reliability are questionable," she added. 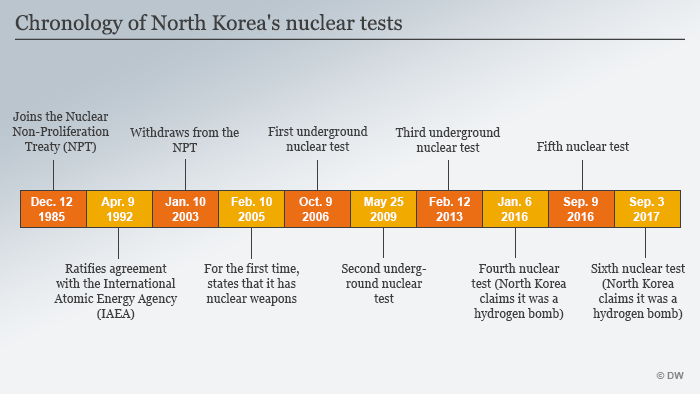 In the past year, North Korea has offered to close missile test sites, along with shutting down the Yongbyon Nuclear Scientific Research Center. Yongbyon includes a nuclear reactor and a plutonium production plant, and it is considered a central part of Pyongyang's nuclear production capability.

North Korea has shut down Yongbyon in the past. In 2007, its operations were halted only to be started up again once relations soured with the US.

According to satellite imagery analyzed by 38 North, as of December 2018, the facilities at Yongbyon appeared to be well maintained, but not in operation.

"Reestablishing an inspection regime for Yongbyon is a good — but not unprecedented — first step. It is unsatisfactory if it turns out to be the last step," said Snyder. 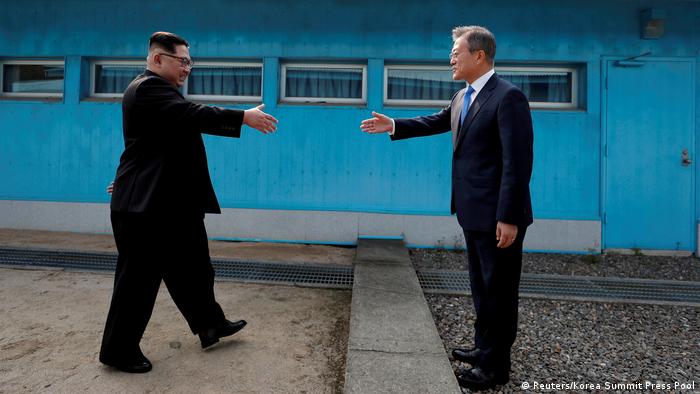 An end to the Korean War?

There has also been talk in the run-up to the Hanoi summit about an official end to the Korean War, which ended with an armistice and not a peace treaty. Technically, the US and North Korea have remained at war since 1953.

"The possibility is there," Kim Eui-kyeom, a spokesperson for South Korea's President Moon Jae-in told reporters on Monday. President Moon has been a strong advocate for a declaration formally ending the war.

"I do think this is likely to happen, and I think the North Koreans expect it," said Town. "It was reported that in Singapore this political declaration was one of the things that President Trump had promised," she said. The expert added that such a declaration would not have legal standing; it would therefore be easier for the US to put its stamp of approval on it rather than on a peace treaty.

"It would be a commitment to begin negotiations on a peace treaty to end the Korean War," she said. "The advantage of this is that it does provide a tangible manifestation of a changing US-DPRK relationship," said Town, adding that this could be used by Pyongyang to signal progress domestically.

In the afterglow of the latest Kim-Moon summit, negotiations between the US and North Korea appear to be back on track. However, Pyongyang won't accept anything less than a formal end to the war, says DW's Martin Fritz. (20.09.2018)

Shortly after announcing a trip to North Korea, Secretary of State Mike Pompeo has been ordered not to go by President Trump. The US leader implied that future visits would hinge on resolving a trade dispute with China. (24.08.2018)

In a rare letter to Seoul, North Korean leader Kim Jong Un has said he wants more meetings next year with South Korean President Moon Jae-in. The aim is "to solve the issue of denuclearizing the peninsula." (30.12.2018)