Washington is angry at widespread non-compliance with sanctions on Pyongyang and has called an urgent UN Security Council meeting. A new report suggests North Korea is smuggling coal at sea and flouting an arms embargo. 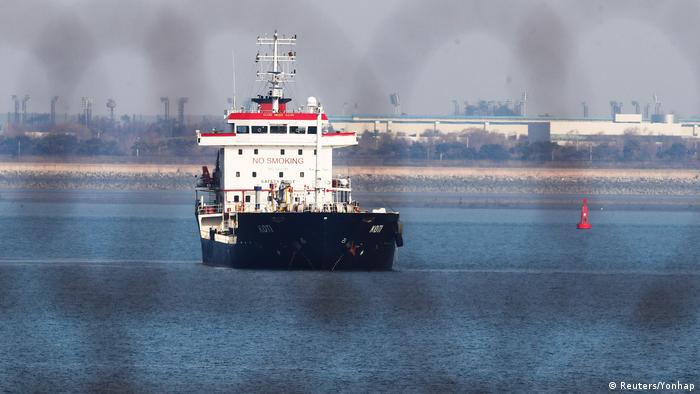 The United Nations Security Council will convene an urgent meeting on Monday to discuss what Washington says are efforts by some countries "to undermine and obstruct" sanctions against North Korea.

In a statement, the US mission to the UN said the agenda would be "to discuss the implementation and enforcement of UN sanctions" on Pyongyang that were designed to pressure the isolated state to give up its nuclear weapons.

Washington has accused Moscow of altering an independent UN report to hide language that implied Russian companies violated sanctions on the North.

China and Russia among worst offenders

The US has previously accused Russia and China of making illegal petroleum exports to North Korea.

Read more: South Korea urges for 'bold decisions' ahead of next Trump-Kim summit

US Secretary of State Mike Pompeo on Friday accused Moscow of working to impair the international sanctions, first agreed in 2006 and subsequently strengthened to severely weaken the North Korean economy.

"Russia has actively attempted to undermine the UN Security Council resolutions, the work of the ... committee at the U.N. that evaluates compliance with sanctions," he told a news briefing at the US State Department.

Pompeo said he hoped the UN sanctions committee would "publish the original document … which shows clear activities related to sanctions and sanctions violations."

The report, which was submitted to the Security Council's sanctions committee last month, warned that Pyongyang had not stopped its nuclear and missile programs and was violating UN sanctions on exports. It said North Korea was smuggling coal at sea, while flouting an arms embargo and financial restrictions.

In July, Washington accused North Korea of "illegally smuggling" refined petroleum products beyond the annual quota of 500,000 barrels allowed under the sanctions.

The dangers of goose-stepping

US documents cited 89 instances between January 1 and May 30 in which North Korean tankers likely delivered refined products "illicitly procured" via transfers from foreign ships at sea.

China, which is Pyongyang's closest ally, is responsible for more than 90 percent of the isolated country's trade.

Other activities cited by the US include cyber theft and other criminal activities, which Pompeo has previously said are "generating significant revenues for the regime and they must be stopped."

On Friday, he said Washington was continuing its dialogue with Pyongyang about "how to effectuate achieving all of the commitments made" at a June 12 summit between US President Donald Trump and Kim Jong Un, the North Korean leader.

Read more: US to resume military drills on Korean Peninsula

Earlier this year, Washington claimed that the sanctions had cut off all North Korean exports, 90 percent of its trade, and disbanded its pool of workers sent abroad to earn hard currency.

Many diplomats and analysts credit the sanctions with helping promote the thaw in relations between North and South Korea, as well as the June meeting between Trump and Kim, at which they agreed to the denuclearization of the Korean Peninsula.

The two countries have inagurated a new complex that will let their officials communicate directly with one another (14.09.2018)

The North Korean regime has staged a massive military parade in Pyongyang to mark the 70th anniversary of the country's founding. It focused on development work and civilian efforts to build the economy. (09.09.2018)