Rights activists have criticized Seoul's decision to reduce human rights funding for North Korea and to funnel financial support into increased economic assistance. What could be the implications of this move? 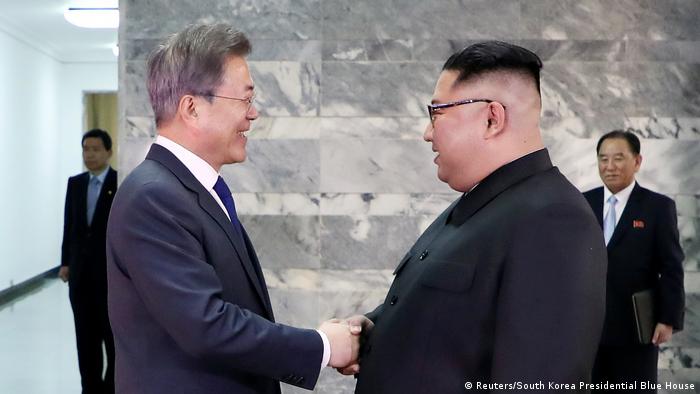 Under the budget bill put forward by President Moon Jae-in's government, spending earmarked for the North Korean Human Rights Foundation has been set at KRW800 million (€620,857), down 92.6 percent from the original sum of KRW10.8 billion (€8.4 million).

Similarly, the budget for the organization's database has been slashed by nearly 71 percent to KRW486 million (€377,201).

Assistance to the more than 31,000 North Koreans, who have managed to flee the regime and settle in South Korea, has been reduced by more than 31 percent to KRW39.9 billion (€31.03 million), with the government saying that fewer North Koreans are defecting and there is therefore less need to support them once they reach the South.

The South Korean government has previously withdrawn funding for a number of organizations, including the North Korean Defector Comradery, a group set up in 1999 to assist some of the people who have managed to flee the regime in finding jobs or to receive education or training.

Read more: North Korean defector: 'I am still not free'

The national government had provided sufficient funds to cover the group's rent and the salaries of two staff, but that has been cancelled, forcing the group to move to a different office and the staff to work for no pay.

Elsewhere, the International Coalition to Stop Crimes Against Humanity in North Korea, which is affiliated with Human Rights Watch (HRW), have said they are struggling to convince government officials to provide them new grants.

Other groups say that donations from companies – apparently sensing the direction the government is taking on the issue of defectors – have also dried up.

In contrast, the budget dramatically steps up the amount that will be spent on cross-border projects with the North.

Similarly, KRW20.5 billion (€15.91 million) is to be spent on promoting people-to-people exchanges across the border, up nearly 59 percent, and KRW1.57 billion (€1.22 million) will be set aside to cover the costs of government talks, an increase of more than 104 percent.

'Ideologically close to the North'

"This government is intent on increasing economic assistance for the regime in Pyongyang, but that does not really come as much of a surprise to many people in South Korea because many of those who make up the government feel ideologically very close to the North," said Song Young-chae, a professor at the Center for Global Creation and Collaboration at Seoul's Sangmyung University and an activist with the Worldwide Coalition to Stop Genocide in North Korea.

"I would say that this decision shows that there are plenty of people in the government who do not really have much interest in protecting human rights in North Korea and who are only interested in building closer ties with the regime in Pyongyang," Song told DW.

"That is the opposite aim of groups like ours, who want to support the people of the North rather than its leaders," he said. "There are many people who realize that the only way that real change can come to the North is for that regime to be broken."

And Song believes appeasing the North will cost ordinary people their lives.

"When funds are taken out of measures to promote human rights and instead put into projects, such as infrastructure development, that directly helps the regime then that allows Pyongyang to spend its own money on exercising control over its people," he added.

"Economic assistance is simply going to make the situation worse for most North Koreans."

Daniel Pinkston, a professor of international relations at the Seoul campus of Troy University, says the South Korean government appears to be trying to use an array of confidence-building measures – such as sporting exchanges and removing references to North Korea as "the enemy" in the latest defense white paper – to win the goodwill of Pyongyang.

But Pinkston says that North Korea has not suddenly turned over a new leaf, and South Korea, the United States and the international community at large will ultimately be disappointed when Pyongyang refuses to eliminate its stockpile of nuclear weapons and long-range ballistic missiles.

"It is not completely clear why Seoul is cutting its spending on human rights efforts in the North, but it may well be out of concern about these organizations becoming visible in the media, their reports and data on human rights abuses being reported," he said.

"The fear is that if they are critical, then the North will be less cooperative."

There are two broad thoughts on human rights in the North among those on the left in South Korea, he said. There are those who refuse to believe that hundreds of thousands of people are in gulags for crimes against the state or simply because a relative was accused of a political crime and that reports of human rights abuses are trumped up by the media.

Others do have concerns about the North's record on human rights, but feel that building a closer working relationship between the two countries will have a more positive impact and that human rights can be better addressed through "quiet, back-door diplomacy," Pinkston said.

"I think they have had to try diplomacy and to work with the North, but I'm not overly optimistic that anything positive will come out of all this," the expert said, adding that it could lead to an even harsher crackdown on North Korea's citizens than we have seen already.