UN rapporteur demands inquiry into North Korean defectors | Asia| An in-depth look at news from across the continent | DW | 11.07.2018

A UN rapporteur on human rights has called for an inquiry into 13 North Korean restaurant workers who defected to the South from China. Pyongyang has demanded their return and rights groups fear for their safety. 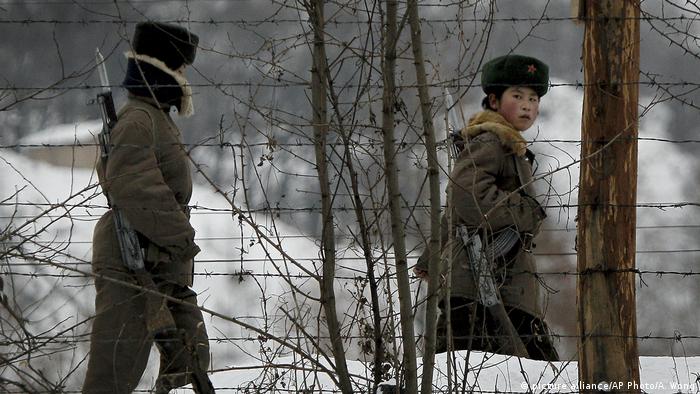 In 2016, 12 North Korean women and their manager who were working in China at a restaurant owned and operated by the North Korean government drew international attention after they ran away to South Korea. They were the largest group to flee the North's clutches since Kim Jong Un came to power in December 2011.

The defection was embarrassing for the North and a public relations victory for the South. However, in May 2018, the restaurant manager, Heo Gang-il, suggested in a television interview that he may not have been completely truthful when he convinced the women to leave the restaurant in the port city of Ningbo and go to South Korea. Heo also said he had been working closely with South Korea's National Intelligence Service.

North Korea responded by saying that the women had been kidnapped and demanded they and the manager be returned to Pyongyang as a condition for continuing dialogue with Seoul. Rights groups supporting North Korean defectors to the South have said they fear that Seoul will comply with Pyongyang's demands, and that the defectors' lives would be in danger.

On Tuesday, the UN special rapporteur on human rights in North Korea, Tomás Ojea Quintana, told a press conference in Seoul that there needs to be a thorough and independent investigation into the case and called for a formal inquiry.

Quintana was in South Korea for a week-long mission to speak with South Korean government officials, human rights activists, North Korean defectors and a few of the women in the group. He is due to deliver a report covering human rights on the Korean Peninsula to the UN General Assembly in October.

Speaking after meeting several of the women, Quintana said, "There is a need to respect their rights as victims. When I say victims, I am implying that they were subject to some kind of deceit in regard to where they were going."

Activists supporting defectors in the South say they find it hard to believe that all of the women were comprehensively misled to the point that they travelled to another country without realizing what they were doing or that today they want to go back to the North.

They insist that it would have been "virtually impossible" to mislead the women into defecting and emphasized that sending any of the women back to North Korea would make them propaganda tools for the North and that they would be severely punished for embarrassing the regime of Kim Jong Un.

Defector activists in South Korea also believe that sending the women back would send a message to other would-be defectors that South Korea will not protect them. At the same time, Pyongyang can gain valuable intelligence on how defectors are assisted in fleeing from the North, along with debriefing and assimilation methods once they arrive in the South.

"These women were closely monitored by North Korean officials when they were in China and none of the defectors that I am friends with can believe that they were completely unaware of what they were doing when they left China," Song Young-chae, a member of the NGO, Worldwide Coalition to Stop Genocide in North Korea, told DW.

Song believes it is very likely that North Korea has managed to communicate with some of the women, either directly or indirectly, and have tried to coerce them to reverse their decisions to stay in the South.

He added that there are numerous accounts of defectors receiving phone calls from North Korean agents saying that family members in the North would be in danger should the defectors not return home.

"They threaten them with their families because it is their weakest point," Song said.

"My defector friends say they are now very worried," he noted. "They worry that this South Korean government will give in to the North and send them back. If that happened, it would be easy to send more back in the future, whenever the North demands it. That would be a tragedy."

"They don't believe the promise that they will be welcomed back in the North and that there will be no punishment for their defection," said Song. "The UN needs to understand the reality of the welcome they face if they go back to North Korea."

Ever since the women fled China, Pyongyang has insisted that they were abducted against their will and has called on the South for their return. With Seoul unwilling to take that step, the regime has approached other organizations demanding a resolution.

In February, a spokesman for North Korea's Red Cross Society said in a statement that the "DPRK strongly demands that South Korea unconditionally repatriate the abducted women citizens after agents of the Intelligence Service and the South Korean authorities … committed the surprise terrorist attack on the order of the witch of the Blue House [then-President Park]."

The statement accused South Korea of "detaining the abductees in solitary cells away from contact with the outside world, imposing mental and physical sufferings, torment, appeasement and deception, threats and blackmail to force defection upon them."

The statement also said the abduction of the women was "an unpardonable violation of the dignity and sovereignty of the DPRK" and a "heinous, inhumane crime against human rights."