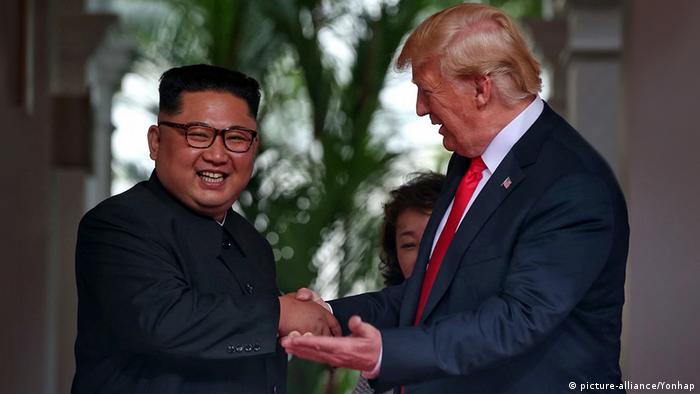 With smiles, handshakes and US President Donald Trump's warm praise for North Korea's dictator Kim Jong Un, a country once called the "hermit kingdom" was hoisted up on to the international stage this week in Singapore.

The two leaders sat side by side like allies, their respective flags on equal footing behind them and Kim appeared like a world leader, while being received like a celebrity by throngs of onlookers on the streets.

Tuesday's meeting with the US president was the pinnacle of an unprecedented international image campaign from the North Korean regime known for its isolation and bellicosity. And Kim, who at this time last time year was exchanging threats of nuclear annihilation with the US, has been trying to transform his image from that of a "maniacal dictator" into an international statesman.

Pyongyang's global public image makeover began in February, with the show of Korean solidarity at the 2018 Winter Olympics in South Korea and the diplomatic imagery of Kim's sister, Kim Yo Jong.

In March, Kim left his country for the first time since taking power in 2011 for a meeting with Chinese President Xi Jinping in Beijing. In April, he became the first North Korean leader to set foot in South Korea. At the end of May, he hosted Russian Foreign Minister Sergey Lavrov in Pyongyang.

However, some analysts say that behind this pageantry and symbolism is a totalitarian state run by a ruthless regime that survives by indoctrinating and enslaving its population.

Taking President Trump's statements to the media after the summit at face value, he seemed to deflect the issue of human rights while praising Kim's "talented" takeover of his father's regime and said he "ran it tough."

Trump admitted that human rights issues were discussed "briefly" and that the situation in North Korea was "rough," but later said "it's rough in a lot of places."

Trump added he thought Kim wanted to "do the right thing." He also said that prisoners being held in North Korean gulags would "be one of the great winners of today."

At no point did the US president use any language that directly addressed or condemned North Korea's well-documented and nefarious human rights violations. On Friday, Reuters news agency reported that Trump said he wasn't pressing Kim on human rights because he didn't "want to start a nuclear war."

Phil Robertson, deputy director of Human Rights Watch's (HRW) Asia division, told DW that human rights needed to be on the agenda at every meeting with North Korea.

"It's absolutely unacceptable to push rights concerns off the table just because some negotiator thinks that talking about rights will upset North Korea's leaders," said Robertson, adding that the regime depends on human rights abuse for its survival.

"They can order the population to do forced labor, including on infrastructure projects that contribute to the nuclear and missile technology projects," said Robertson.

"Since it has the ability to demand and receive complete acquiescence from its population, North Korea can transfer resources away from starving people to be spent on hugely expensive weapons projects without hearing a peep of protest."

The extent of the deplorable human rights situation in North Korea was made clear by a comprehensive 2014 report from the UN Human Rights Council, which relied on witness testimony from those able to escape North Korea.

"The gravity, scale and nature of these violations reveal a state that does not have any parallel in the contemporary world," said the report.

More detailed individual testimony included political prisoners who said they would have to catch snakes and mice to feed malnourished babies, were forced to watch family members being murdered in prison camps and defenseless inmates being used for martial arts practice.

In a 2014 interview, Michael Kirby, the UN committee chairman who oversaw the witness testimony, told DW that the evidence of crimes against humanity in North Korea elicited "revulsion and horror."

"It is very hard to isolate the particular stories, because so many of them were very powerful," said Kirby.

"These [were] simple stories told in simple language by people who have no political hostility but simply have suffered human loss, depravation and human rights violations. These are the stories that had an impact on me, and I believe they have an impact on humanity."

After this week's summit, Kirby told DW that progress on security and improving human rights are interconnected.

"There will be no long-term security in North Korea until the grave human rights situation in the country is addressed and verifiable improvements have occurred, especially in the case of the crimes against humanity which the UN commission of inquiry found to have been established at the time of its investigations," said Kirby, a retired Australian judge.

He added that expectations of North Korea being a "normalized" country could complicate the enforcement of UN sanctions.

"It is not a normal state. It is a most abnormal state and possibly the only remaining fully totalitarian state in the world," said Kirby.

Trump also said after the summit that Kim "loves his people," and after arriving back in the US, the president tweeted that North Korea had "great hope for the future." However, despite Trump's positive rhetoric, there are currently no indications that Kim's international image campaign will translate into a better life for North Koreans.

"Trump's statement demonstrates his appalling ignorance of what North Korea's government really is – a militarized, totally authoritarian regime that has systematically violated the rights of its people," said HRW's Robertson, adding that many North Koreans are angry with the US president saying Kim loves them.

"North Korean defectors overseas quite correctly point out that there is no evidence for that claim and they contend the opposite is probably more correct," said Robertson. "Ordinary North Koreans are deathly afraid of their government because they know it can arbitrarily imprison them for any reason and make their lives hell."

"If Kim really loves his people, then how can he explain why he's forced them to face starvation and deprivation, torture, forced labor and other abuses?  His gift of love to the denizens of gulags in the mountains should be their immediate and safe release."

Arnold Fang, East Asia researcher at Amnesty International, told DW that Kim will need to engage the international community and the UN system if North Korea wants to see progress.

"This means governments will need to press it more on its human rights record," said Fang, adding that in return, North Korea would have to stand up to accountability and international scrutiny on human rights.

"They still have not admitted to the existence of these prison camps. Kim Jong Un must come clean regarding the detention facilities in the country," said Fang.

"To return to any semblance of respectability in the international community, North Korea needs to undertake a whole series of human rights reforms," said Robertson.

However, as the final summit communique did not mention transparency on human rights abuse and President Trump avoided specifically addressing the issue, it will be more difficult to get Pyongyang to change its behavior.

Even if the Kim regime can use its abuse of the North Korean people to maintain power and sustain a weapons program while blaming western sanctions for humanitarian problems, according to Robertson, the North Koreans believe that Trump and the US "don't care so much about human rights."

"Kim Jong Un wants to end his pariah status, but that should only happen when real human rights accountability and reforms have been put in place to ensure that the DPRK's brutal, dictatorial government methods end," said Robertson.

"There can be no 'normalization' without North Korea completely changing its approach on human rights and admitting its culpability for past abuses."

North Korean leader Kim Jong Un has reportedly made his younger sister Kim Yo Jong an alternate member of the politburo, the communist country's top decision-making body. What do we know about Kim's enigmatic sister? (08.10.2017)