Donald Trump's trade war threats likely dominated Angela Merkel's meeting with the Chinese premier. But could rallying around a common economic foe push concerns over human rights and business practices to the side? 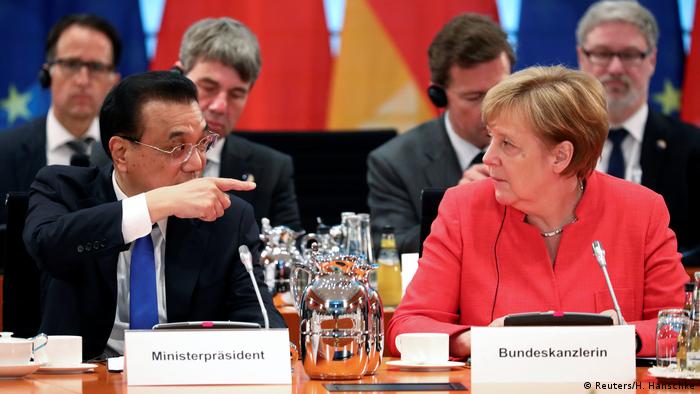 German Chancellor Angela Merkel's meeting with Chinese Premier Li Keqiang in Berlin on Monday carried more weight than usual, thanks to US President Donald Trump's apparent attempts to start a trade war with the rest of the world.

The resulting solidarity between two of the world's biggest exporting economies superseded all their differences when the two leaders met during the fifth German-Chinese government consultations.

"We are interested in friction-free trade," Merkel said during a press conference on Monday afternoon, before emphasizing that both Berlin and China are committed to "multilateral order." She also welcomed the fact that China's financial markets had been opened to German firms, and that the Chinese firm CATL had announced a plan to open a battery factory for electric cars in eastern Germany.

For his part, Li said that free trade was vital for "revitalizing the world economy."

A statement by Merkel's party, the Christian Democratic Union (CDU), was keen to underline that "Germany and China are united by their interest in working together on progress and solutions for great, global issues."

And yet even friendly words from the CDU couldn't hide the ongoing antagonism between Germany and China — after all, just like the US, Germany has been complaining for some time that German companies don't get fair access to Chinese markets, and that German technology and expertise is too often copied or stolen in China.

And then, a little further down the list of issues on the CDU's press statement, there was the problem of human rights in China — another long-term moral quandary for Germany, albeit one rarely addressed publicly by cabinet ministers.

The two issues of trade and human rights are difficult to separate. China became Germany's biggest trading partner in 2016, the same year that Jiang Tianyong, one of the country's most important human rights lawyers, met both Merkel and then-Economy Minister Sigmar Gabriel.

According to his wife, Tianyong was arrested three weeks later, before being sentenced to two years in prison in November 2017. The German organization International Society for Human Rights is convinced that his meeting with the chancellor led directly to his imprisonment (though United Nations human rights rapporteur Philip Alston said at the time that the lawyer's incarceration was a reprisal for his cooperation with Alston during a visit to China).

The German government's own human rights commissioner, Bärbel Kofler of the Social Democratic Party, addressed the issue on Monday, telling the RND newspaper network that the civil rights situation had "worsened significantly in the last few years."

"This is particularly noticeable for the critical civil society, for human rights lawyers, journalists and bloggers," she said.

Kofler also expressed concern about the treatment of ethnic minority groups in China, particularly the Uighurs, a Turkic Muslim group, at home in China's west. The US government-funded news group Radio Free Asia reported in January that some 120,000 people were being held in a "political re-education" detention camp system in the Xinjiang region, though researcher Adrian Zenz told DW that the number could well be over 200,000.

Germany's human rights commissioner also raised concerns about the "social credit" system being introduced in China, which ranks citizens by their social behavior.

Nevertheless, Kofler made sure to underline that "regular and direct exchanges" with the Chinese government remained important. "Bilateral talks, political consultations, but also other formats like the dialogue about the rule of law and human rights are forums in which the German government can and will specifically address the human rights situation alongside the breadth of relations to China," she said.

But it's unlikely that anyone higher up in the German government will be making similar public statements. Merkel's typical response to human rights abuses in China has been what is known as "silent diplomacy," in other words, bringing up concerns in private meetings but avoiding any temptation to embarrass Li in public.

Meanwhile, plenty of German China observers have brought up their own complaints. Mikko Huotari, deputy director of the Mercator Institute for China Studies, said in an interview that the German government should push for investigations and changes following the reports from Xinjiang.

Huotari also pointed out that repression in China could easily impact German institutions working there. "The fact that German foundations are currently not really able to work in China after the introduction of the law for the regulation for nongovernmental organizations is another burden on bilateral relations," he said.