Is he a beacon of hope, a future president or just a US puppet? Venezuela's self-declared leader, Juan Guaido, has told DW he is confident he will prevail over Nicolas Maduro in his country's power struggle. 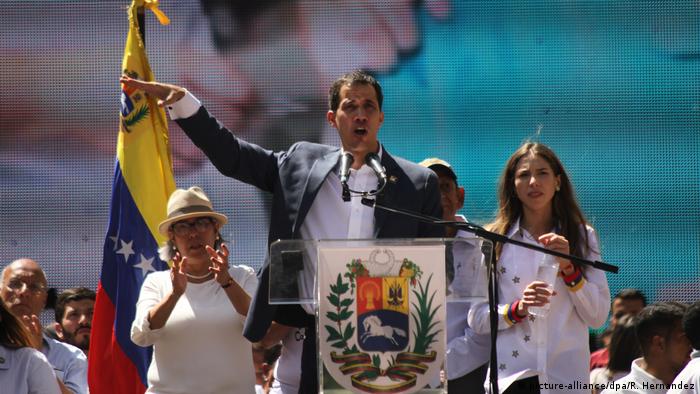 Juan Guaido, the self-declared interim president of Venezuela, says he wants to "put an end to usurpation, form a transitional government and make free elections possible."

It is his job, Guaido told DW's Oscar Schlenker, to keep on pushing for this process. Asked whether he sees himself as Venezuela's next president, he responded: "We will see who will run in the free elections."

There is still a long way to go before free elections, however. The power struggle between the 35-year-old Guaido and President Nicolas Maduro may have reached a crucial stage. Many people fear the opposition will run out of steam, that it will not be able to keep up the pressure on the streets or that the international community will soon turn to another trouble spot if it sees no development in Venezuela. Nevertheless, Guaido is confident his side will prevail in the end.

"Time is running out for Nicolas Maduro, a government that has no future, no ideas and no support in the population," Guaido said, adding that Maduro faces "a movement that is growing, and we will not retreat and postpone a process that is inevitable."

Delivery of relief supplies is part of that process. Maduro ordered the borders blocked, but food aid has nevertheless arrived in the country. "We managed to hand out a small portion of the humanitarian aid to save lives today: 4,500 nutritional supplements for malnourished expecting mothers, to prevent spinal bifida and other ailments, to save unborn lives," he said, without providing details on how the supplies entered Venezuela. Guaido conceded that it was not enough, but "sufficient for a short period of time" and a small but important victory against Maduro, who has dismissed the deliveries as political theater and a pretext for a US military intervention.

At a rally in Caracas on Tuesday, Guaido said aid would be bought into the country on February 23. "It's sure that the humanitarian aid will enter Venezuela because the usurper will have no choice but to leave Venezuela," he told the crowd. "We have almost 300,000 Venezuelans who will die if the aid doesn't enter. There are almost two million at health risk," he said.

The power dispute in Venezuela has been fueled by US President Donald Trump, who has threatened Maduro with serious consequences if he does not surrender power peacefully. "All options are on the table," Trump said three weeks ago. The US has a long history of meddling in Latin America, often with disastrous consequences.

Maduro has said that Guaido is trying to set up "a puppet government" in Venezuela.

"Maduro is running out of arguments," Guaido said. "I have made it clear that Venezuela will take all decisions with sovereignty, we will decide what forces are needed to end the usurpation." He added that he never claimed there could be a US military intervention, which he called a "very explosive issue." 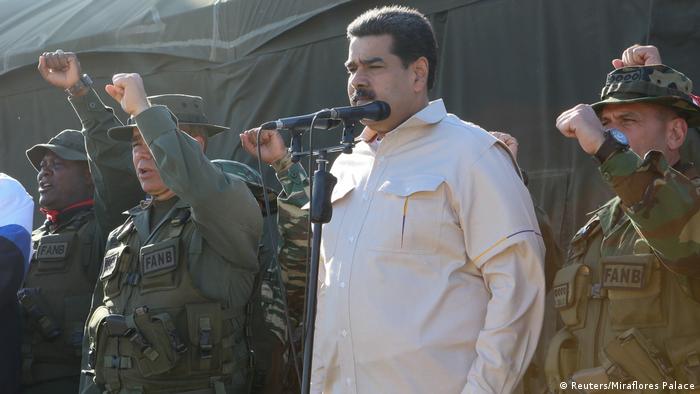 The military has largely remained loyal to Maduro

Clear message to the military

Guaido said he is still hoping for a change of power without foreign help. To do so, he will almost certainly need the support of Venezuela's military. Guaido claimed that "80 or 90 percent of the soldiers feel the same as 80 percent of the population," pointing out that the soldiers "cannot live on their salaries, they are persecuted, their families want to leave the country or they die because they have no medicine."

Guaido is counting on the amnesty law passed by Venezuela's parliament that guarantees soldiers impunity if they participate in the restoration of democratic order. However, with a few exceptions, the military has continued to stand by Maduro.

Guaido made it clear the military must allow aid supplies to reach the civilian population. "If they do not, we regard that as a crime against humanity," Guaido argued.

"In Venezuela, we live in a dictatorship that threatens people with weapons and prison," Guaido concluded, adding that what the movement has begun can no longer be stopped. The government can go ahead and "continue the only things they know: repression, persecution and torture, or just stealing Venezuela's money," he said. "But we will create a peaceful and democratic transition for the good of our people."