The government's block on aid entering Venezuela "could be considered a silent genocide," interim leader Juan Guaido told DW. The opposition managed to deliver some supplies ahead of new protests. 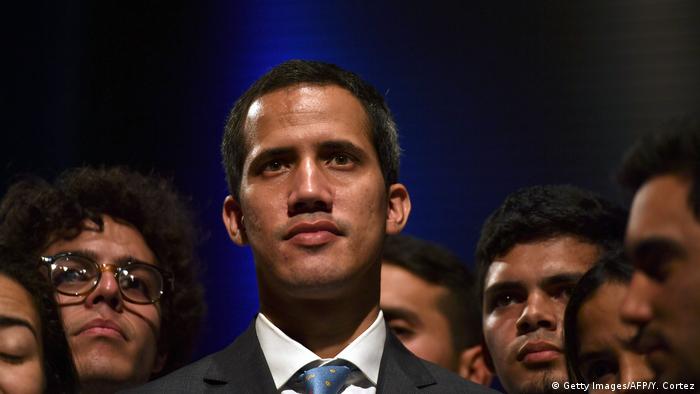 Government opponents in Venezuela are preparing a large march in Caracas on Tuesday to pressure President Nicolas Maduro into allowing humanitarian aid into the country.

Supplies of food, medicine, and hygiene products are currently stockpiled in the Colombian city of Cucuta, but Venezuelan troops have blocked the bridge leading to the border town so they can not be brought into the country.

In an exclusive interview with DW, opposition leader Juan Guaido said the opposition found a way to deliver some aid to children and pregnant women.

"We managed to hand out a small portion of the humanitarian aid to save lives today: 4,500 nutritional supplements for malnourished expecting mothers, to prevent spinal bifida and other ailments, to save unborn lives," he told DW correspondent Oscar Schlenker, without providing details on how the supplies entered the country.

"We also handed out 85,000 nutritional supplements for malnourished children to stabilize them," Guaido added. "That represents over one million portions but it is not enough."

He also warned that those who block the aid from entering would be put on trial.

"What is happening in Venezuela could be considered a silent genocide," Guaido said. "You have hundreds of thousands who have died due to the shortage of food and medicine."

Guaido is set to lead the central pro-aid march in eastern Caracas on Tuesday.

At the same time, Maduro is scheduled to lead a march of his own supporters, young leftists who would protest "imperialist intervention" in the center of the city.

Maduro has repeatedly warned that aid deliveries would be a mere pretext for a military invasion.

"Venezuela won't allow the spectacle of fake humanitarian aid because we're no one's beggars," he told reporters on Saturday.

On Sunday, dozens of doctors protested at the Venezuelan side of the border to demand delivery of aid from Cucuta.

Visiting Colombia on Tuesday, Germany's President Frank-Walter Steinmeier decried "dramatically bad" conditions facing the people in Venezuela, who are struggling to come by basic goods. Germany and dozens of other Western countries have already recognized Guaido as interim president of the troubled country.