Venezuela's interim President Juan Guaido has urged the military to let trucks carrying food aid and medicine into the country. However, a bridge at a major crossing with Colombia remains barricaded. 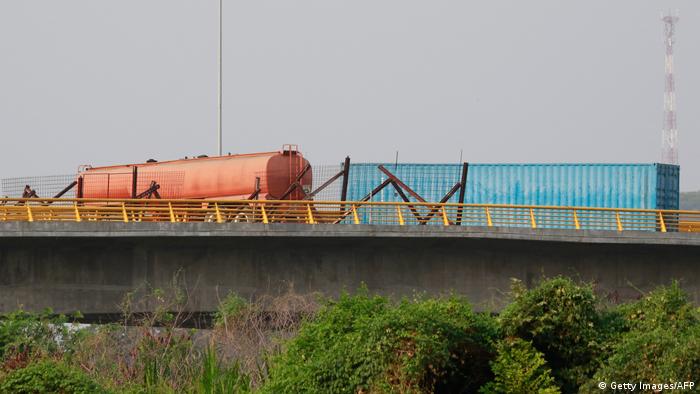 Venezuela's interim President Juan Guaido told Colombian radio on Wednesday that the Venezuelan military had to choose between "a dictatorship that does not have an iota of humanity, or to side with the constitution."

According to Colombian officials, a giant orange tanker and two large blue containers were placed across highway lanes, along with makeshift fencing, by Venezuelan soldiers.

"Once again the Armed Forces have a direct order at this time: allow the entry of the necessary humanitarian aid that will take care of their families," Guaido said.

Earlier, US Secretary of State Mike Pompeo wrote on Twitter that Venezuela's military was deliberately blocking  aid "under Maduro's orders."

"The Maduro regime must LET THE AID REACH THE STARVING PEOPLE," he said.

Rampant hyperinflation has forced millions of Venezuelans to leave their homes or go hungry, with basic goods and medicine in very short supply.

In the city of Cucuta, close to the Tienditas bridge, opponents of acting President Nicolas Maduro are putting together plans with US officials to open a "humanitarian corridor" into Venezuela, even if that means going past the military.

Read more:  How long can Maduro hold on?

Maduro has long rejected foreign humanitarian intervention, claiming it amounts to outside intervention.

Guaido declared himself interim president last month, in a high-risk challenge to Maduro's authority. The move has earned him the backing of almost 40 countries around the world, and support for his calls to have new elections.

Meanwhile, the UN has said it will not join any initiatives to resolve the political crisis in Venezuela in order to remain neutral.

Foreign reporters have been arrested in Venezuela on charges of visa violations. The government claims media are manufacturing crisis, but critics argue that officials are targeting journalists as a means of censorship. (04.02.2019)