EU foreign policy head Federica Mogherini said at a summit in Uruguay that Venezuela must let the people determine its future. While aid has arrived on the border to Venezuela, Maduro has vowed to block its delivery. 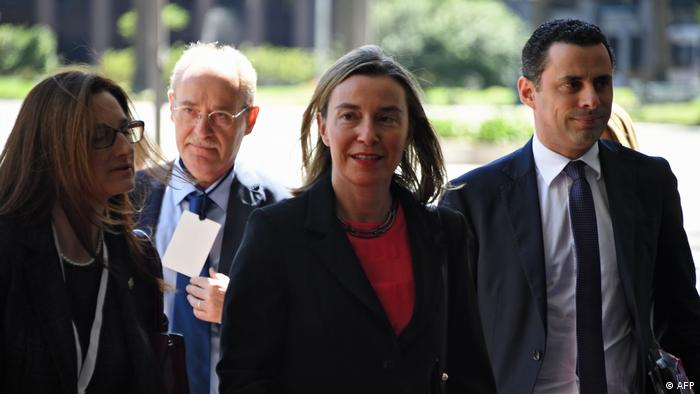 European and Latin American leaders met in Montevideo, Uruguay, on Thursday, as the EU pushed for new elections and a peaceful resolution to the political turmoil in Venezuela.

"This is not only the most desirable result but is the only result if we want to avoid more suffering and a chaotic process," said EU foreign policy chief Federica Mogherini.

Her sentiments were echoed by Uruguayan President Tabare Vazquez, who said, "The biggest dilemma facing Venezuela is between peace and war, which is why we are insisting in our call for calm from the parties involved and the prudence of the international community."

The appeal for prudence from the global community may be an allusion to the United States and Latin American countries that have called for a more hands-on approach to resolving the crisis.

This week, Europe joined the US in recognizing opposition leader Juan Guaido as interim president of Venezuela.

Although embattled President Nicolas Maduro was re-elected last year, many called the vote a sham, as Maduro had greatly weakened the power of the opposition-held National Assembly and created a new legislature that would support him.

As Maduro looked unlikely to reverse course, even while Venezuela plunged deeper into economic and humanitarian crises, Guaido, the president of the National Assembly, used an obscure part of the Venezuelan constitution to declare himself acting president on January 23.

The Venezuelan ambassador to the EU, Claudia Salerno Caldera, backed Maduro in an interview with DW, saying that foreign support for Guaido is meaningless because "a president … doesn't hold on because foreign countries ask them, or like them or not."

Caldera also denied that there were hundreds of people in jail in Venezuela simply for opposing Maduro:  "I don't think that many of the people that are right now being prosecuted by the public ministry are there because of their political views, but actually because of specific actions."

In stark contrast to Maduro, Guaido approved a plan on Wednesday to allow foreign aid into the poverty-stricken country. Maduro, meanwhile, maintains sway over the military. According to the US, this is because the army's top generals have enriched themselves handsomely under Maduro's government.

On Thursday, aid convoys reached the Colombian border, where desperate Venezuelans waited to see if Maduro would order the military to allow them to pass. The military had previously set up barricades on a bridge between the two countries to keep aid from getting in.

At the summit in Montevideo, EU nations such as France, Germany, Italy and the Netherlands met with delegates from Bolivia, Costa Rica, Mexico and Uruguay. The group said it wants plans from Venezuela for free elections within 90 days.

Although Mexico and Bolivia were some of the few regional powers not to express support for Guaido, the EU's Mogherini said the "International Contact Group" was united in wanting a resolution without bloodshed.

"We can have different points of view and readings about the causes of the crisis," Mogherini said. "But we share the same objective, wishing to contribute to a politically peaceful and democratic solution."