Tillerson′s North Korea comments cause unease in East Asia | Asia| An in-depth look at news from across the continent | DW | 20.03.2017

Despite the US' warnings, analysts say it is at present unlikely to launch a pre-emptive strike against North Korea. But they warn that a minor miscalculation by either side could quickly escalate. Julian Ryall reports. 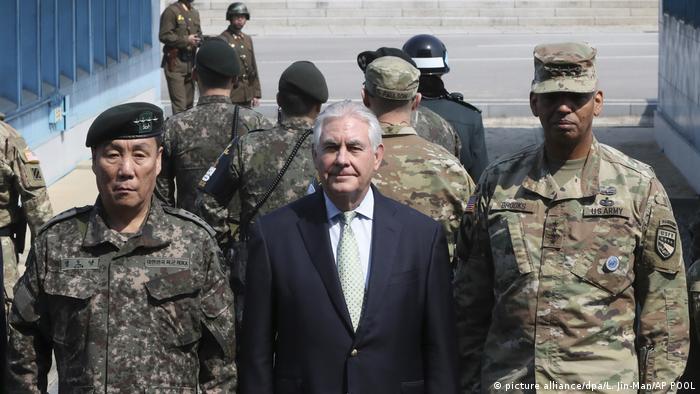 The public reactions of China, South Korea and Japan to US Secretary of State Rex Tillerson's comments that the policy of "strategic patience" towards North Korea is over and a pre-emptive strike is an "option on the table" have been muted and diplomatic.

Beijing reiterated its position that dialogue is the most appropriate way forward, while both Seoul and Tokyo opted to underline their commitment to their bilateral security agreements with the US.

Behind the facade, however, Tillerson's signaling of a tough new line towards Pyongyang will have likely caused consternation in all three capitals. While Tillerson's comments may never actually transpire into action, they have done nothing to ease tensions in a region that is already on edge thanks to North Korea's unpredictable and nuclear-armed regime.

"China will have been extremely worried by his comments, particularly the suggestion that the US could carry out a first-strike attack on North Korean targets," said Stephen Nagy, an associate professor of international relations at Tokyo's International Christian University.

"There are a number of potential negative consequences, including the possibility of regime collapse in the North and all the problems that would go with that, such as a flood of asylum seekers into northeastern China, the removal of a broadly pro-Beijing leadership and the effects on the complex geopolitical situation in the region.

"For South Korea, the biggest immediate concern over a pre-emptive first strike would be the question of whether Kim Jong Un has set in motion a system for an attack on the South," Nagy said, pointing out that Seoul is well within range of thousands of conventional North Korean artillery units stationed close to the Demilitarized Zone that divides the peninsula.

Japan will also be concerned over a potential North Korean counterattack, Nagy told DW, adding that an analysis of the North's most recent missile launches suggest that they were tests of the ballistic trajectories required to reach US military facilities in Japan.

Tokyo is also worried about potential North Korean refugees taking to sea in an attempt to reach Japan, as well as Chinese troops occupying the northern half of the Korean peninsula in an attempt to prop up a puppet regime in Pyongyang.

Tillerson's warning was echoed on Sunday by Devin Nunes, a Republican politician from California, who insisted that the US should be prepared to carry out a pre-emptive strike against North Korea because Pyongyang was close to being able to deliver a nuclear warhead to the continental US.

While President Donald Trump has not commented specifically on Tillerson's mission to northeast Asia, he used Twitter to exclaim, "North Korea is behaving very badly. They have been 'playing' the United States for years. China has done little to help!"

Yet, despite their claims, Nagy does not believe the new US administration will deviate too far from the policies of the previous administration under President Barack Obama.

In China, US Secretary of State Rex Tillerson has pledged to work with the Beijing government to rein in nuclear-armed North Korea. China's foreign minister called for "cool heads." (18.03.2017)

"Trump has brought mercuriality into politics and he will casually say that his administration will do something, such as a pre-emptive strike against North Korea, casually and without reflecting on the challenges that are involved," Nagy said.

"And we have to separate his administration from the military and diplomatic establishment in the US, who would without question prefer to avoid any sort of armed clash."

Daniel Pinkston, a professor of international relations at the Seoul campus of Troy University, says the tough-talking may be designed for a domestic US audience and could merely be an effort to differentiate Trump from his predecessor.

"But I don't see how things could change," he said. "It is hard to tell whether this is real or bluster and just slogans, but what can the US realistically do differently?

"To my mind, the biggest question that all this raises is over the credibility of the US and its global reputation going forward," he said.

And while the US may have an overwhelmingly powerful military machine, Pinkston believes it would be virtually impossible for Trump to order an unprovoked attack on a sovereign nation without the support of its allies - both regionally as well as globally.

"I do not see how, under current conditions, the US could violate the Korean War armistice, defy the United Nations Charter and its security treaties and alliances in East Asia," Pinkston says. "And how could they conduct military operations without the assistance of South Korea and Japan, which would be very unlikely to support that sort of unilateral action."

The only scenario that might play out, Pinkston suggests, would be an "accident or miscalculation" by either side that quickly escalates out of control.

"I believe that the cost of using force would far outweigh any perceived benefits," he said, adding that the war in Iraq "would look like child's play in comparison with what would go on" on the Korean peninsula if a full-scale conflict did break out.