Tillerson reiterates US support for Japan and South Korea

The US Secretary of State has told Japan the US supports it and South Korea in countering threats from North Korea. Recalibrating relations with China is also high on the agenda of his trip to Asia. 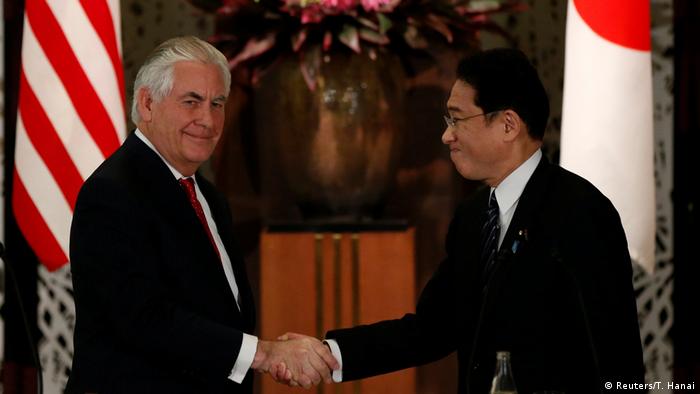 US officials have become concerned by North Korea's accelerating progress towards building an intercontinental ballistic missile that could reach US mainland cities.

President Donald Trump caused anxiety during his election campaign by suggesting US allies Japan and South Korea need to do more to defend themselves. But since taking office he has been careful to offer full support, a message that Tillerson reiterated, saying the US and Japan had an "unwavering bond."

"The US-Japan alliance remains the cornerstone of peace and stability in the Asia-Pacific region," Tillerson told Kishida, also stressing the importance of three-way cooperation with South Korea.

Japan and South Korea both host tens of thousands of US troops.

Kishida, meanwhile, thanked Tillerson for US backing. "I highly value the fact that you chose Japan as your first place to visit in Asia," he said, adding that it indicates the "importance" the US attaches to the relationship.

Tillerson travels to South Korea on Friday, before heading to China on Saturday, where he is expected to press China to help restrain North Korea.

State Department spokesman Mark Toner told reporters this week that efforts to convince China to pressure North Korea were the "looming challenge" in trans-Pacific relations. "He's going to have an opportunity at every stop to talk about next steps or what we do now, with respect to North Korea," he said.

In a news conference on Wednesday, China's Premier Li Keqiang said "there are bright prospects for China-US cooperation." This after recent comments in which China's Foreign Minister Wang Yi implied the US and North Korea were equally at fault and moving towards a "head-on collision."

Washington and Beijing have clashed in recent months over developments in the South China Sea, where the Chinese have been seen by the US as flexing their military and diplomatic muscles.

Meanwhile, the Chinese government is concerned about Washington's decision to deploy the THAAD missile defense program in South Korea.

Washington insists THAAD is a defensive system deployed to protect the South and US bases, but China fears its advanced radar system undermines China's nuclear deterrent.

A small group of American expats protested outside the US embassy in Tokyo, demanding former ExxonMobil chief executive Tillerson respect the Paris climate change accord.

US warships from an aircraft carrier group have started routine patrols in the South China Sea. China warned the US last week about challenges to its sovereignty. (19.02.2017)