"Feasting his eyes on the trails of ballistic rockets," he praised the Hwasong artillery unit that launched them, the report said. Kim also said that the rockets were "so accurate that they look like acrobatic flying corps in formation."

The artillery units are "tasked to strike the bases of the US imperialist aggressor forces in Japan in contingency," KCNA added.

Previously, South Korean and Japanese officials reported that Pyongyang fired the missiles, at least three of which landed as close as 300 kilometers (186 miles) from Japan's northeast coast.

South Korea said that the rockets traveled about 1,000 kilometers (620 miles) from the launch site and reached a maximum altitude of 260 kilometers (162 miles). The launch was apparently in response to the start of annual joint exercises of US and South Korean forces last week.

According to the KCNA report, Kim also ordered his military "to keep highly alert as required by the grim situation in which an actual war may break out anytime."

The launch drew condemnation from Japan and the international community. On Tuesday, Japanese Prime Minister Shinzo Abe discussed Pyongyang's move with the US President Donald Trump.

The US currently has around 54,000 troops stationed in Japan. A US State Department spokesman, Mark Toner, was quoted as saying that Washington was "prepared to use the full range of capabilities at our disposal against this growing threat." 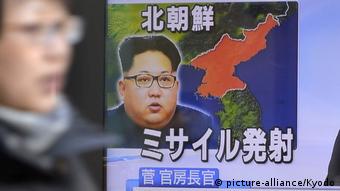 Just a day after the North Korean test launches, parts of a US missile defense system arrived in South Korea.

The Terminal High-Altitude Area Defense system, or THAAD, is designed to deter North Korea, but its planned deployment has angered not just Pyongyang, but China and Russia as well. Both Beijing and Moscow see the system's powerful radars as a security threat.

But the US and South Korea say the system is defensive in nature. The US military said in a statement that THAAD is meant to intercept and destroy short and medium range ballistic missiles during the last part of their flights.

"Continued provocative actions by North Korea, to include yesterday's launch of multiple missiles, only confirm the prudence of our alliance decision last year to deploy THAAD to South Korea," Adm. Harry Harris, head of the U.S. Pacific Command, said in the statement. "Such actions violate Security Council resolutions and seriously undermine regional peace and stability," Guterres' spokesman Farhan Haq said in a statement. "The Secretary-General reiterates his call for the [North Korean] leadership to refrain from further provocations and comply fully with its international obligations."

The UN Security Council is set to hold an emergency meeting on the North Korean missile launches on Wednesday.