Amid heightened tension between Soul and Pyongyang, the US and South Korean militaries started a set of annual drills. Several hundred thousand soldiers are expected to be involved in two months of exercises. 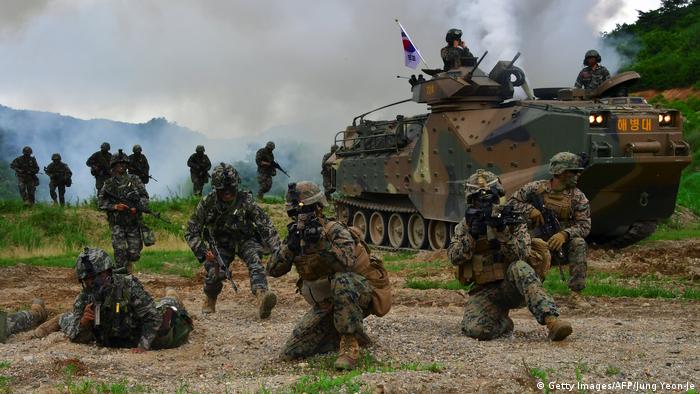 Troops from South Korea and the United States began their annual joint drills to test defense readiness, particularly against North Korea, on Wednesday.

While Washington and Seoul characterized the exercise as purely defensive, North Korea has repeatedly condemned the joint drills as preparations for an attack.

Tension on the Korean peninsula has heightened recently. On February 12, North Korea performed the first ballistic missile test since US President Trump took office. According to the South Korean military, this test showed that the regime in Pyongyang had progressed in its missile capabilities. North Korea - along with the United States but not South Korea - is among the countries worldwide that possess nuclear weapons. In 2016, North Korea had performed two nuclear tests and several missile launches, which have  sparked international outrage. 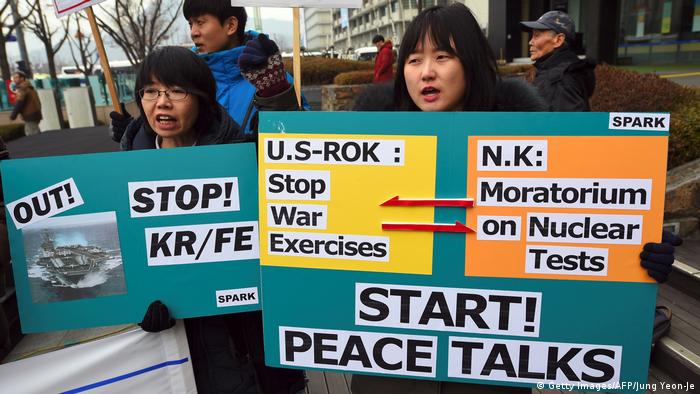 Outside the US Embassy in Seoul, dozens of people protested on Wednesday against the drill. They said that it would "bring the peninsula sharply closer to the brink of a nuclear war."

The United States and South Korea have long been military allies and strategic partners.

In a phone call on Wednesday, US Defense Secretary Jim Mattis told his South Korean counterpart that Washington remained committed to the defense of Seoul.

Last year, the two countries made the decision to build a missile defense system together. The so-called Terminal High Altitude Area Defense (THAAD) system, which would be used to shoot down ballistic missiles, is meant to protect South Korea from North Korean warheads.

The system is controversial because other countries - in particular Russia and China - are worried that its radar could reach far beyond South Korean territory. South Koreans who own land close to the planned THAAD location also object to its construction.

This week, South Korea signed a land swap deal with the Lotte Group to secure the land to station the THAAD system. According to the government in Seoul, the missile defense system is set to be operational by the end of the year.

South Korea, US hold military drills amid tension with North

Annual military exercises have got underway involving tens of thousands of troops, amid a new threat from North Korea. Pyongyang has threatened a pre-emptive nuclear strike. (22.08.2016)

Pyongyang is trying to improve its negotiating position while testing the new US government. And competition between the US and China means the isolated country doesn't have much to fear, says DW's Alexander Freund. (13.02.2017)