North Korea has condemned the military exercises as "little short of a declaration of a war." The computer-simulated program also involves 50,000 Korean troops and the 28,500 US soldiers based in South Korea. 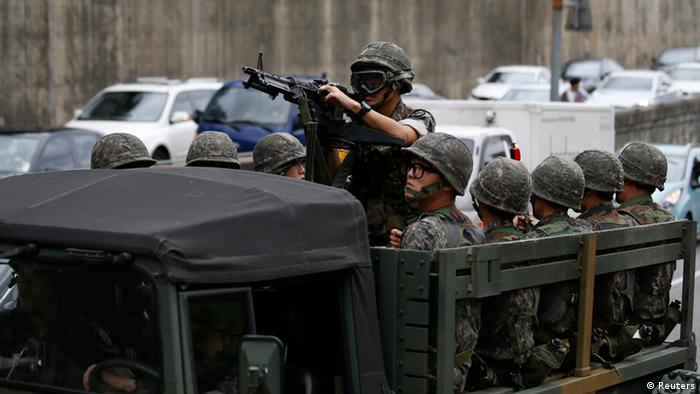 The US Combined Forces Command said the exercises were "routine and defense-oriented," and "not connected to any current world events."

Seven United Nations Command Sending States are due to participate in the Ulchi Freedom Guardian 2015 exercises which start on Monday and continue until August 28. They include Australia, Canada, Colombia, Denmark, France, New Zealand and the UK.

The US said it had informed the North Korean People's Army of the exercise dates and the "non-provocative nature of this routine training."

But Pyongyang said it considered the exercises to be provocative and threatened the "strongest military counter-action."

"Such large-scale joint military exercises... are little short of a declaration of a war," North Korea's Committee for the Peaceful Reunification of Korea said last week.

As part of its response, the South started up loudspeakers placed along the border to send out loud propaganda broadcasts towards the North. The speakers had not been used in more than ten years.

On Friday Pyongyang denied it had placed the mines and on Saturday called on Seoul to stop the broadcasts.

"North Korea must wake up from its daydream that it can maintain its regime through provocations and threats ... these will only lead to isolation and destruction," President Park Geun-Hye said on Saturday.

The President is holding a National Security Council meeting on Monday.

The armistice which brought the Korean War to an end in 1953 was never replaced by a full peace treaty. So technically the two Koreas are still at war.

North Korea has held celebrations at midnight to commemorate the end of Japanese occupation and usher in the country's new time zone. The nation's clocks were turned back 30 minutes. (15.08.2015)

Guantanamo: US moves to try suspects in Bali bombings 13m ago