Is US cyberdefense a key weapon against N. Korea′s missile program? | Asia| An in-depth look at news from across the continent | DW | 09.03.2017

Is US cyberdefense a key weapon against N. Korea's missile program?

Amid rising tensions on the Korean peninsula, a recent report indicates that the US has successfully used cyberattacks to disrupt North Korean missile tests, opening a new "invisible front" against the bellicose state. 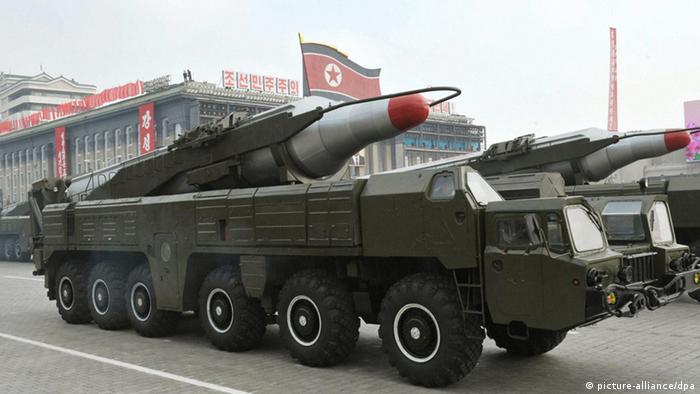 There is currently a big show of force happening in Northeast Asia.  On March 7, for the second time in a month, North Korea fired missiles into the Sea of Japan, rattling both the nerves of its neighbors and their allies in the West. Pyongyang raised tensions further by adding that the recent launch was a drill for attacking US military bases in Japan.

It came just a day after the US moved a missile defense system known as Terminal High Altitude Area Defense (THAAD) into positions in South Korea. And last week, the US and South Korean militaries began what is being described as "the largest ever" military drill between the two countries.

China's Foreign Minister Wang Yi said on Wednesday that both sides were racing towards a "head-on collision."

But behind this very public display of hostility is a complex system of information technology - a less visible but crucial strategic element that defense departments and experts are increasingly viewing as the future of warfare.

And an investigative report published on March 4 in the New York Times indicates that the US, under former President Barack Obama, indeed used cyberattacks in an attempt to disrupt North Korean missile tests.

The report came after an eight-month investigation into US Defense Department records and missile defense documents. The curiosity of journalists David Sanger and William Broad was sparked after they noticed that North Korea's medium-range missiles - called "Musudan" - tested during 2015-16 were exploding and veering off course and had a failure rate of 88 percent.

If US cyberattacks contributed to, or were the reason behind these missile failures, it would be a key success for the US in conducting a new type of warfare. However, it is very difficult to independently verify the causal link between US cyberattacks and defective missiles.

"We'll never know for sure, because North Korean missiles crash on their own without any outside help," James Lewis, a leading expert on international cybersecurity at the Center for Strategic and International Studies (CSIS) and a contributor to the North Korea think tank 38 North, told DW.

"On the other hand, some say the military officers recently executed by Kim Jong Un were killed because they had failed to block the missile hacks."

Regardless of whether the US bugged North Korean missiles, cyberwarfare clearly seems to be on the US military's strategic agenda and Washington certainly has the technological capacity to implement cyberattacks.

The Cyber Deterrence Defense Report, released by the Defense Science Board at the US Department of Defense in February, issued recommendations that would "increase US confidence and adversary uncertainty" in areas of cyberdefense.

US rejects calls for diplomacy talks with 'irrational' North Korea

China has warned that hostilities could get out of control as the US refused calls to back down from military actions. The US says the onus lies with North Korea for peaceful negotiations. (08.03.2017)

As president, Barack Obama undertook a series of cyberattacks against North Korea's missile program, US media report. After the US implemented the strategy, several launches failed or the projectiles veered off course. (05.03.2017)

Among specific recommendations in the report, "select cyberoffense" and "select long-range conventional strikes" were identified as priorities in coming up with a strategic cyberdefense policy.

Whether these capabilities can actually be expanded to continually disrupt North Korea's missile program remains to be seen and this uncertainty highlights the sensitivity and vulnerability of cyberweapons.

"Once you use it, it's gone," said Lewis. "If it was still a secret, it would have been effective.  Now we'll need to do something else," he noted, adding that he doubted the Trump administration would seek to expand cyberattacks on North Korean missiles. "Cyber capabilities will continue to grow, as it's important for any advanced military to have cyber capabilities, but the rabbit is out of the hat on this one."

Riki Ellison, Chairman of the Missile Defense Advocacy Alliance (MDAA), a US-based defense advisory nonprofit, told DW that the new US administration would implement cyberweapons to disrupt supply chains in missile production, but added that effective capabilities would only become apparent if the weapon is activated.

"Once you expose your cybercapability in the network, you no longer are effective," said Ellison.

And the most likely US cyber adversaries, China and Russia, will surely be paying attention to the effectiveness of US cyber deployment. If it becomes clear that the US is successfully using cyberweapons to disrupt conventional defense systems, it could trigger a cyber arms race.

"Both [China and Russia] are very worried about the US hacking their weapons systems," said Lewis. "Their answer will be to try to make their networks more secure, and speaking as a former UN negotiator, they are not interested in 'arms control.' It's a new battlefront in an invisible war."

The level of technical sophistication required to have caused the North Korean missiles to explode or veer off course would be a clear indication that the US either could have somehow introduced malware into the design of the Musudan missiles or was able to remotely disrupt its launch systems.  Either would be a major advancement in the use of cyberwarfare.

For North Korea to retaliate against weapons systems hacking, they would first need to recognize the intrusion. According to Ellison from the MDAA, even with Chinese support in evading cyberattacks on critical systems in weapon supply chains, North Korea would find it difficult to identify a cyberattack on its missile systems. "North Korea's systems are antiquated, old, and a lot are not on the network," he said.

However, North Korea has shown the ability in the past to carry out cyberattacks and is considered by the US as a primary international cyberthreat. Unsurprisingly, South Korea remains digitally - and physically - the North's primary target.

"The North Koreans routinely hack South Korea," said CSIS's Lewis. "And everyone knows about Sony.  They could carry out another Sony-style attack, but Kim will have to decide if retaliating is worth the risk."

Other potential cybertargets could include disrupting US missile systems in the Asia Pacific or another hacking of US companies as seen with Sony in 2014. A direct military response, however, would transform an invisible conflict into a physical one. For now, at least, the regime in Pyongyang has stopped short of using its weapons for large-scale destruction.

But on March 7, North Korea's official news agency KCNA reported that their missiles were "so accurate that they look like acrobatic flying corps in formation." It seems they may have fixed the bugs from last year.