US rejects calls for diplomacy talks with ′irrational′ North Korea | Asia | An in-depth look at news from across the continent | DW | 08.03.2017

US rejects calls for diplomacy talks with 'irrational' North Korea

China has warned that hostilities could get out of control as the US refused calls to back down from military actions. The US says the onus lies with North Korea for peaceful negotiations. 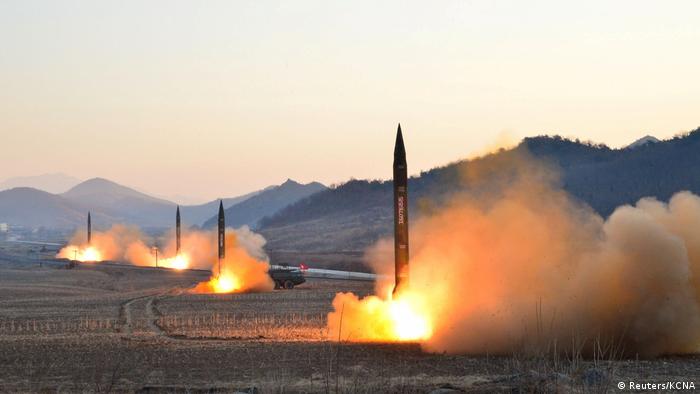 The US rejected on Wednesday China's appeal for talks with North Korea, saying its leader Kim Jong Un was behaving "irrationally."

Pyongyang has temporarily barred all Malaysian citizens from exiting North Korea in a row over the assassination of the brother of Kim Jong Un. In turn, Malaysia banned Pyongyang's diplomatic staff from leaving. (07.03.2017)

Pyongyang is trying to improve its negotiating position while testing the new US government. And competition between the US and China means the isolated country doesn't have much to fear, says DW's Alexander Freund. (13.02.2017)

The new US defense secretary has soothed concerns that the Trump administration would turn its back on South Korea. The two countries plan to move forward on the installment the THAAD missile defense system. (03.02.2017)

China had asked the US to halt joint military activities with South Korea in exchange for the suspension of North Korea's nuclear and missile programs. State Department spokesman Mark Toner said China's proposal was not a "viable deal."

"This is apples and oranges," he said. "What we're doing in terms of our defense cooperation with South Korea is in no way comparable to the blatant disregard that North Korea has shown with respect to international law."

"We are not dealing with a rational person," Haley told reporters after the UN Security Council discussed North Korea's Monday launch of four ballistic missiles.

"It is an unbelievable, irresponsible arrogance that we are seeing coming out of Kim Jong Un at this time," Haley said.

She said the new US administration was reevaluating how it would handle North Korea and that "all options were on the table."

She added that the US must see "some sort of positive action" from North Korea before it could take Kim Jong Un's regime seriously, making it clear that North Korea had to act first.

"We have not seen any goodwill at all coming from North Korea," Haley said. "I appreciate all my counterparts wanting to talk about talks and negotiations (but) we are not dealing with a rational person."

After joint military drills between the US and South Korea, North Korea fired the missiles into the sea off Japan's coast on Monday. In the past year Pyongyang fired dozens of missiles and conducted two nuclear tests in defiance of UN resolutions.

North Korea's Foreign Ministry warned on Wednesday that it would "reduce the bases of aggression and provocation to ashes with its invincible Hwasong rockets tipped with nuclear warheads and reliably defend the security of the country and its people's happiness in case the US and the South Korean puppet forces fire even a single bullet at the territory of the DPRK [North Korea]."

China's UN Ambassador Liu Jieyi warned that "if you look at ... the development of events now on the Korean Peninsula there's a real danger, there's a real risk."

The alternative to China's proposal "would be escalation of tension, and the situation may get out of control," he told The Associated Press news agency.

"We should avoid any worsening of the situation, or still any conflict, any sparks triggering a larger-scale conflict or even war on the Korean Peninsula," Liu said.

"Linking this exercise to anything else, which is illegal nuclear and missile provocation by North Korea, is inappropriate and unacceptable, and I think this is just trying to link the un-linkable," he said.

"All kinds of options have been exhausted so far," Cho said, "So the only available means to change the North Korean behavior fundamentally is to continue to keep up the pressure and sanctions on North Korea."